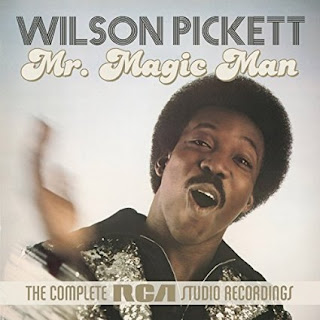 Wilson Pickett is best known for his 1960s recordings such as “In The Midnight Hour,” “Mustang Sally” and “Everybody Needs Somebody To Love.” In 1973, he began recording for RCA, and many of the tracks he recorded there showcase his songwriting as well as his singing, particularly from the first LP, Mr. Magic Man. Mr. Magic Man: The Complete RCA Studio Recordings contains four complete albums that Wilson Pickett released with RCA between 1973 and 1975, plus four bonus tracks. This two-disc set contains forty-two tracks, and nearly two and a half hours of music. This collection also includes new liner notes by Joe Marchese.

The first disc contains two complete records – Mr. Magic Man and Miz Lena’s Boy – and two bonus tracks. Mr. Magic Man opens with its title track, which was also released as a single. It’s kind of catchy, but definitely has a 1970s pop sound, and is not my favorite track. I prefer the following track, “Only I Can Sing This Song,” which Wilson Pickett wrote. He delivers a heartfelt and moving vocal performance here, singing of a lost love, of how he “watched a future pass me by.” Interestingly, the song isn’t just about the woman who broke up with him, but about being able to turn to his family for strength. “Love Is Beautiful” doesn’t quite work now, perhaps because of the woman’s goal: “You just wanted to be married, raise a family and be a mighty fine wife.” It seems that his mellower tunes on this LP work best, and I absolutely love “I Sho’ Love You.” Check out the way he holds onto the word “please” in the line “I told my emotions to please step aside.” So good. “I Sho’ Love You” was written by Wilson Pickett, Brad Shapiro and Dave Crawford. (Shapiro and Crawford also produced that album.) I also love “If You Need Me,” which is so beautiful and simple. At the beginning he sings, “If you need me, call me/If you need me, call me/Don’t wait too long/If things go wrong me/I’ll be home.” His vocal performance is just perfect, full of passion, and I also really like the piano part. “If You Need Me” was written by Wilson Pickett, Robert Bateman and Sonny Sanders, and is my favorite track from Mr. Magic Man.

Though there isn’t quite as much original material on Miz Lena’s Boy, I think in general it’s a better album. It opens with “Take A Closer Look At The Woman You’re With,” which was written by Wilson Pickett and Brad Shapiro. And right away it announces that this album is going to be funkier. “Lord have mercy/How about that?” The bonus tracks on this disc include the mono single version of this tune, which is just a bit shorter. Wilson Pickett delivers an excellent and original take on Chuck Berry’s “Memphis, Tennessee.” This is one of the highlights. It is so different from the original version, but works so damn well. I completely love those backing vocals, which are used sparingly and perfectly. And then there’s the horn. Geez, just everything about this track is wonderful. Plus, it’s such a great song to begin with. I still remember being surprised at just who it’s about the first time I ever heard the Chuck Berry version. If somehow you haven’t heard this song, I won’t spoil it for you here. Wilson Pickett also does a really good cover of Kris Kristofferson’s “Help Me Make It Through The Night,” and he delivers what is probably the best version of “Never My Love” I’ve ever heard.  “Soft Soul Boogie Woogie” is a fun tune, complete with hand-claps and a great beat, and the way Wilson sings it, the vocals are almost like a percussion instrument, contributing to the rhythm. The bonus tracks include the mono single version of this song. Also fun is “Two Women And A Wife.” Hell, just that title is fun. “Two Women And A Wife” was written by Wilson Pickett and Brad Shapiro. “Our great love affair is not meant to be/A man can love one woman, but he can never have three.”

The second disc contains two complete LPs – Pickett In The Pocket and Join Me And Let’s Be Free – and two bonus tracks. Pickett In The Pocket, originally released in 1974, opens with “Iron It Out,” an energetic and funky number written by George Jackson. That’s followed by a cover of Jesse Winchester’s “Isn’t That So.” The bonus tracks include the mono single version of this song. But for me, this LP really gets going with “I Was Too Nice,” written by Wilson Pickett, Brad Shapiro and Barry Beckett. It has a cool, easy groove. Here is a taste of the lyrics: “I’m crying tears alone/Gave up right for wrong/Made a sacrifice twice/I was too nice, lord, I was too nice.” And it’s followed by the fun “Don’t Pass Me By,” written by Wilson Pickett, Dave Crawford and Brad Shapiro. One of the best tracks, though, is “Young Boy Blues,” a song written by Doc Pomus and Phil Spector. This song was the title track for a Ben E. King album and later recorded by The Honeydrippers, but while both of those renditions are good, this version by Wilson Pickett is even better. Wilson really gets into it, and I love the backing vocals on this track. “Take Your Pleasure Where You Find It” is a funky number that was also released as a single. The bonus tracks include the mono single version. It was written by Paul Butterfield and Bobby Charles. Pickett In The Pocket concludes with a wonderful, moving rendition of Jackie Verdell’s “You’re The One.”

Join Me And Let’s Be Free, the fourth and final album of this collection, opens with its title track, a song that Wilson Pickett wrote. It has something of a gospel feel, and lyrics that are a bit on the cheesy side: “Kick off your shoes of sadness/Try on this robe of love/Join me and let’s be free.” Shoes of sadness? Geez. And I could do without the Jesus song, “I’ve Got A Good Friend.” But there are some good tunes on this LP. “Smokin’ In The United Nations” is a fun track, with a spoken word section about Los Angeles: “All the way out here in Los Angeles, California/Where I heard it was nothing but pretty women, movie stars and people laying around on the beach with a whole lot of money.” Written by Kevin Beamish, Wilson Pickett and Yusuf Rahman, this song features the lines, “I had to build my house on a funky plantation/But don’t be surprised if you look up and see me smokin’ in the united nations.” Another highlight is “Good Things,” which features a totally delicious groove and some nice work on harmonica.