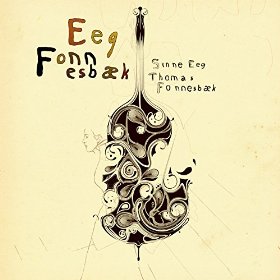 Sinne Eeg is an accomplished Danish jazz vocalist who has released several CDs in the past decade, her last, 2014’s Face The Music, winning the Danish Music Award for Best Vocal Jazz Album. On her new album, Eeg - Fonnesbaek, she teams up with bass player Thomas Fonnesbaek to deliver wonderful covers of some standards, as well as an original tune that Fonnesbaek co-wrote. This album is just bass and vocals, and so Sinne Eeg’s fantastic voice is really showcased here. It is laid bare, with no lush instrumentation to get immersed in. And yet the album also does not feel like it’s lacking anything. There’s never a moment when you’re wishing for another instrument.

Sinne Eeg and Thomas Fonnesbaek open the album with a delicious rendition of “Willow Weep For Me,” a song that has been covered by Sarah Vaughan, Diana Krall and Chad & Jeremy, among others. They begin it with the bass, and when Sinne comes in, she delightfully teases us with a brief bit of humming before singing. Her voice is gorgeous and strong and sexy. And with just the accompaniment of the bass, her voice has an intimate quality. And although intimate and sexy, she also allows herself to be playful here.

They follow that with the album’s original tune, “Taking It Slow,” which was written by Thomas Fonnesbaek and Helle Hansen. It begins, “Here we are once again/Fondly sharing stories of way back when/Recalling all that we were/We both feel forgotten emotions stir.” And after those lines, it is Thomas Fonnesbaek that offers a bit of playfulness on bass. And soon Sinne Eeg delves a bit into scat, but with a voice that is smooth and soars at times. It is when she dips into her lower registers that you’ll find yourself smiling, perhaps even laughing. There is a joy here in both her singing and Thomas’ playing, a joy that is contagious.

Even more playful and fun is their rendition of “Evil Man Blues,” written by Lionel Hampton and Leonard Feather, here the main line becoming “I’m an evil girl.” There is something sly in Sinne’s delivery. And when she sings, “I’m an evil girl, a real mean chick/If you don’t believe me, baby, I could change your mind real quick,” you can bet I believe her. And her following “Yeah, yeah, yeah” line soon leads to some scat, which is absolutely wonderful. And Thomas’ bass matches the playfulness, the two working so well together.

You can never go wrong with Gershwin, and on this CD, Sinne Eeg and Thomas Fonnesbaek tackle “Summertime.” This is a song that has been recorded by an incredible amount of artists over the years, including Billie Holiday, Big Mama Thornton, Janis Joplin, Sam Cooke, Ricky Nelson and The Zombies, and so, as you can guess, has been done many different ways. The version by Eeg and Fonnesbaek is one of the quicker-paced offerings of the tune, with the bass delivering a good groove. This version has a fairly happy sound, and includes some scat, as well as a nice bass solo. They then deliver a slow, gorgeous rendition of “Body And Soul,” which for me is one of the album’s highlights. It’s absolutely wonderful.

Also wonderful is their rendition of “Come Rain Or Come Shine” (here titled “Come Rain Or Shine”), which begins beautifully with Sinne Eeg delivering the first line a cappella. And I love the way she holds onto “me” in the line “’Cause I’m going to be true if you let me.” And the tone changes partway through, gaining more energy. This track also features a good bass solo. “Come Rain Or Come Shine” was written by Harold Arlen and Johnny Mercer. (By the way, Sinne sings the line as “Come rain or shine,” not “Come rain or come shine,” until near the end, that is.)

The album concludes with “Fellini’s Waltz,” which was written by Enrico Peiranunzi, with lyrics later added by Lorraine Feather. On Lorraine Feather's album Tales Of The Unusual, she titled this song “I Took Your Hand.” Here is a taste of the lyrics: “I was trembling badly, but I took your hand in mine/Though in all my life I never once believed in second sight/Something odd indeed but just as real came over me that night.”

CD Track List
Eeg – Fonnesbaek is scheduled to be released on September 15, 2015 on Stunt Records.
Posted by Michael Doherty at 10:46 PM