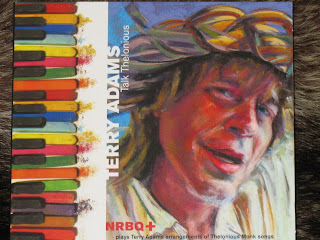 Terry Adams, pianist and founding member of NRBQ (New Rhythm And Blues Quartet), is releasing an album of his own arrangements of Thelonious Monk compositions titled Talk Thelonious. This is a live album (mostly), recorded at a show in Burlington, Vermont on April 5, 2012. Joining Terry Adams on this CD are fellow NRBQ members Scott Ligon, Pete Donnelly and Conrad Choucroun, as well as Jim Hoke, Klem Kimek and Pete Toigo. An album of Thelonious Monk tunes will probably not come as a surprise to fans of NRBQ, as that band has long incorporated jazz into its style and has been covering Monk for quite some time, contributing a track to the 1984 compilation That’s The Way I Feel Now: A Tribute To Thelonious Monk (actually, Terry Adams himself contributes a second track to that album: “In Walked Bud”). Here they play some of Monk’s most beloved tunes, including “Reflections,” “In Walked Bud” and “Straight, No Chaser.” This album could provide a nice entry point to Monk’s music for a lot of rock and rhythm and blues fans who might not have otherwise heard Monk’s music. And those who are fans of Thelonious Monk should appreciate the love and joy for the music that went into this recording, and will dig these different takes on the tunes.

Talk Thelonious opens with “Reflections” a song that was included on Sonny Rollins' 1957 record, Sonny Rollins, Vol. 2 (Thelonious Monk plays on that record) and Thelonious Alone In San Francisco. Here it is given a different feel, as Terry Adams plays pipe organ at the beginning (making me think of Thelonious Monk getting folks at the ball park ready for a baseball game). A little more than two minutes in, Adams switches to piano, and Pete Toigo and Conrad Choucroun come in on bass and drums respectively, at which point the composition is given something of a more traditional jazz feel. Then Terry switches back to pipe organ for the final minute or so of the track.

“Reflections” is followed by “Hornin’ In,” which is given some kind of fun honky tonk rhythm and blues vibe, with a bit of a New Orleans jazz flavor. The results are fantastic. Jim Hoke and Klem Klimek play alto saxophone on this track. Pete Donnelly is on bass.

One of my favorite tracks is “In Walked Bud,” and I am particularly fond of the bass, how it really drives the tune, and I love how Scott Ligon’s guitar dances lightly above it in sections, almost delicately at times. And Terry’s lead on piano is wonderful. This version is quite a bit shorter than the version Monk included on Misterioso. And then “Monk’s Mood” is quite pretty, opening with a piano solo by Terry Adams, and including some sweet work on harmonica by Jim Hoke. Jim also plays pedal steel on this track, obviously giving this rendition its own special feel. This is another of the CD’s highlights.

And once they get into “Children’s Song (That Old Man)” (here simply titled “That Old Man”), it has some sweet vibes. I love what Terry Adams does on piano, at times reminding me a bit of Vince Guaraldi. For those unfamiliar with this composition, it provides variations on the theme of “This Old Man” (you know, the children’s song that goes “This old man, he played one/He played knick-knack on my thumb/With a knick-knack paddywhack/Give the dog a bone/This old man came rolling home”), played by different instruments. This rendition begins with Jim Hoke playing that familiar theme on ocarina. Pete Toigo also delivers the theme on bass later in the song.

Terry Adams tackles the energetic early Monk tune “Humph,” and this rendition includes some good work on guitar by Scott Ligon, as well a groovy little drum solo near the end (though brief, this drum solo is still longer than that on the original Monk recording). And then I love what Terry Adams does with “Think Of One.” The whole band really nails this one, and I’m particularly into what Conrad Choucroun does on drums here. There’s a cool section of just drums and bass that is wonderful. And check out those saxophones! This is one my favorite tracks.

In the CD’s liner notes, Terry Adams recounts the time he requested that Thelonious Monk play “Gallop’s Gallop.” And here he delivers a really good rendition, which features Jim Hoke on alto saxophone. Terry Adams then gives  “Straight, No Chaser” a delightful, kind of silly country rock vibe, and it works really well. Jim Hoke plays pedal steel on this track, and Scott Ligon is on guitar. It's a lot of fun, and is another of my favorites. The album concludes with “Ruby, My Dear,” the only track here to have been recorded in the studio rather than live. On this one, the band is joined by Joe Jewett, Hilary Tanaka, Greg Diehl and Liz Rose on violins. Christine Mortensen and Jean Jeffries are on French horns, Kitty LeBlanc is on harp, and Norm DeMoura is on percussion. Jim Hoke adds a nice bit on harmonica. Hoke also plays flute on this track. Oddly, this track reminds me of the Beach Boys’ “Summer Means New Love,” particularly in the guitar.

CD Track List
Talk Thelonious is scheduled to be released on CD on November 27, 2015 through Clang! and also on vinyl through Euclid Records.
Posted by Michael Doherty at 3:57 PM