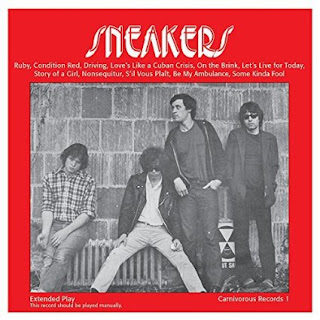 A couple of years before The dB’s formed, Chris Stamey and Will Rigby were in another band together, Sneakers, along with Rob Slater and Robert Keely, and in 1976 they released a 7-inch EP on Carnivorous Records. That record had six tracks on it, and featured Mitch Easter (before Let’s Active) on guitar. Then in 1978, Stamey and Easter released a 12-inch titled In The Red. And in 1992, Stamey and Easter got back together to release Racket, which combined remixed versions of songs from both of the earlier records, along with some new recordings. Then last year on Record Store Day (the second Record Store Day of the year, the one after Thanksgiving), an expanded 10-inch limited edition of that first record was released, with three bonus tracks, including a previously unreleased rendition of “Let’s Live For Today.” And now, finally, that first record has been released on CD through Omnivore Recordings. And it not only includes the bonus tracks from the Record Store Day release, but includes two more tracks – one from In The Red and one from Racket. Fans of The dB’s are going to love this CD. It is excellent pop, but with a certain raw garage feel to it, and most of the tracks were written by Chris Stamey. This special re-issue also includes liner notes by Scott Schinder.

The CD opens with “Ruby,” a fun bit of pop bliss with a little punk and some rock tossed in to give it more of an edge. (There is certainly a Kinks influence.) Plus, it has some interesting lyrics: “It’s funny, you don’t look like a character assassin” and “You find there’s more to hatred than physical attraction.” It’s followed by “Condition Red,” which has some delicious, forceful sections, as well as some sweeter pop vibes. “Driving” is one of my favorites. It has an unusual sound, and is full of surprises. Sure, it gets a bit messy at certain moments, but that is part of its charm for me. I love it when a band goes for something new and different, even if it’s not completely successful, and I think this track is largely a success anyway. Even a track like “On The Brink,” which mainly feels like a more straight-forward rock tune, has interesting moments and changes.

“Let’s Live For Today” is my favorite Grass Roots song, and recently I suffered through a version by someone calling himself Sir Ivan. But this rendition by Sneakers completely washes away any remaining muck left in my brain by Sir Ivan’s version. This is a really good version, with an earnest approach which I appreciate. In fact, the only bit of goofing is in the counting off the second time: rather than repeat “one, two, three, four,” they sing, “five, six, seven, eight.” This track was first included on the 2014 Record Store Day version of this album. The dB’s also included a cover of this song on the Ride The Wild TomTom album (I prefer this Sneakers version).

CD Track List
This special re-issue of Sneakers was released on September 25, 2015 through Omnivore Recordings. And for you fans of The dB's, Omnivore Recordings will also be re-issuing Christmas Time Again, with some different tracks.
Posted by Michael Doherty at 3:28 PM