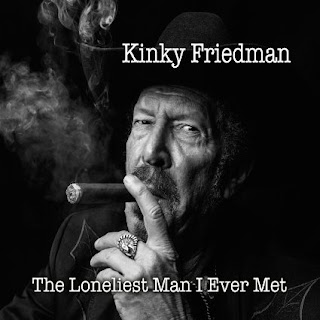 Recently I was at an unusual music venue called Kulak’s Woodshed, and I noticed on its shelves a hardcover book by Kinky Friedman. It was on its side on top of the other books, so perhaps someone had recently been reading it. I had never read any of his books, and the folks who were at the concert with me hadn’t either. But we got to talking a bit about his songwriting, and about a new studio album coming out, his first in many years, which got us very excited. Though he’s known for his songwriting, interestingly his new CD, The Loneliest Man I Ever Met, is mostly covers. Here he picks some excellent songs by folks like Willie Nelson, Warren Zevon, Merle Haggard, Johnny Cash and Bob Dylan. There are also a few Kinky Friedman originals.

Kinky kicks off the new album with a song I love, “Bloody Mary Morning.” It was written by Willie Nelson, who joins Kinky on vocals and guitar on this recording. This is a wonderful, loose, intimate acoustic rendition. Bobbie Nelson (Willie’s sister) is on piano, and Kevin Smith is on bass. It’s a great start to the album. Kinky follows that with a spoken word rendition of Tom Waits’ “Christmas Card From A Hooker In Minneapolis,” a song originally included on Waits’ 1978 release Blue Valentine. Like the original version, the vocals are accompanied by piano, but this version adds a gorgeous harmonica. Kinky changes the man’s name from Charlie to Kinky, of course, and the pace is a bit quicker, giving the song a slightly happier feel. There is a strange, romantic, nostalgic bent to this song, with lines like “Hey, Kinky, I think about you every time I pass a filling station.”

“The Loneliest Man I Ever Met,” the CD’s title track, is one of the album’s original compositions, co-written by Kinky Friedman and Will Hoover. The song is dedicated to Tompall Glaser, and at the beginning Kinky says, “Raise your glasses, one and all; drink a toast to the great Tompall.” This song was actually written years ago, but finally gets its first official recording here. And it’s one of my personal favorites from this CD. Here is a taste of the lyrics: “And though it was the happy hour, it wasn’t any fun/’Cause the party again was just a party of one.”

Another of my favorites is Kinky’s cover of Warren Zevon’s “My Shit’s Fucked Up.” The line “Your shit’s fucked up” is hilarious when put into the mouth of a doctor, as Warren Zevon does in this song.  This song was originally on one of Zevon’s final albums, and many of the songs he was writing at the time dealt in one way or another with death. “He said the shit that used to work, it won’t work now.” Kinky’s version certainly has a sense of humor, and also some wonderful work on harmonica. He follows that with a sweet love song, “Lady Yesterday,” a tune which was originally included on his 1976 album Lasso From El Paso. The age in his voice makes this new version even stronger, giving more poignancy to lines like “Could you make it spring” and “You danced like it was yesterday again.” By the way, in this version he changes the line “If I had the songs from David’s old guitar” to “If I had the songs from Willie’s old guitar.”

“Freedom To Stay” was written by Will Hoover (who co-wrote the CD’s title track). It’s an excellent song that has also been covered by Waylon Jennings and Tina Turner. Check out these lyrics: “I could ramble a thousand miles or more/Never find the light I’ve seen in your eyes before/You gave me the freedom to go my own way/No, but you gave me much more/I have the freedom to stay.” That is followed by “Wild Man From Borneo,” an original composition by Kinky Friedman which was included on Old Testaments & New Revelations, there with a full band. Here he is accompanied by acoustic guitar and harmonica. I prefer this new version. “I wonder if you’re happy/I wonder if you’re free/I wonder if you’ll ever know the mark you left on me.”

Another of my favorites is Kinky’s cover of “Wand’rin’ Star,” a song written by Alan J. Lerner and Frederick Loewe for the musical Paint Your Wagon. In the film version, Lee Marvin sings it, and actually had a huge hit with it in the UK. (I own the DVD and keep meaning to watch this film, but have not yet been able to bring myself to do it.) Kinky Friedman does a great job with it. He then concludes the CD with “A Nightingale Sang In Berkeley Square,” a romantic tune which was written by Eric Maschwitz and Manning Sherwin. It’s been recorded by a large number of artists over the years, including Frank Sinatra, Bobby Darin and Mel Tormé.

CD Track List
The Loneliest Man I Ever Met is scheduled to be released on October 2, 2015 through Avenue A Records and Thirty Tigers. (And now I'm curious enough to read some of his novels.)
Posted by Michael Doherty at 1:58 PM