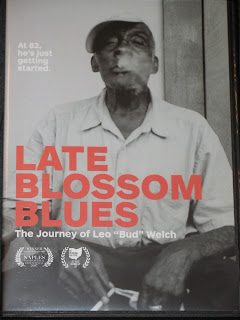 When I heard Leo Welch’s first CD release, Sabougla Voices, several years ago, I had the same questions most people had – Where had this guy been all that time? How did it happen that suddenly, at the age of 81, he released a CD? Where had he been performing? His story seemed perfect for a feature-length documentary film. And now we have that film. Late Blossom Blues: The Journey Of Leo “Bud” Welch tells the story of a man for whom music was an important part of life and who finally got to share his music with the rest of the world while in his eighties, proving that it is never too late to achieve one’s dreams. His is an uplifting and positive tale.

The film opens with footage of a soundcheck, all in close-ups – a drum head being tightened, a guitar tuned, a vocal microphone tested. And we hear Leo Welch say: “Well, that sounds good. That’ll work.” Indeed. And we’re taken to rural Mississippi, with shots of life in the area, before we see Leo Welch. Interestingly, the film shows him doing ordinary, routine things before we’re treated to any concert footage. We see Leo getting a coffee at a convenience store, his gait slow, his back somewhat bent.  He is, at times, difficult to understand, as when he’s talking to two men at that store, but the DVD includes different options of subtitles, including subtitles just for moments when the dialogue is hard to hear.

The documentary features an interview with Vencie Varnado, who worked as Leo Welch’s manager, and is basically responsible for Welch having a recording career. Interestingly, he had absolutely no experience in the music realm, but because of his passion for Leo Welch’s music, he made it a point to learn. His involvement is part of what makes this story so interesting. There are also interviews with club owners and people from Big Legal Mess Records, and with Dixie Street, who played drums with Leo. She talks about how she first began playing with him.

Leo Welch gives us some information about his early life, detailing some of the other jobs he’s had. And we’re introduced to Leo’s family, who tell some anecdotes about him. Leo does talk a bit about the church, and we are shown some cool footage of him singing in church. There is interesting material about the blues being the devil’s music, and how Leo Welch did both the lord’s music and the devil’s music, gospel and blues. The film gives us a good amount of footage of Leo Welch in action, both in the studio and on the concert stage. He seems like a tremendously sweet person. I particularly love that footage of him listening to his CD in the studio. His excitement is absolutely charming.

I like that the word “journey” is in the film’s title, because this documentary does take us on what seems like two connected journeys – that of a beloved resident in the regular life of Mississippi, and the journey of a touring musician who signs autographs and plays gigs in foreign countries. And it all feels so natural. Leo’s is an excellent story, and this documentary does a great job of getting it across. By the way, during the closing credits, there is some footage from 1985 of Leo Welch performing “Praise His Name,” which is apparently the earliest known footage of him.

The DVD has quite a lot of bonus material, including several deleted and extended scenes. Much of this footage is from the interview with Vencie, in which he talks about approaching Leo for the first time, and about the way Leo worked in the studio. “The studio was just like a venue for him,” he says. He also talks about Leo’s first gig after he began managing him, and interestingly he had no idea what Leo was going to do. There is also footage of Leo talking about his family, as well as Dixie Street talking about their best concert. The deleted and extended scenes total approximately twenty-one minutes.

There is also more performance footage, including Leo Welch at Bukka White Blues Festival, as well as at the recording studio and at his church. There is a bit of footage of Leo Welch jamming on his front porch with Leo Welch Jr. and John Kilgore. The performance footage is approximately twenty-eight minutes. And the DVD includes approximately a half hour of archival footage of Leo Welch, including Leo Welch & The Spiritual Airs performing in 1985, a portion of this footage being included in the closing credits. We also see Leo Welch performing a couple of songs on a television program in 1988, plus a brief interview, in which he talks about getting started playing the blues and about playing with BB King. There is also television footage from 1990 (in which the host – clearly not the brightest guy – says “brung his guitar” and “very unique”). The last of the archival footage is video footage from 1997 of Leo playing “Cadillac Baby.”

Late Blossom Blues: The Journey Of Leo “Bud” Welch was directed by Wolfgang Almer and Stefan Wolner, and is scheduled to be released on DVD on April 20, 2018.
Posted by Michael Doherty at 9:59 PM