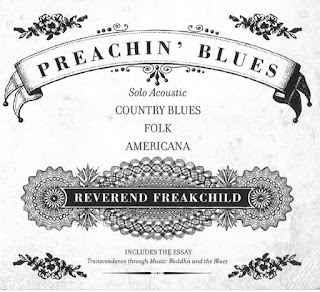 It’s not yet clear if one certain genre of music will emerge as the dominant one to get us through the coming horrors and embarrassments of a Donald Trump administration (typing that just made me queasy). But if one does, it may very well be the blues. And if God has abandoned us to our follies (and who could blame him if he did?), we still have the holy men of this plane to enlighten us and lift us up out of this political mire. Reverend Freakchild is here to preach the good word, and that word seems to be “perseverance.” On his new CD, Preachin’ Blues, he reminds us to enjoy our lives because death is constantly hanging about, ready to fuck up our day. This is a solo acoustic album, recorded live in a studio in Portland, Oregon, without any overdubs. It’s sort of like a concert presented for us in our living rooms (or wherever we listen to our CDs). As he would at a concert, Reverend Freakchild introduces the songs, even saying at one point, “But it’s great to be here in Portland, thank you all so much for having me.” The stage banter is presented as separate tracks, so you can take it or not, depending on your mood. Each of those tracks is given a title, and all of them begin with the word “Preachin’.” “Preachin’ Blues,” the title track, is the one song that begins with that word, and is a really cool rendition of the Eddie “Son” House, Jr. tune.

Reverend Freakchild opens this new CD with a great instrumental number, “Holy Breathing Blues,” a raw and loose original tune that he plays on guitar and harmonica. It’s pretty short, and seems designed to get him warmed up, get things off to the right start. I love that song title. He then does the famous Blind Lemon Johnson song “See That My Grave Is Kept Clean,” delivering a good rendition, with something of a solemn spiritual air to it, combined with an energy firmly rooted in the dust and dirt of our world. And in introducing “In My Time Of Dyin’,” he says: “Like my mama said, Death is part of life, you know. The point is to have a good life before you die.” Yes. He then seems to touch upon the sense that more people than usual have been dying lately. “But it seems like there’s a lot of people going on before their time.” The song is then offered as help to those passing on to whatever existence is next.

And speaking of people who have gone on before their time, Reverend Freakchild does a cool, bluesy rendition of Prince’s “Kiss.” I just saw Ellis Paul play this one in concert (during his New Year’s Eve shows at Club Passim), so it’s being given different treatments these days, which seem to work quite well. These two renditions are making me take a fresh look at this song, and giving me more appreciation for it. In the song’s introduction, he talks about his chosen name and whether he’s a legitimate reverend, and calls the song a “purple song.”

“All I Got Is Now” is clearly one of his favorites of his own material. In his previous release, Illogical Optimism, a three-disc set, the second disc contains nothing but variations of this song, twelve in all. And before that, it was the lead-off track to Hillbilly Zen-Punk Blues. So you’d think by now he would have played every possible version and maybe be tired of it. But no, here he gives us a new blues rendition. It’s a song about how it’s difficult to live in the moment, to let go of yesterdays and to not try to figure out the tomorrows. I try sometimes myself, but it feels damn near impossible. My thoughts naturally go to both events from the recent past and worries and concerns of the near future.

In introducing “It’s Gonna Be Alright,” Reverend Freakchild says, “This is a tune to help you enjoy your time on Planet Earth here, man.” He also quotes Shakespeare: “Like Shakespeare says, you know, things are not good or bad, it’s thinking that makes them so.”  The actual line is, “Why then, ‘tis none to you; for there is nothing either good or bad, but thinking makes it so,” a line I’ve always strongly believed to be true. That’s from Hamlet, by the way, which is probably the single greatest work of art that the human race has created. Hamlet speaks the line to Rosencrantz in Act II. Reverend Freakchild offers a playful, totally enjoyable rendition of this song. All of these tracks were recorded in July of 2016, except for the final track, “Grinnin’ In Your Face,” which was recorded in concert in 2013.

CD Track List
Preachin’ Blues was released on January 1, 2017. By the way, if you put this disc into your computer, you can read an essay titled “Transcendence Through Music: Buddha And The Blues,” in which Reverend Freakchild writes, “Music, especially the Blues, because it is rooted in suffering, provides a powerful path to transcendence” (p. 5). Well, okay then. And regarding the concept of the character named Reverend Freakchild, he writes, “I am constantly questioning the identity of this character and thus myself” (p. 29). I think we’ll all be questioning ourselves soon, perhaps retreating into ourselves and into these personal questions rather than confronting the horrible reality out there. But who knows? And who knows what wonders might come from such exploration?
Posted by Michael Doherty at 5:01 PM