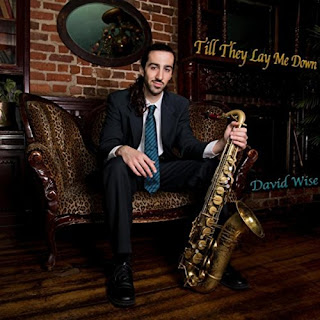 David Wise is a saxophonist from Richmond, Virginia who is now based in Los Angeles. Though he has appeared on recordings since 2007, Till They Lay Me Down is his first solo album. It features mostly original compositions, written or co-written by Wise, with just a couple of covers. Joining him on this release are Bruce Forman on guitar, Alex Frank on bass and Jake Reed on drums, along with a few guest musicians on certain tracks. There are also vocals on a couple of tracks.

The CD opens with one of the vocal tracks, “What More Could One Man Want?” This was written by David Wise, though it has a wonderfully familiar vibe and sound, and I’m surprised I hadn’t heard it before. It just has that feel of being a song that’s already made a home for itself in my life. You know? Jason Joseph provides the lead vocals on this track, with Laura Mace backing him. Here is a taste of the lyrics: “If you’re by my side/Then even that would be much more than I deserved/What more could one man want?” Ah, I’m happy to say I know just how he feels. This song also features some nice work on keys by Amy K. Bormet. Josh Smith joins the group on guitar, playing that great solo partway through, and this track also features Mitchell Cooper on trumpet, Glenn Morrissette on alto sax and R.W. Enoch on tenor sax. I would not be surprised if this song became a standard in the years to come.

“Sylvia” then follows with some sweet, romantic tones on saxophone. This track also features Mikala Schmitz on cello, an instrument I’m always happy to hear. This is a beautiful piece, with something of a 1940s feel, and I really like the percussion. David Wise then plays one of the album’s covers, a rendition of “Here’s That Rainy Day,” written by Jimmy Van Heusen and Johnny Burke. It’s a song that’s been covered by a wide range of artists over the years, and here David Wise gives it his own personal spin. It has a kind of peppy romantic feel, and features a very cool bass line by Alex Frank (there is even a bass solo in the second half of the song), and some great work by Bruce Forman on guitar. And to top it off, there is a groovy drum solo by Jake Reed. This version should have you feeling good. The album’s other cover is “Kol Nidre,” a traditional piece for Yom Kippur, the Day of Atonement. It’s presented as a solo on saxophone.

“Till They Lay Me Down,” the album’s title track, is probably my favorite. This one makes me feel seriously damn good, even in the days before the inauguration of that horrid creature (I keep trying to put that out of my mind, but keep failing). There is even a cool bass solo. But it’s David Wise’s smooth, intimate, expressive and groovy sax that is at the heart of this piece and makes it something special. Somehow this tune is giving me hope (though perhaps this bottle of Italian wine is also contributing to that feeling). That is followed by a track titled “Lullaby,” and it does feel like a gentle late-night piece, letting us know the world is okay, that it’s safe to go to sleep, that the world will still be here in the morning.

The CD then concludes with two tracks featuring vocals, “Life Is But A Song, Parts 1 & 2” and “Life Is But A Song, Part 3.” David Wise himself provides the vocals for these two tracks, though the lyrics for the first track were co-written by Amy K. Bormet. Mikala Schmitz joins the group on cello for that first one. The second track has a cheerful vibe, and features Mitchell Cooper on trumpet. “So happy I have you in my life/So thankful to have you in my heart.” Yes, it’s a happy, slightly cheesy song, but I’m in touch with this. And for all of us who have a special someone, it’s good to regularly remind him or her just how you feel. If you don’t feel like saying it, for whatever reason, then play your loved one this song.

CD Track List
Till They Lay Me Down was released on January 6, 2017.
Posted by Michael Doherty at 6:32 PM