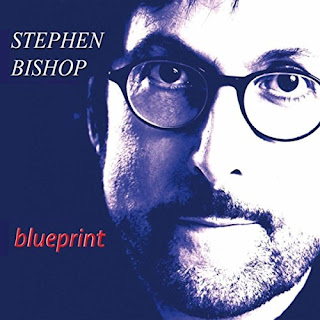 Stephen Bishop is known for mellow hits like “On And On” “Save It For A Rainy Day” and “It Might Be You.” He also did that ridiculously fun and catchy theme to Animal House, a movie that he also appeared in (though it’s a funny moment, I always hate to see a guitar smashed like that). He did “Dream Girl” from that same film, as well as the theme from the 1984 remake of Unfaithfully Yours (a movie I love particularly because Nastassja Kinski is insanely gorgeous in it). Most of these are songs that he wrote, and many artists (including David Crosby and Art Garfunkel) have covered his material over the years. He’s co-written songs with Kenny Loggins and Eric Clapton, and on his newest release, Blueprint, he delivers his version of “Holy Mother,” the song he wrote with Clapton and which is on Clapton’s August album. Blueprint contains some romantic, unabashed love songs like “Someone Like You,” and also features some striking lyrics.

Though this disc contains mostly original material, Stephen Bishop opens it with a cover of “Everyone’s Gone To The Moon,” which was written by Kenneth King (also known as Jonathan King). This version has an odd beginning, with the song gently emerging from a dark cloud. “Eyes full of sorrow, never wet/Hands full of money, all in debt/Sun coming out in the middle of June/Everyone’s gone to the moon.” Ah, I know the feeling, especially these days. And in the coming four years, the moon might be the safest and sanest place to be. I really like this rendition. It’s kind of quiet and pretty, and it sneaks up on you.

He follows that with an original song titled, “Little Bird,” written with Dominique Star. This is one of my favorites, in part because of lines like “The signs were there all along/But it takes all the strength I have just to be yours/I never made you happy, did I?” And there is something pleasant about its groove, about its vibe. “Ultralove” he wrote with Jeff Jones. And yes, as you might guess from its title, it’s kind of cheesy, and definitely has a strong 1970s vibe. But that’s not necessarily a negative thing. “Time goes by so slowly when you’re gone/So I tell my heart that soon you’ll be here in my arms.”

“And I Love You” is sweet and simple, delivering a beautiful late-night promise that you just know he’ll keep, because this night will go on and on, without need of a dawn. “And I will follow you anywhere.”  Then “I’ll Sleep On The Plane” has a very different vibe, with a kind of jazzy sensibility and a sense of humor, making it one of the album’s most interesting songs. Plus, it tells a good story, and features some lines that stood out for me, like “Posing for Playboy as she reads Voltaire” and “It’s gonna be a brand new life for us, my love/You’ll wear your white fake fur in the Vatican hall.” And I love the backing vocals.

The lines from “Before Nightfall” that stand out for me are “When you’re tearing yourself apart/When you’ve broken your own heart/I’ll help you mend it.” Every time I listen to this disc, those lines grab me. This one too has a sweet vibe. “Holy Mother” is a song that Stephen Bishop co-wrote with Eric Clapton. Clapton included it on his 1986 album August, and now we get Bishop’s rendition. It’s beautiful and moving. “Oh, I need your help this time/To get me get through this lonely night/Tell me please which way to turn/To find myself again.”

“Slippin’ Into Love” comes as a surprise, for suddenly we have a pronounced beat and a more electronic 1980s pop feel. It’s kind of a dance song, but a somewhat mellow one. This CD concludes with a new rendition of “It Might Be You” (which is listed as a bonus track). This song was a hit for Stephen Bishop in the 1980s, when it was featured in the movie Tootsie. Hearing it now really brings me back to my childhood. It certainly got a lot of airplay in 1983, and it holds up remarkably well. A nice way to end the album.