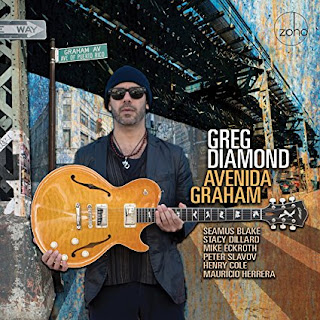 These are rough times, no doubt about it. And as we get closer and closer to the day the monster assumes office (he’s even provided a countdown to disaster on his Facebook page), I’m finding it more and more difficult to find solace, even within myself. Even retreating into music is becoming difficult, though I keep trying. Today I’ve been enjoying Avenida Graham, the latest release from jazz guitarist Greg Diamond. Greg Diamond is based in New York, and lived for a decade near the corner of Graham Ave. and Broadway, the spot depicted on the CD’s cover. His music is influenced by the different cultures and peoples of that city, often with a strong Latin feel (which you might have guessed by some of the track titles). Joining him on this disc are Stacy Dillard on saxophone, Seamus Blake on saxophone, Mike Eckroth on piano, Peter Slavov on bass, Henry Cole on drums, and Mauricio Herrera on percussion. These tracks were recorded in New York in May of 2015.

“Synesthesia,” the opening track, has a great groove, and some excellent work on guitar. But what really makes me love this track is that saxophone, sometimes sounding like something coming in from a distant, foreign land, entering from above, from below, from all sides, commenting on the action and then quickly becoming a part of it. That’s Stacy Dillard on saxophone. I also love the percussion, which dominates the track at the end, taking it in a different direction. Actually, the first time I played this CD, I thought that ending was actually the beginning of the second track. Henry Cole does some great work on drums here.

Then things get mellower with “Rastros,” which has a quiet, gentle feel to start. Then the tune begins rising above that initial feel, like finding strength in crying out loud to the night, and this time it is Seamus Blake who provides that voice on saxophone. I just want to ride the waves of that sax, right on through the darkest of days. Greg Diamond’s lead part on guitar toward the end is wonderful, and I particularly like the way it rises over that great percussion and piano. And then the sax joins its voice to that of the guitar, like everything coming together in a beautiful and lasting way. “Hint Of Jasmin” also begins in a mellow way, with some really nice solo work on guitar. This compassionate piece draws me in, feeling like a caress within a cold city.

“Laia” begins with a cool bass solo, and goes in some interesting directions. I love that gentle saxophone over the guitar and percussion early on, like a breeze washing over my face and rustling the leaves of the nearby trees, while I keep my eyes closed. Things then take a turn when the piano takes on a steady groove, and soon the track gets a bit wild, the saxophone rising in energy and freedom of expression. And check out the way the guitar and percussion interact toward the end. Wonderful stuff. That’s followed by a moving and beautiful piece titled “Ultima Palabra,” featuring Mike Eckroth on piano at the beginning and then again in a lead section halfway through that is excellent. Peter Slavov turns in a wonderful lead on bass in the second half of the song. But Greg Diamond’s work on guitar here is the heart of the piece, and is what makes this track one of my favorites.

Greg Diamond concludes the CD with “Motion Suite,” which at times is a more joyful piece, with the vibe of a busy optimism. I love that piano. Ah, maybe we just need to keep moving. Don’t provide an easy target, right? And don’t let despair overtake you on January 20th.