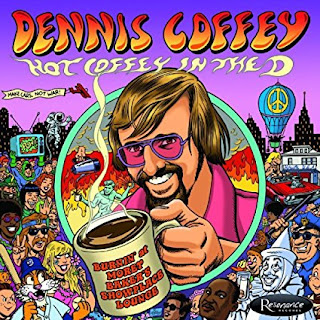 Dennis Coffey is a guitarist known for his work in Detroit on funk and soul recordings, heard on Motown albums by The Temptations and The Supremes, among others. You might recognize him from the documentary film Standing In The Shadows Of Motown. He is also known for his own solo career, including the groovy instrumental hit “Scorpio.”  His new album, Hot Coffey In The D: Burnin’ At Morey Baker’s Showplace Lounge, is a live recording from 1968 which was previously unreleased. On this one, he plays in a trio with Lyman Woodard on organ and Melvin Davis on drums. They had a regular gig at that Detroit venue, combining jazz, rock, funk and soul, and on this recording they play to a fairly attentive crowd. They do a couple of original numbers, credited to all three musicians, and covers of material by folks like Jimmy Webb and Burt Bacharach. This release contains a 56-page booklet, with notes by Zev Feldman and Kevin L. Goins, as well as interviews with Dennis Coffey, Mike Theodore and Melvin Davis, all conducted by Kevin Goins. There are also interviews with Bettye LaVette and Clarence Avant, as well as some photos.

Hot Coffey In The D: Burnin’ At Morey Baker’s Showplace Lounge opens with an original tune titled “Fuzz.” And yes, there is certainly a distinctive fuzz in the sound of the guitar here, and the track has a great late-1960s jam vibe. In the liner notes to this release, it’s mentioned more than once that the audience would sit and listen to the music, and that that was appreciated by the musicians, but I don’t think I would have been able to stay in my seat during this jam. Nope, I would have found a spot to dance. They follow that with a groovy, somewhat loose, jazzy rendition of Jimmy Webb’s “By The Time I Get To Phoenix,” featuring some cool work on organ. This is quite a bit different from most versions of this song that I’ve heard over the years.

The trio also does a very cool cover of “The Look Of Love,” that familiar song written by Burt Bacharach and Hal David, which at the time of this recording was still a relatively new song (though it had already been covered by several artists). It was featured in the 1967 film Casino Royale, in which it was presented both as an instrumental and a vocal number with Dusty Springfield singing the lyrics. This rendition by Dennis Coffey becomes a really good jam, with Dennis and Lyman totally going for it. At nearly twelve minutes, this is the longest track of the disc. The trio goes from Burt Bacharach to Herbie Hancock, with a cover of “Maiden Voyage,” and for this one they stick fairly close to the original.

One of my favorite tracks is “The Big D,” a great bluesy rock number written by Coffey, Davis and Woodard. This is another that would have had me dancing at the venue, and features some delicious work on guitar. When I was in high school I worked at a grocery store called The Big D, but it wasn’t nearly as cool as this tune. Perhaps if they had pumped in some Dennis Coffey music, the store would have thrived, and I could have danced while bagging groceries. Oh well, a missed opportunity. That’s followed by another of the disc’s highlights, “Casanova (Your Playing Days Are Over),” a song written by Jo Armstead and Milton Middlebrook, and originally recorded by Ruby Andrews. This version by Dennis Coffey is excellent, taking it to heights not realized in the original. I love what he does on guitar.

The CD then concludes with a somewhat funky rendition of the traditional spiritual “Wade In The Water,” another highlight featuring more great work on guitar. And then check out that energy on the organ. This track even includes a drum solo, which I appreciate.

CD Track List
Hot Coffey In The D: Burnin’ At Morey Baker’s Showplace Lounge is scheduled to be released on CD on January 13, 2017 on Resonance Records. It was released on vinyl on Black Friday in 2016 as one of the special Record Store Day limited edition items (only 1,500 were available). By the way, Bill Morrison did the album cover artwork.
Posted by Michael Doherty at 1:47 PM