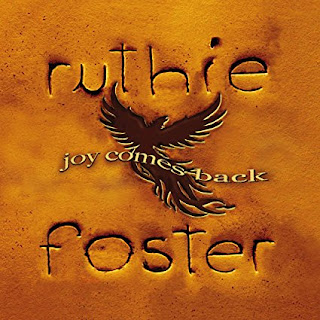 As the world continues to break from its axis under the extreme weight of Donald Trump’s ego, and a blond screeching pet lizard named Kellyanne Conway insists on the veracity of his twisted delusions, denying reality loudly and repeatedly, it’s difficult to keep from questioning one’s own sanity. It’s impossible to reconcile what they insist is truth with what we know to be true, and some people simply snap under the pressure to accept these fiends’ fantasy as fact. The only thing I’ve found that I can count on to keep us somewhat grounded while also lifting our spirits is music. Fortunately, there is a lot of great music out there to keep us going, to remind us of what’s important and what’s real. Music to scare off the monsters and unite those of us who haven’t succumbed to the lunacy they churn out from their lofty lair. One new album that should do the trick is Ruthie Foster’s Joy Comes Back.

On this CD, Ruthie Foster covers a wide range of material, providing only one original track (unlike 2014’s Promise Of A Brand New Day, which included quite a lot of original material). But Ruthie Foster has proved that she can take others’ songs and sing the hell out of them, making them her own. Just listen to her incredible rendition of “If I Had A Hammer” from her 2012 release Let It Burn, and you’ll know exactly what I’m talking about. On this album, she delivers an even more surprising cover, but more on that in a bit. First, what an optimistic title for this talented artist’s new album: Joy Comes Back. It seems damn unlikely, with the nation run by a mendacious narcissist without a shred of humanity. But hell, let’s make it true, folks, no matter how difficult it might seem at the moment. Let’s bring back some joy. On an individual level, listening to this album will be a step in that direction.

She opens the album with a great, soulful rendition of Chris Stapleton’s “What Are You Listening To?” There is still that country heart to this song, but Ruthie’s version has a more intimate feel than the original. By the way, Ruthie Foster is backed by some excellent musicians on this CD. On this track, Joe Vitale (who played with Crosby, Stills And Nash) is on drums, and Larry Fulcher is on bass. Ruthie follows “What Are You Listening To?” with “Working Woman,” written by Grace Pettis. It’s a celebration of women, and a reminder of what women are capable of, a perfect song coming on the heels of the Women’s Marches. Ruthie sings, “This country’s run by the working woman/Don’t be fooled – she ain’t no pretty face/She rules this roost, she runs this place.” Ah, if only a woman were running our nation. Songwriter Grace Pettis plays acoustic guitar on this track. And Frank LoCrasto provides some nice work on keys. Ruthie Foster also covers Grace Pettis’ “Good Sailor,” a song Pettis co-wrote with Haley Cole. And again Grace plays acoustic guitar, and also provides some backing vocals. The lines I love from this song are, “Easy living never did me no favors/Smooth seas never made a good sailor/So bring on, bring on the crashing waves.”

The one track on this album written by Ruthie Foster is “Open Sky,” a moving song with a slow modern R&B groove. Here is a taste of the lyrics: “Lately I don’t have a clue/Where I want to go/But I know one thing’s for sure/It’s you I want to know.” The incredibly accomplished Willie Weeks provides a cool bass line on this track.

As I mentioned earlier, this CD contains a seriously fantastic and surprising cover. And that is “War Pigs,” the opening track from Black Sabbath’s Paranoid. And just as her unusual cover of “If I Had A Hammer” was one of the best tracks of Let It Burn, her Black Sabbath cover is one of the best of this new album. Ruthie Foster plays dobro on this track, and Simon Wallace provides some great work on harmonica. But it is Ruthie’s vocal performance here that is really stunning, and makes this track something worthy of admiration. You should definitely check it out. That’s followed by a really good cover of The Four Tops’ “Loving You Is Sweeter Than Ever,” a song written by Ivy Jo Hunter and Stevie Wonder.

Another of my favorite tracks is Ruthie’s playful and joyful cover of Mississippi John Hurt’s “Richland Woman Blues,” on which Warren Hood plays both fiddle and mandolin. Ruthie plays dobro on this one. Mark Epstein is on upright bass. That’s followed by a cool and passionate rendition of Shawnee Kilgore’s “Abraham,” a song about Abraham Lincoln. “When I do good, I feel good/When I do bad, I feel bad/That’s my religion.” The album then concludes with Deb Talan’s “Forgiven,” with Brian Standefer on cello, Kim Deschamps on pedal steel, Frank LoCrasto on keys, Eric Holden on bass, Daniel Barret on percussion and Joe Vitale on drums. It has a somewhat different feel from Deb Talan’s original acoustic guitar version, but the heart of the piece remains the same. “You are forgiven/I open all my doors/You are forgiven/It’s what a heart is for.”

CD Track List
Joy Comes Back is scheduled to be released on March 24, 2017 on Blue Corn Music.
Posted by Michael Doherty at 12:36 AM