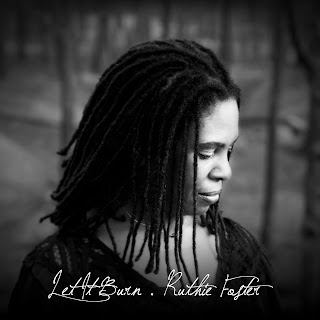 Let me just say this about Ruthie Foster: This woman can sing. She has power, heart, and an earnestness that is seriously sexy. It's no surprise to learn that she was named Best Female Vocalist at the Austin Music Awards in 2008.

Most of the songs on her new album, Let It Burn, have a good groove, and some of them, like "Everlasting Light," feel pretty loose, which is nice. Let It Burn features a good mix of original material and covers - and Ruthie has a distinct way of making those covers her own. I was surprised by what she did with "Ring Of Fire," for example, and completely blown away by what she did with "If I Had A Hammer." Even her more straightforward renditions boast her signature - songs like "It Makes No Difference" and "Long Time Gone." And of course it doesn't hurt that she has an excellent band backing her. As of this writing, Ruthie Foster is on tour, and after hearing this CD, I am really looking forward to seeing her in concert.

Let It Burn opens with "Welcome Home," a gospel-flavored song written by Ruthie Foster. The first thing that hits you are these glorious vocals - Ruthie's, as well as the backing vocals by The Blind Boys Of Alabama. The first lines are "When my mind didn't know how to get there/I trusted my heart and I swear my soul came to welcome me home." Those lines are repeated several times. This is one of those songs whose lyrical repetitions serve it well, pulling you farther in, hitting you harder each time. You get the feeling she could tell an entire story with one repeated line. This song seems over too soon.

Another song that features The Blind Boys Of Alabama is "Lord Remember Me," also written by Ruthie Foster. And this is amazing gospel. The first minute or so is a pure vocal performance, done unaccompanied - no other instrument is needed. But when the band does kick in, the song takes on another layer of intense beauty. I love this song. It's almost enough to make me a believer.

"Set Fire To The Rain"

Ruthie Foster's vocals on "Set Fire To The Rain" remind me at times of Tina Turner. She has that power, a voice whose great raw honesty burns in each note. She sings, "I feel you here forever/You and me together, nothing gets better/'Cause there's a side to you that I never knew, never knew/All the things you'd say that were never true, never true/All the games you played you would always win." There is an instrumental section toward the end of the song where the music feels so simple, yet retains an intensity - it has an insistent, steady bass line which makes you feel like something is going to explode at any minute.

"Set Fire To The Rain" was written by Adele Adkins and Fraser T. Smith, and was originally released on Adele's second album, last year's 21.

Ruthie Foster's rendition of the Los Lobos song "This Time" has a bluesy groove, and some nice work by Ike Stubblefield on keys. This is a good rendition, and is stretched out a bit, clocking in at more than a minute longer than the original Los Lobos version. "This Time" was written by David Hidalgo and Louie Perez, and was the title track from the band's 1999 release.

"You Don't Miss Your Water"

"You Don't Miss Your Water" is a slow blues tune, here performed as a duet with William Bell, who wrote the song. It features a great sax solo by James Rivers that really makes me love this rendition. Just so cool. And the fade-out is fantastic, with some more nice work on sax over some bass and cymbals. Seriously, how often is the fade-out of a song impressive?

William Bell's original version of this song was released in 1961 on Stax. It was his debut single.

Ruthie Foster does a strange, interesting, slow, bluesy take on "Ring Of Fire," the song written by June Carter and Merle Kilgore, and made famous by Johnny Cash. It takes a moment to get used to, to put all other renditions (and there are a lot of them) out of your head. But once you do, you'll enjoy sinking into this slow, thoughtful version.

"It Makes No Difference"

"It Makes No Difference" is one of my absolute favorite tunes by The Band. It's so beautifully sad. This rendition is driven mainly by Ruthie's vocals, and also by the organ. Her vocal performance feels more intimate than the original. "It Makes No Difference" was written by Robbie Robertson, and was included on The Band's 1975 release, Northern Lights - Southern Cross.

Ruthie Foster includes a cover of the Crosby, Stills & Nash song "Long Time Gone," written by David Crosby. It takes a moment to get used to the more prominent drum beat and the loose, almost funky feel to the bass. Ruthie's voice does have the emotional power needed for this song. And the music is allowed to get loud and intense, which is also needed for this one to work. It's actually a good version of the song. And what really makes this rendition work is the presence of The Blind Boys Of Alabama.

The original version of this song was included on the self-titled debut record by Crosby, Stills & Nash.

A slow, low-down, dirty, sexy version of "If I Had A Hammer"? Yes! And shockingly, it works. I'm not kidding. You have to hear it to believe it. It's like the "Death Don't Have No Mercy" version of "If I Had A Hammer," and it's bloody brilliant. Ruthie really goes all out on this one, giving a seriously impressive vocal performance. And then there is some sparse sax at just the right moments.

"If I Had A Hammer" was written by Pete Seeger and Lee Hayes, and most famously done by Peter, Paul & Mary. Ruthie's version is absolutely nothing like that well known version. Enjoy.

The album ends with another gorgeous gospel song, "The Titanic," again with The Blind Boys Of Alabama. This one is done completely acappella. And again, it's almost enough to make me a believer.

The musicians on this album are Ruthie Foster on vocals, Ike Stubblefield on Hammond B3 and piano, George Porter Jr. on bass, Russell Batiste on drums, Dave Easley on guitar, and James Rivers on saxophone. The Blind Boys Of Alabama perform on "Welcome Home," "Lord Remember Me," "Long Time Gone" and "The Titanic." William Bell performs on "You Don't Miss Your Water."

Let It Burn is scheduled to be released on January 31, 2012 through Blue Corn Music.
Posted by Michael Doherty at 4:33 PM