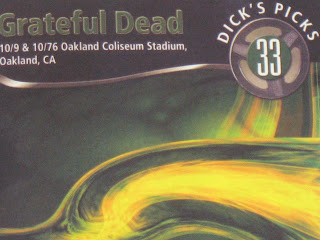 The Grateful Dead took basically all of 1975 and the first half of 1976 off from touring. But when they came back, they came back in full force, with a renewed vigor and focus. As this collection of music shows. This four-disc set includes two complete concerts - from October 9th and October 10th, 1976, at the Oakland Coliseum Stadium in Oakland, California.

The first disc opens with the band saying "Good morning" to the crowd. The Grateful Dead actually went on at 11 a.m. These shows were known as "Days On The Green," a series of concerts presented by Bill Graham. The band starts with the Chuck Berry rock and roll tune "Promised Land," a great energetic opener.

I like a lot of what Keith Godchaux does on keys during the jam of "Mississippi Half-Step Uptown Toodeloo." But it's the end of this song that really does it for me - the great power in the vocals on the "across the lazy river" section.

"Cassidy" is one of my favorite Grateful Dead tunes. This version features some interesting stuff on drums - different from most versions - it makes this rendition feel faster than usual. And then check out Jerry's guitar toward the end.

Before "Looks Like Rain," Bob says, "I want to thank the Oakland A's for making this afternoon possible...by losing." (The Oakland A's finished in second place in the American League West, so it was the first time in six years that they didn't make it to the playoffs.)

It's so odd to hear "Scarlet Begonias" on its own, without its being paired with "Fire On The Mountain" or "Sugar Magnolia" - and in the first set! This is a great rendition. I've always loved this song. And though it doesn't lead into "Fire On The Mountain" (that was still several months away), this version features a nice long jam. They do some seriously interesting stuff here. This is absolutely a highlight of the first disc.

"Lazy Lightnin'" and "Supplication" were fairly new at the time of this show, being first played by the Dead in June of that year. These songs were first released on the self-titled debut record from Kingfish, a band Bob Weir joined during the Dead's hiatus. I always liked the intensity of "Lazy Lightnin'," particularly in the chorus.

The first disc concludes with a wonderful rendition of "Sugaree."

This is a crazy, delicious, rockin' second set. Oddly, there is not a single slow song - no "Stella Blue" or "Ship Of Fools" near the end to calm folks a bit. Maybe that's due to time constraints (at the beginning of the set - after a bit of the theme to Alfred Hitchcock Presents - Bob jokes, "You know, Uncle Bill says we only got an hour from when we start playing, so we're not going to start playing for a little bit"). The second set (not including the encore) is only 65 minutes. After this set, The Who were scheduled to take the stage.

But though short, this is a fantastic set of music. Everything goes right in this second set.

From the first note of "St. Stephen," the audience goes wild. This song was re-introduced into set lists in June of 1976, after a five-year absence. Is there a better way to start the second set? It's a sweet version, though short. After the line, "One man gathers what another man spills," the band goes into a fantastic version of "Not Fade Away." And then the band finishes "St. Stephen." It's really happening for the band this day, flowing so easily from "Not Fade Away" back into "St. Stephen."

And things get even more interesting after that. The band does "Help-Slip-Frank" from 1975's Blues For Allah. At this point they still sing "Diga" during "Help On The Way." But what's really wild is that they break up the trio of tunes by inserting a drum solo and "Samson And Delilah" into the middle of "Slipknot!" Weird and wonderful. This is a great version of "Slipknot!" by the way. And dig Bob's vocal delivery in "Samson And Delilah."

The encore is "U.S. Blues," which is fun despite some trouble with the lyrics.

The Grateful Dead open the second show with "Might As Well," a fun rock tune from the Garcia solo album Reflections (1976). The Dead first played this song in June of 1976, so it was still fairly new at the time of this recording. This version has good energy, though is perhaps a bit messy.

Bob Weir dedicates "Mama Tried" to the equipment crew. This is a good, rousing rendition. And this version stands alone; it doesn't go into "Big River" or "Mexicali Blues," as would generally be the case later.

I love Jerry Garcia's vocals toward the end of this version of "Ramble On Rose," when he sings, "Goodbye Mama and Papa/Goodbye Jack and Jill/The grass ain't greener, the wine ain't sweeter/Either side of the hill." There is great joy as well as great force in his voice. That song always builds so well.

Bob Weir picks a few of the same songs the band played the day before - "Cassidy," "Promised Land," "Samson And Delilah." But no matter, I never tired of "Cassidy." It's one of the band's best songs. I love John Barlow's lyrics, and when I met him it was one of the songs we talked about. It turns out to be one of his favorites too. "Let your life proceed by its own design."

They play a nice, slow, sweet "Friend Of The Devil," with a really pretty, extended jam.

And then the band goes into the revamped, 1970s-style "Dancing In The Streets," which would be included on the following year's studio release, Terrapin Station. And this is when the band really lets go, stretching out in a groovy jam that goes off into some wonderful territory, eventually leading into "Wharf Rat," one of Jerry Garcia's most powerful songs. And that moment after "live the life I should" is particularly intense in this version, leading to a beautiful "I'll get up and fly away."

The only awkward moment is Bob Weir coming in again with "Dancing In The Streets" when Jerry was still finding more places to go in "Wharf Rat." A very awkward transition. But once everyone's on board, it's a fun reprise of the tune to end the first set.

At the start of the second set, Bob Weir leads the crowd in saying "Thank you, Uncle Bill" to Bill Graham for putting the concert together.

This disc contains a high-energy rendition of "Playing In The Band." It gets right into a groovy jam, that at first is heavy on bass, before Jerry's guitar finds those high notes. Something about Jerry's guitar feels like swimming through an electric sea filled with gorgeous creatures that brush against your skin but don't hold you back or push you on. This is what the Dead are all about. When they're on, their music really does transport you. It's these magic moments that kept folks coming back for more.

"Playing" leads into a short drum solo, which then goes into one of those gorgeous slightly slower mid-1970s versons of "The Wheel." And it's the jam out of "Wheel" when the band starts to get Weird. Wonderfully Weird. Then into another short drum solo, which leads to Phil's heavy bass lead-in to "The Other One."

And man, this version of "The Other One" comes on strong and fast. Like a monster bursting from its cage, then looking around to see who it will devour first. And it doesn't let up. What a great version. And around 4:20 to 4:30, listen to that little guitar bit, like a cat or something commenting at the end of a line.

And that leads into the beautiful "Stella Blue." This is one of my favorite songs, and this version is phenomenal. Put it on and close your eyes. "All this life was just a dream."