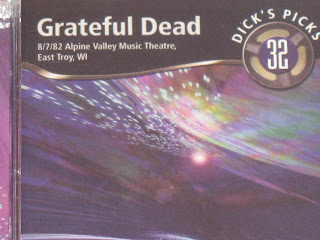 While most of the Grateful Dead live recordings have understandably focused on the band's 1970s shows, it's great to hear some music from the 1980s. And 1982 in particular was an interesting year for the Dead. That was the year they introduced some of the material that would eventually find its way onto their 1987 studio release, In The Dark, including "West L.A. Fadeaway," "Touch Of Grey" and "Throwing Stones." And at the time of this concert, Jerry Garcia had just turned 40. This two-disc set contains the complete show the Grateful Dead performed on August 7, 1982 at Alpine Valley Music Theatre, in East Troy, Wisconsin. (The encore is moved to the end of the first disc, because it wouldn't fit at the end of the second.)

By the way, the liner notes include a copy of a local newspaper review of the show. I always find those interesting, and often the writers get the songs mixed up. The writer of this review is no exception, declaring the band played "Me And Bobby McGee" that night. They did not; they did play "Me & My Uncle," the song most often played by the Dead during their career.

The Grateful Dead opened that night with "The Music Never Stopped," always a fun song to dance to. The mix is a bit strange - Brent Mydland's keyboards are a lot louder than Jerry Garcia's guitar. And then it suddenly goes into "Sugaree," which is a surprise. Jams like that didn't often open shows in the 1980s. Usually the first set was a start-and-stop sort of affair, with the boys pausing between songs to choose the next tune. This "Sugaree" doesn't really stand out until the jam halfway through, which is pretty good. And then, after a somewhat hesitant link, the band goes back into "The Music Never Stopped," and it's a fun little jam. All in all, a very good start to the show.

"Big River" features a good jam, particularly Brent's work on keys. This is an excellent rendition of this tune. The band is starting to really cook here.

Jerry's voice is straining at times during the first set, but that only adds to the emotional impact of a song like "It Must Have Been The Roses."

It's fun to hear an electric version of "On The Road Again" (a song that was featured on the band's 1981 live acoustic release, Reckoning). And Bob Weir's laugh in the middle of the song is delightful. Bob is clearly enjoying himself on this one, and that helps this little gem become one of the first disc's highlights.

The first set ends with an excellent version of "Let It Grow." Jerry's guitar is gorgeous at moments. And listen to that guitar rhythm around the 1:40 mark - it last only a few seconds, but is fun. And then the song takes on a sort of Latin feel a little before the three-minute mark. This song features a nice long jam with lots of changes. And I love that sweet moment when it comes out of the jam just before that great ending, with Bob giving it his all.

The Dead start the second set with "China Cat Sunflower." The jam toward the end of "China Cat Sunflower" has a groove the song usually doesn't have, and it's definitely cool - a great energy. And that leads into "I Know You Rider." Jerry's playfulness at the beginning of that tune is wonderful. And the vocals sound perfect. Ooo-wee, a nice fast-paced rendition.

From there, they go into another great tune to dance to, "Man Smart, Woman Smarter." This is a song that is led by its beat, and drummers Bill Kreutzmann and Mickey Hart are completely grooving on it.

Maybe it's me, but something sounds really off during the beginning of "Ship Of Fools." And though Jerry had just turned forty, he still sang, "With thirty years upon my head." Jerry's vocals are really straining on this one.

"Playing In The Band" starts off as nothing special, but the jam really takes off. It is the drummers who get the jam up to a good level, with everyone following the pace they set approximately five minutes in. And check out some of the crazy stuff Brent is doing. Wow. What started as a sub-standard "Playing" becomes the highlight of this disc. Seriously, you have to check it out.

"Playing" leads flawlessly into "Drums," and Bill and Mickey really go at it. They keep up the pace for the first two and a half minutes of their solo before going off into Weirder territory. And "Space" begins with the drummers still on stage, which is always great. And this is a pretty intense "Space" - no hesitant notes here, no meandering. This is loud, insane, haunting and dangerous. I love it. It's due in large part to the presence of the drummers through the first three minutes. After they leave, "Space" calms down quite a bit.

"The Wheel" begins sweetly, as all the great versions of this song do, then builds in energy. I never get tired of this song, and I always thought it was a great tune coming out of "Space" (they played it out of "Space" at my first show).

"Morning Dew" is always appreciated, and this version is great. Jerry gets really quiet on "I guess it doesn't matter anyway," and the entire band gets quiet behind him. It's beautiful. And of course it then builds again before the end. It ends abruptly, going into a somewhat messy "One More Saturday Night" to end the second set.