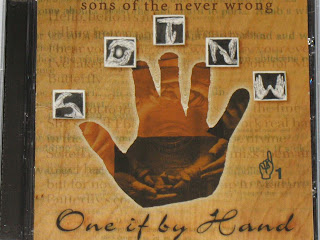 Sons Of The Never Wrong are a Chicago-based folk trio. One If By Hand is the band's third album (and the first on Gadfly). There is a joy and an exuberance and an intelligence in this music. I'm really taken with this band's sound. All but one track are originals. And each of the three members contributes tunes to this album. Deborah Lader also did the cover artwork, as well as some of the photography.

For a moment at the beginning, the album's opening track, "Madame Butterfly," is sung acappella, the three voices each saying "Hello." Then the acoustic guitar comes in, with the three voices coming together, and then each taking its own part. I love their voices - each powerful, each distinct, but the beauty is truly realized when all three are combined. This song has a sweetness, in its instrumental section as well as in the vocals.

Here is a taste of the lyrics: "I gotta go now, I hear the beating of her wings, and every few days she gathers up five or six of us/and she makes us sing songs of how we love her, of her beauty, and all that it belies/hopeless refrains from the cocoon of madame butterfly." I really love this song. It's folk, but this band has its own style, its own sound. "Madame Butterfly" was written by Bruce Roper.

"Comet" is beautiful. It's a sweet song, almost like a prayer from one heavenly body to the rest. And with humor; check out the song's last two lines: "And that's me I'm a lonely planet, and that's you old William Blake/and that's love sometimes lost in heaven: God's first and His last mistake." "Comet" was written by Sue Demel.

"Jonah" reminds me a bit of The Nields, something in the vocals and the spirit of the piece (also, at times, this song calls to mind Laura Love). This one is driven by a full percussion sound, which is wonderful (think Clan Dyken or Entrain). Even with these similarities, the song is original. And even a cliche like "you can run but you cannot hide" feels fresh on their tongues. "Jonah" was written by Bruce Roper.

"Hallelujah For The Getaway"

"Hallelujah For The Getaway" is folk-pop ("folk-pop" is kind of fun to say; try it), and it has a bright energy. This song has a reference to one of my two favorite writers in the line, "With her good friend Vonnegut." (There is a reference to my other favorite writer in the album's final track, with its line "We can be Romeo and Juliet.") "Hallelujah For The Getaway" was written by Bruce Roper.

For the album's only cover song, the band tackles The Beatles' "Getting Better" from Sgt. Pepper's Lonely Hearts Club Band. They certainly make it their own. It takes a moment to recognize it. But their bluegrass-like take on it works. And during the song's most serious lines, the song's tone becomes more serious too. It really drives those lines home (also by pausing just before them): "I used to be cruel to my woman/I beat her and kept her apart from the things that she loved." And then the song's brighter tones return on the lines "I'm doing the best that I can/I admit it's getting better." It's actually really effective.

The odd phrasing in "Magnetic Poetry" completely hooked me right from the start. The first line is "Words can bleeding, hearts we're reading, this one's for thee." Then it's revealed this is poetry on a refrigerator - those individual words we all like to play with, arranging those few words into something interesting. Thus, "magnetic poetry." The last lines are "I fell for your magnetic, technical, genetic, kinetic, apoplectic, frenetic, apathetic, phonetic, cryogenic, metallic, eclectic, italic, magnetic poetry." I could do without the bit of laughter at the end; my own laughter suffices. This one was written by Deborah Lader.

Some of "Teva" (and yes, the title refers to the sandals) is done in a sort of talkin'-folk style. This song is about looking for answers in that usual, crazy places. These lines had me laughing: "Soon became a Unitarian shortly after the dawning of the age of Aquarius ending up in an ashram to proclaim reality/She was married to a Mormon, she was a pastor for Zoroaster, and her personal trainer was in bed with Shirley MacLaine/And L. Ron Hubbard had a web page that she was taken with at a certain age, but when I found her she was standin' in the rain." (The female echo of "Shirley MacLaine" is great.) And sure, L. Ron Hubbard is an easy target, but one we should take aim at whenever possible. (I think the only way to deal with Scientology is to ridicule it out of existence.)

"Teva" was written by Bruce Roper, and features David Lader on harmonica.

"Home Hymn" really took me by surprise. It's gorgeous, while of course being sad too, with lines like "I'm ready now come pick me up, I'm sick and tired of this earthly stuff." I am astonished at how much I love this song. Usually songs with such strong and obvious spiritual tones turn me off. At times, it reminds me a bit of Stephanie Mechura. It also has hints of "Amazing Grace." "Home Hymn" was written by Sue Demel.

Joining them on this recording are Al Ehrich on stand-up and electric bass, Heath Chapell on drums and bongos, Carlos Cornier on congas and Latin percussion, Paul Dawidczyk on jaw harp, Cathy Kuna on cello, David Lader on harmonica, Bob Long on keyboard, Victor Sanders on electric guitar, Ira Sullivan on tenor sax and flute, Evan Silver on vocals, and Barb Silverman on washboard.