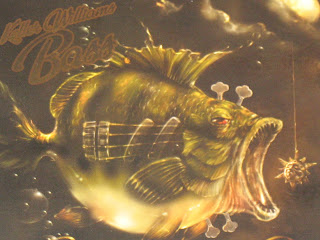 Keller Williams has since the beginning of his career tried different things, never being one to stick to the path of the tried and true - and the results have been wonderful. His has always been an original approach to music, often performing as a one-man jam band, playing to his own loops. (That's how it was when I first saw him open for RatDog more than a decade ago.) Keller Williams doesn't shy from exploring new musical territory. It's one of the things his fans appreciate about him. He even released a children's record, simply titled Kids (though I suppose these days that's not an unusual thing for an artist to do).

Once again, with Bass, his 17th album, he's trying something new. For this album he has recorded no guitar parts. That's right, no guitar whatsoever. Also, no looping.

Bass is not a solo album. The music on this release is that of a trio, which they refer to as Kdubalicious. The album is full of bass (as the title suggests), and so full of good grooves that Keller fans will certainly appreciate. And those who are new to Keller will find themselves getting blissfully immersed in these tunes. And Grateful Dead fans take notice: one of these tracks was co-written by Robert Hunter.

"The Sun And Moon's Vagenda"

The lack of guitar is immediately apparent with the album's opening track, "The Sun And Moon's Vagenda." The bass takes a prominence that it usually doesn't. The song is driven by bass and keys. The bass even takes a lead part a few minutes in, and it's delicious, my favorite section of the song. The band functions as a jazz trio during an extended instrumental section. A funky jazz trio. But can someone tell me what a "vagenda" is?

The band switches to a fun reggae groove for "2 B U." This is music that makes me want to turn off my lights, light up a joint, and dance around my apartment. Here is a taste of the lyrics: "And where do you go when your body stays behind?/I want to go there just for a minute/How do I get there/Will you show me the way/Will you please share?" I absolutely love the keys on this song. And there is a moment when the keyboard reminds me a bit of Jerry Garcia's guitar from the late 1970s (around the three-minute mark).

Because of the prominence of the bass, a lot of this album has a great funky feel, and "Hey Ho Jorge" in particular has a heavy funk edge. Even in its lyrics - "I eat the funk." This song features some humorous lines, like "I don't think I've been right since I cut my hair." Also, as in several songs from this release, Keller makes playful references to his own music and collaborators, like in the line "I just want to be with you and grow a beard like Larry Keel." Larry Keel, of course, performed on the Keller & The Keels albums, Grass (2006) and Thief (2010).

"I Am Elvis" sounds a lot like Paul Simon - Paul Simon in the 1970s, that is. It has that sort of easy groove, that friendly vibe that marks Simon's 1970s output. But it is then mixed with a bit of a reggae beat for the chorus: "And it's all in my mind/I live inside my imagination/It's all in my mind/My imagination stays on vacation/And I like to go there when I have the time/Which is all the time." There is even some playful whistling halfway through the tune. I don't think it's possible to dislike this music.

"Super Hot" is probably the album's best track. This song made me burst out laughing. And I have to wonder when guys first hear this song in concert if they suddenly let go of the girl in front of them. Because Keller sings, "For every super hot girl in the front row/There's a super insecure dude standing behind her/Holding onto her waist as she pelvic thrusts the stage."

This song, more than any other, lifted me out of my home and carried me to a concert venue. The picture this song paints is so vivid. And of course it's got a great groove. It's a song about performing, including jokes about teleprompters. Most of the jokes are about Keller himself, in lines like: "People ask me why I play with my eyes closed/Is it a form of concentration" and "Or are you just high/And you want to hide your eyes," and then a bit later "I'm just probably high." I completely love this song. I'm fairly certain you will too, unless you've never been to a rock concert.

"Hobo Jungle" was co-written by Grateful Dead lyricist Robert Hunter. For anyone expecting "Terrapin," forget it. Think rather of some of the sillier, lighter fare of his solo albums. That's not to say this is a bad song. Not at all. In fact, I really dig this tune. It's seriously fun. And it does have something to say. But it's not one of those sublime lyrics that Hunter delivers on occasion.

Check out these lyrics: "I don't want to tell you, honey/What your baby does for money/I wouldn't tell you if I knew/But I can guess, and so can you/I don't want to tell you, honey/What your neighbor does for money/I don't know what she does for cash/But it just might've give you the rash/But money doesn't come for free/The last time I checked my memory/Ways to get it run the gamut/From 'praise the lord' to plain 'goddamnit.'" Pretty damn good, right? And I love Jay Starling's work on keys.

The cover art is by Richard Biffle.