Valentine's Day Music: Folk And Acoustic Songs For Your Holiday 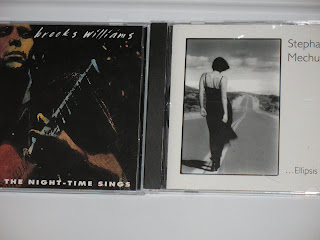 Most people will agree that Valentine's Day is a greeting card holiday. But also most people will play along. So this year, instead of buying the usual chocolate, flowers, jewelry, why not make your love a mix CD? It's more personal and unusual. The folk and acoustic world offers a lot of sweet love songs that would be perfect for such a mix. Here are a few that you might not think of right away.

Brooks Williams is a darn-good songwriter, and he has a wonderful voice. "Hard Love" has always been a favorite among his fans, and is one of those songs guaranteed to move its listeners. It's a song not about being sweet for your loved one, but being strong.

Here is the chorus: "Hard love, I need you/Hard love/Tell me if you think I'm doing wrong/And if I'm sinking down, give me a strong arm/Hard love, I need you/Hard love/I can count on you to hold me tight/Can I count on you to steer me right?" And then at the end of the song he sings, "You're the one who knows me even better than myself/You can love me tender, can you love me tough?"

"Hard Love" was included on Brooks Williams' 1991 release, How The Night-Time Sings.

"I'm So Happy You're My Girl" by Dave Coffin

"I'm So Happy You're My Girl" is an unabashed love song. The title says it all. It's a song that celebrates love and a relationship, with great lines like, "When you open up your arms you'll find me in them." This song also benefits from some sweet violin-playing by Jane Park.

"In The Dark With You" by Greg Brown

Greg Brown has a deep, sexy voice. It's a voice that seems to be speaking directly to you, singing in your ear, and so his love songs have a special potency. And then his lyrics are so honest, and at times so sweet. Here is an example from "In The Dark With You": "Reaching out my hands/I know you are too/'Cause I just want to be in the dark with you."

"In The Dark With You" is the title track from his 1985 release.

"Just The Jester Fool" and "Give In, Give Up" by Ellis Paul

"Just The Jester Fool" is one of Ellis Paul's earliest efforts, and it still manages to hit home emotionally. It's a simple and beautiful song. Here are some of the lyrics: "She then says lovingly/If I were the queen and you were just the jester fool/I would love you as my king/Just because I do, I do love you."

"Just The Jester Fool" was included on Ells Paul's first CD, Say Something (1993). It was also included on the End Construction album, Resume Speed (1990). And before that, it was actually included on Ellis Paul's very first cassette, Urban Folk Songs (1989), which was released on CD in 2000.

Another of Ellis Paul's songs that would work well for a Valentine's Day mix is "Give In, Give Up," which is one of his best songs. It's so beautiful, and so positive, especially when he sings, "And the colors we choose/Are yellows and blues/Let's paint the sky over and over." His voice is amazing on this song. He sings, "If I fell down on my knees/If it came to pleading/Would you take me as I am/Your touch is all I'm needing."

"Give In, Give Up" is from Ellis Paul's phenomenal 2002 release, The Speed Of Trees.

"Tonight I'll Be Staying Here With You" by Bob Dylan

The song begins, "Throw my ticket out the window/Throw my suitcase out there too/Throw my troubles out the door/I don't need them anymore/'Cause tonight I'll be staying here with you."

"Tonight I'll Be Staying Here With You" is from Bob Dylan's Nashville Skyline (1969).

"You're The One" by Stephanie Mechura

Stephanie Mechura has a pretty and distinct voice. "You're The One" is a perfect song for a Valentine's Day mix, with lyrics like, "Looking in your eyes I realize/I'm who I'm supposed to be/And supposing that for once I would succumb/You're the one."

And for those who may be having a bit of trouble in their relationship, why not include a song that admits that? A perfect choice would be Kate Jacobs' "Good Enough" from her 2011 release, Home Game.

How is that for honesty in a love song? And listening to Kate's delightful voice, one gets the sense that this relationship has a much better chance of lasting than most.

That should provide a good starting point for a Valentine's Day mix.

Note: I originally posted this on January 18, 2011 on another site.
Posted by Michael Doherty at 6:44 PM