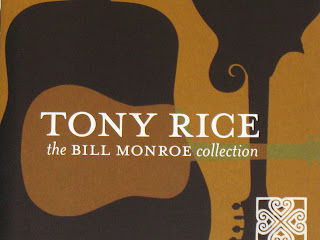 Anyone with even a passing interest in or a casual familiarity with bluegrass knows the name Bill Monroe, and with good reason. He is often referred to as The Father Of Bluegrass, and really helped to popularize the genre. He wrote some pretty amazing material, which Tony Rice presents in this collection.

Tony Rice himself is almost as well known as Bill Monroe. He is an amazing guitarist who was a member of The David Grisman Quintet for the first several years of that band's existence. He's also played with Peter Rowan and Jerry Garcia, among others. It's not only his playing, but his voice that endears him to fans of music. Tony Rice has one of those voices that sounds so friendly and so true - a perfect voice for bluegrass. It also has power, as can be heard on a song like "Molly And Tenbrooks."

This is a collection of previously released music.

The Bill Monroe Collection opens with "I'm On My Way Back To The Old Home," one of those joyous fast-paced bluesgrass tunes to set the mood and raise your spirits. In addition to featuring some wonderful playing by Tony Rice on guitar, this song boasts some excellent banjo-playing by J.D. Crowe. This recording was originally released on The Bluegrass Album (1981).

"When You Are Lonely"

"When You Are Lonely" is a slower, sweeter tune written by Lester Flatt and Bill Monroe. Tony sings, "You told me you always would love me/And no one would ever come between/But it seems to me you've forgotten/All those things you told me/Someday sweetheart when you're lonely/And have no one to care for you/Remember the heart you have broken/And the one that has loved you so true." Ah, the true, faithful heart of the bluegrass singer, and the woman who can't appreciate him. For some reason, bluegrass music is really adept at expressing that predicament, and the resulting emotions.

"When You Are Lonely" was included on The Bluegrass Album Volume 4 (1984).

"Jerusalem Ridge" is an instrumental. In this tune you can really hear the connection between bluegrass and Irish folk, especially in the fiddle. And at six and a half minutes, this is a nice long tune with a good jam. "Jerusalem Ridge" was originally included on Unit Of Measure (2000).

This collection features three other instrumental songs - "Stoney Lonesome," "Gold Rush" and "Cheyenne." "Cheyenne" has some interesting changes and some sections that are beautiful.

"Muleskinner Blues" is obviously a song not written by Bill Monroe, but one that Monroe became known for. He recorded his version of this song in 1940. And Tony Rice's version is simply perfect. I absolutely love his voice on this one - listen to him hold that note around three minutes in. Ooo-wee!

"Muleskinner Blues" was written by Jimmie Rodgers and Vaughn Horton, and is the only song in this collection not written or co-written by Bill Monroe. This recording was originally featured on Cold On The Shoulder (1984).

"On And On" is one of my favorites from this collection. It's a great song, and Tony's guitar-playing is particularly impressive. Again, this is one about a true heart, and the woman who doesn't appreciate him - but with a surprising twist in this great lyric: "I've cried, I've cried for you, little darling/It breaks my heart to hear your name/My friends, they also love you, my darling/And they think that I am to blame." That's wonderful. This song was originally included on Tony Rice Plays And Sings Bluegrass (1993).

The Bill Monroe Collection ends with one of those Jesus songs that pop up in bluegrass from time to time. I have mixed feelings about these songs ("River Of Death" is the other one on this CD). One one hand, musically "You're Drifting Away" is a great song. There's no denying that. On the other hand, the message is a bit off-putting for those of us who are non-believers. But I do wonder how earnest these religious tunes are, though maybe I'm just projecting. There is a line in this one that makes me laugh: "You're drifting away/On down the dark river, I'm sorry to say." It's the "I'm sorry to say" that I love. That line tells me they're not completely serious.

The Bill Monroe Collection is scheduled to be released January 31, 2012 on Rounder Records.
Posted by Michael Doherty at 11:49 AM