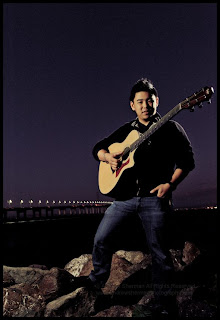 It starts, "I don't believe in fate, no/And I don't believe in love." And yet it is a sort of love song. After all, he sings, "Well I believe in second chances/Second dates and second glances." This is also a song that's about music itself, with lines like "I don't need your dictionary to know what this song's about."

This song is part sweetness, part sarcasm, and it's a combination that works. "Fall Again" also features some wonderful work on violin by Mejin Leechor.

This is the first single from what will be a full-length CD of all original material. Musicians to be featured on the album include Roger Kim on guitar, Mejin Leechor on violin and vocals, Brendan Liu on trumpet and flugal horn, Dario Slavazza on tenor saxophone, and Mark Shawver on percussion. (It will be Wesley Woo's second full-length CD; the first, This Always Works, Sometimes, was released in July of 2011.)

"Fall Again" is available as a download. Also, CD copies of the single will be available at Wesley Woo's concerts. The full-length album is projected to be released this summer. Wesley Woo And The Halftime Heroes are based in the San Francisco area.
Posted by Michael Doherty at 1:04 PM