Valentine's Day Songs For Your Valentine 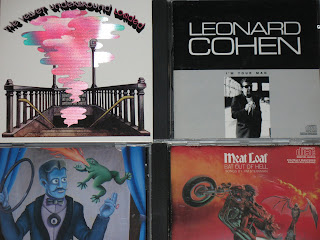 Yes, Valentine's Day is a greeting card holiday. But for those who are going to play along - and probably most will - instead of buying the usual chocolate, flowers, jewelry, why not make your love a mix CD? It's more personal and unusual.

You can choose some of his or her favorite songs, or songs that have played a significant part in your relationship. What song was playing when you met? What was the first song you danced to? What was the first concert you went to together? What song did you listen to over and over on a road trip?

But here are some ideas for other songs that might fit on a Valentine's Day mix. Songs you might not think of straight away.

"From Where I Stand" by The Loomers

Jon Svetkey, lead singer for The Loomers, wrote a lot of humorous and cynical love songs at the beginning of his career, songs like "Girlfriend For Sale." But then something happened, and he began writing love songs in earnest. One of the best is "From Where I Stand," from The Loomers 1997 release, Escalation.

Here is a taste of the lyrics: "Laughing as I tripped to greet you/Smiling at the frown on my face/I knew that moment I was gone forever/Knew that I was in the right place." The repeated line is, "From where I stand this world ain't nothing but you and me." Perfect.

"As We Go Along" by the Monkees

"As We Go Along" is the best song from the Monkees film Head, and one of the best songs of the band's career. It's a gorgeous song, with a wonderful folk bent. And it has some excellent lyrics, including these lines: "And you shouldn't be shy/For I'm not going to try/To hurt you or heal you/Or steal your star."

That line - about not trying to heal someone - is wonderful, and a rare idea in music, and in life. And as such, it's a perfect song for Valentine's Day, to express a rare and pure love for someone.
Head was recently re-released as a three-disc box set. The bonus tracks include an alternate mix of this beautiful song, with that great extended ending.

"Darling Be Home Soon" by The Lovin' Spoonful

"Darling Be Home Soon" is a beautiful love song written by John Sebastian. Check out these lyrics: "I think I've come to see myself at last/And I see that the time spent confused/Was the time that I spent without you/And I feel myself in bloom/So darling be home soon/I couldn't bear to wait an extra minute if you dawdled/My darling be home soon/It's not just these few hours, but I've been waiting since I toddled/ For the great relief of having you to talk to."

Seriously, what other song can you think of that has the words "dawdled" and "toddled"?

(As a side note, The Lovin' Spoonful was the band that was originally going to be used for the television program that eventually became The Monkees.)

"I'm Sticking With You" by The Velvet Underground

"I'm Sticking With You" is such a silly, and yet totally sweet (and innocent) song by The Velvet Underground. Maureen Tucker sings lead on this one, "I'm sticking with you/'Cause I'm made out of glue/Anything that you might do/I'm gonna do too." And Lou Reed sings, "I'll do anything for you/Anything you want me to."

This was included as a bonus track on the Fully Loaded Edition of the Velvet's album Loaded. A different version was released on the soundtrack to Juno.

Velvet Underground and Lou Reed fans might also want to include "I Love You," two versions of which are also included on Fully Loaded.

"You Belong To Me" by Jo Stafford

This is a beautiful song about a somewhat possessive love. Jo Stafford's version features Paul Weston & His Orchestra. Bob Dylan also recorded a wonderful rendition of this tune. Dylan's version was included on the Natural Born Killers soundtrack.

That soundtrack, however, is the biggest mess - Trent Reznor has a lot to answer for his decisions on that one. There is even some stupid dialogue from the film playing over the Dylan track. Who would do that? Trent Reznor, that's who. He produced and assembled the soundtrack (my vote for the worst soundtrack ever - not in terms of the songs, for some of my favorite songs are included - but in terms of its production).

"Kiss You All Over" by Exile

One really can't go wrong with Exile's classic song, "Kiss You All Over." With its simple '70s disco beat, and its straight-forward lyrics: "I don't know what I'd do without you, babe/Don't know where I'd be/You're not just another lover/No, you're everything to me," it's sure to please (or at least tickle and amuse) your partner.

"I'm Your Man" by Leonard Cohen

There really isn't a sexier song than Leonard Cohen's "I'm Your Man." And any woman who doesn't completely melt to this song is clearly an android sent from another planet to destroy humanity, so watch out. Here is a taste of the lyrics: "If you want a lover/I'll do anything you ask me to/And if you want another kind of love/I'll wear a mask for you/If you want a partner/Take my hand/Or if you want to strike me down in anger/Here I stand/I'm your man."

"I'm Your Man" is the title track from Leonard Cohen's 1988 release.

"Oh Jean" by The Proclaimers

The Proclaimers had an insanely giant hit with "I'm Gonna Be (500 Miles)" (due partly to its inclusion in the film Benny & Joon). That's a great song, but the album it's from, Sunshine On Leith (1988), contains a lot of excellent songs, including the wildly energetic "Oh Jean." This song has a man professing his love for the woman who let him get lucky. Has ever a man been so thankful for a little action?

Still, it's a love song, with these lyrics: "I want you forever, I want you for good/So I'm gonna treat you the way that I should/For your soul and body my heart's gonna pound/Even after the day that I'm laid in the ground."

"Paradise By The Dashboard Light" by Meat Loaf

And for those who have been together a long time, why not include a humorous choice or two, such as Meat Loaf's "Paradise By The Dashboard Light"? In a moment of youthful unbridled lust, he promises to love his woman forever.

And there is also "Love Is..." by King Missile. This isn't for everyone, but it might be for you. Check out these lyrics: "Love is beautiful/Like birds that sing/Love is not ugly/Like rats/In a puddle of vomit." Indeed. "Love Is..." is the first track on King Missile's 1994 self-titled release.
These, of course, are only a few of the many songs that might be appropriate for a Valentine's Day mix. Songwriters are constantly tackling the subject of love and relationships. And sometimes they get it right.

Note: I originally posted this on January 11, 2011 on another site.
Posted by Michael Doherty at 6:32 PM