Peter Rowan: “Calling You From My Mountain” (2022) CD Review 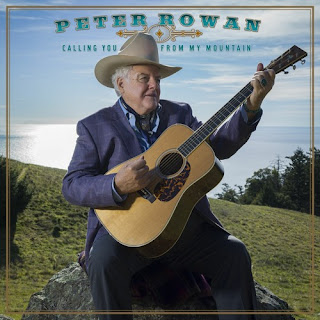 The country went sideways in 2016 and hasn’t yet quite righted itself. Fortunately, throughout this continuing madness, there are some folks we can rely on to lift our spirits and keep a sense of both hope and joy alive. One such person is Peter Rowan, who has been releasing consistently outstanding music for several decades. His new album, Calling You From My Mountain, features mostly original material, along with some great covers. This follows his 2018 release, Carter Stanley’s Eyes. Joining the singer and guitarist on this release are Chris Henry on mandolin and backing vocals, Max Wareham on banjo and backing vocals, Julian Pinelli on fiddle, and Eric Thorin on acoustic bass. There are also special guests, including Shawn Camp and Billy Strings, on certain tracks.

Peter Rowan opens the album with a lively bluegrass rendition of Woody Guthrie’s “New York Town,” and immediately the clouds begin to lift, even as he sings of poverty. “I didn’t have a nickel, didn’t have a solid dime.” He also reminds us, “Every man has a little hard luck sometimes.” I love the optimism contained within that line, the idea that these hard times are passing. And this music seems to reflect that. We will get through the difficult times. This is a good choice to begin the album. Peter Rowan then slows things down a bit with “Veil Of Deja Blue,” a song he wrote with Lorin Rowan. This one tells of a wandering gambler, and it features some absolutely excellent vocal work. “Every town I ramble round/I’m always missing you/Shadows falling on my heart/In shades of deja blue.” And I love that fiddle. This is a beautiful song.

“Come Along Jody” is the disc’s first instrumental track, composed by Tex Logan. It features some excellent work from each of the musicians, and shows that Peter Rowan, in addition to maintaining a strong voice, still can play the hell out of a guitar. That’s followed by a wonderful rendition of The Carter Family’s “Little Joe.” There is great joy in the playing, particularly in the banjo work by Max Wareham. Then Peter Rowan and the other musicians turn playful with “The Song That Made Hank Williams Dance,” clear right from the bit of banter at the start of the track. Shawn Camp joins Peter Rowan on lead vocals for this one. “She’s the dance that made Hank Williams sing/And she’s the song that made him dance.” That’s followed by another original composition, “A Winning Hand,” which begins as a slower, pretty, contemplative number and then after a minute or so picks up a bit. On this track, Billy Strings joins Peter Rowan on guitar, delivering some good work. “And now the game has ended at last/In the cold, grey light of dawn/The hand of time unties the blinds/In the morning, we are gone.” That instrumental section at the end is beautiful.

“From My Mountain (Calling You),” essentially the title track, has a sweet, friendly and serene sound. It is a song that reaches out to all of us listening, a song to remind us we are not alone. Molly Tuttle joins Peter Rowan on lead vocals, delivering a wonderful performance. And then Lindsay Lou adds her voice to the chorus. There is also a short, but really nice instrumental section. This is one of the disc’s highlights. The album’s second instrumental track is a fun, joyful rendition of Bill Monroe’s “Frog On The Lilly Pad.” As you might expect, it features some great bluegrass playing.

The disc includes two particularly powerful original compositions, and they are presented back-to-back. The first, “The Red, The White And The Blue,” eases in. “In the year that I was born/Our country was at war,” Peter Rowan sings at the track’s beginning. That was, of course, World War II. Molly Tuttle again joins him on vocals, but on this track also plays clawhammer banjo. And Shawn Camp joins Peter Rowan on guitar. This is a powerful, but also gentle song. And it lyrics contains a Hamlet reference: “And the years have come and gone/Battles lost, battles won/Still we sleep perchance to dream/And we feed the war machine.” The second of those two tracks is “Light At The End Of The World.” Check out these lines: “Like Noah of old, I’m building an ark/To float on the waters of a world growing dark.” Mark Howard joins him on vocals on this one. There is also some strong work on mandolin.

Things gets bluesy with a great cover of Lightnin’ Hopkins’ “Penitentiary Blues (Big Brazos),” which features another excellent vocal performance and some wonderful stuff on fiddle. That’s followed by “Dream Of Heaven,” which has a more somber sound and features backing vocals by Shawn Camp and Mark Howard. Shawn Camp also plays guitar on this track. “And who of us will linger here (who of us will linger here)/And say all is forgiven (and say all is forgiven)/Even those who dwell below (even those who dwell below)/Will sometimes dream of heaven.” The disc concludes with “Freedom Trilogy,” a medley of three original pieces, beginning with “Eagle’s Nest,” which features a strong vocal performance. “All the king’s horses, all the king’s men/Can never put tyranny on us again.” That leads straight to “Panther In A Cage.” Then the pace begins to pick up for the third section, “Freedom State Of Mind,” which was co-written by Rex Foster. “And I will love my enemy/Be truthful to his face/Embrace him in his sorrow/Hold him in a state of grace/Freedom.” Billy Strings joins Peter Rowan on lead guitar on this track, delivering some great work. All the musicians get a chance to shine here. It is a strong ending to yet another fantastic release from Peter Rowan.

Calling You From My Mountain is scheduled to be released on June 24, 2022 on Rebel Records.

Posted by Michael Doherty at 12:05 PM