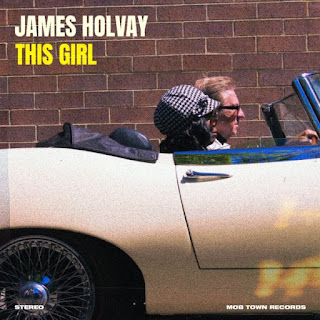 James Holvay might still be best known for hits that he wrote for The Buckinghams, such as “Kind Of A Drag” and “Hey Baby (They’re Playing Our Song),” but he was also a member of The Mob (usually written as The MOB), a Chicago-based rhythm and blues band that began in the mid-1960s. He was on vocals and guitar. That group released several singles and a couple of LPs before breaking up in 1980. On James Holvay’s new EP, This Girl, he revisits a couple of songs he co-wrote with Gary Beisbier for The Mob, and delivers some new original material. This EP follows last year’s Sweet Soul Song, which featured original tunes with a classic soul sound. The musicians on that CD return to back him on this new release. They include Les Falconer on drums and backing vocals, James Manning on bass, Stu Pearlman on keyboards, Ron Douglas on backing vocals, and Cliff Curtis on backing vocals. And Duane Benjamin provides the horn and string arrangements on most tracks.

The disc opens with “Hot ‘N’ Heavy Love,” which begins with some gorgeous work on piano, an introduction that feels like it could lead to some majestic classical music piece. So it comes as a bit of a surprise when the song kicks in with a delightful disco and funk vibe. It takes but a moment to make that adjustment, for this is a totally enjoyable song, featuring some nice work on percussion. “There’s no uncertainty/Making sweet love for now and forever.” And toward the end, the musicians jam a bit. That’s followed by “This Girl,” the disc’s title track. This is a fun number, a love song in praise of a certain woman. And as we listen, we insert our own love into the song, because of course this song is about my girlfriend for me, just as it is about yours for you. Right? This song has such a cheerful, bright vibe. “And this girl makes your heart beat fast/Spend your cash/And make you want to last/And this girl makes you want to dance.” Sure, most of the lyrics might not be breaking new ground, but they are forever relevant. And they work particularly well with the classic sound. The horns on this track are by Larry McCabe and the Minneapolis Horns, with an arrangement by Stu Pearlman.

The first of the Mob songs that James Holvay revisits on this EP is “I’d Like To See More Of You,” the title here shortened to “More Of You.” This song was released by The Mob as the flip side to “Give It To Me” in 1970, and was also included on that band’s self-titled debut LP. This new version features strings and a more intimate, passionate vocal performance. As the track is reaching its conclusion and beginning to fade out, he delivers a bit of playful spoken word: “You know, I’d like to see more of you/You know, grab a cup of coffee/Get to know each other a little bit/Man, I’d like that.” That’s followed by “Whatever She Wants,” a good, soulful number with some smooth vocal work, including the backing vocals. “If you want to keep that girl for the rest of your life/Better do everything that you can/Treat her like a lady and do what’s right/And you’ll be a happy man.”  This is a completely enjoyable track. The EP concludes with the other track co-written by Gary Beisbier, “She’s Gone Away.” This song was originally titled “Lost,” and under that title it was included on the first Mob LP, as well as on a single, the flip side to “Where You Lead.” This is a mellower and moving song, about a man unsure how to accept losing the woman he loves. “I think I just lost the only girl I’ve ever really loved.”

This Girl is scheduled to be released on June 24, 2022 on Mob Town Records.

Posted by Michael Doherty at 7:23 AM