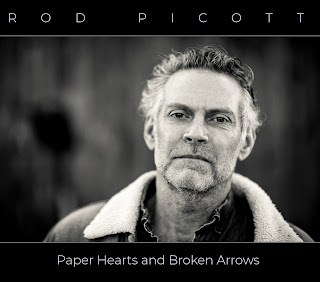 Born and raised in New England, singer and songwriter Rod Picott has made Nashville his home for the last couple of decades. He’s released more than a dozen albums during that time. His new one, Paper Hearts And Broken Arrows, features all original material, written or co-written by Rod Picott. And the folks he has chosen to collaborate with on these songs are accomplished singers and songwriters themselves, people like Slaid Cleaves and Mark Erelli. Joining him on this release are Lex Price on bass and tenor guitar, Juan Solodzano on pedal steel and slide guitar, Evan Hutchings on drums, and Neilson Hubbard on piano and backing vocals.

This album opens with a gentle and beautifully sad song titled “Lover,” Rod Picott’s voice containing the ache and longing of which he sings. These are the first lines: “Been without love for so long/I’ve forgotten the words to that song.” Yes, he gets right to the matter. And these lines about aging stand out: “So, lover come find me/I know most of my best is behind me.” Those lines also remind me of a short Leonard Cohen poem: “Marita/Please find me/I am almost 30.” The last few years have been maddening for all of us, but imagine being alone during the pandemic, knowing you still have something to give, but having no one to give it to. There is still hope in his voice as he sings, “And I’m tired and I’m cheated/But I’m not defeated.” This track features some pretty work on both pedal steel and piano. Rod Picott then gets bluesy with “Revenuer,” which creates an interesting atmosphere, especially with that great work on electric guitar. Here his vocal delivery is full of attitude and danger.

“Mona Lisa” is a sweet love song about two ordinary people. In this one too he mentions being tired: “I’m tired and my engine is all torn down.” Ah, isn’t that the overriding state for most of us these days? And so it makes perfect sense that it is reflected in music. This song also has a cheerful, hopeful aspect, which is appreciated. “Someone will come someday/And there ain’t no telling when/And find all the parts of me and put me/Back together again/But I am waiting here for you/Are you waiting somewhere for me too?” That’s followed by “Dirty T-Shirt.” I love the way the pedal steel sets the tone. This is a pretty song. Check out these lyrics: “She was an angel on my shoulder/Sleeping deeply in a dream/I didn’t move so not to wake her/Though I had fire running in my veins/Forget the lipstick and mascara/You don’t need any disguise/I want you just the way you are.” Then “Frankie Lee” is a song told from the perspective of a man sentenced to die, a man who by the time of his execution is no longer the same person who committed the crime. So, in a way, this one too is about aging, something on all our minds these days, I suspect. This song was written by Rod Picott and Jennifer Tortorici. Rod Picott follows that with another portrait, “Sonny Liston,” this one about the boxer. This song reminds me a bit of Greg Brown.

Rod Picott’s previous album, Wood, Steel, Dust & Dreams, featured songs that he wrote with Slaid Cleaves, a lifelong friend of his. This new album includes two tracks co-written by Slaid Cleaves. The first is “Through The Dark.” Here is a taste of the lyrics: “This world is hard from the day you’re born/We spend our whole life long/Licking honey from thorns/Just trying to hold on to our hope.” These lines also stand out: “Oh, baby, don’t it feel like we’re/Headed to the end of times.” I think we can all relate to that sentiment. Then “Valentine’s Day” has a really good opening line, “You used to hold me, but I held you back.” I love that you can hear that line at least a couple of ways. This is a song of regret and longing, a song of some introspection, and it features an excellent vocal performance, supported mostly by acoustic guitar. There is some nice work on electric guitar in the track’s second half. That’s followed by “Washington County,” another powerful song, this one featuring some great work on harmonica. This song was co-written by Mark Erelli, a songwriter with whom you are likely familiar, for his material has been covered by several other artists. “Once a month we hit the food bank/Once a month we reach the end/Of the rope we’re clinging onto/And the check the county sends.” I love Rod Picott’s passionate vocal performance.

“Lost In The South” also shows what a talented songwriter Rod Picott is. Check out these lines, about a specific spot in Nashville: “Moved to down here/With everything to my name/Jammed inside an old Chevrolet/Stayed at a motel room on Trinity Lane/Hookers and the dealers/Saw my out-of-state plates/They were banging on the door all night long/I couldn’t sleep a minute for the carrying on.” These days the divide between the so-called red states and the blue is wider than ever, and it must be strange to live in the south, particularly for someone from the northeast. That song is followed by “Mark Of Your Father,” a song about the effect parents have on their children, and it includes lines about Marvin Gaye, who was shot dead by his own father. The album concludes with “Make Your Own Light,” the other track co-written by Slaid Cleaves, this one having an intimate sound, Rod Picott’s voice supported by acoustic guitar. “You ask again and again/In the dark of the night/You try and you fail and try again/To make your own light.”

Paper Hearts And Broken Arrows was released on June 10, 2022 on Welding Rod Records.

Posted by Michael Doherty at 1:08 PM