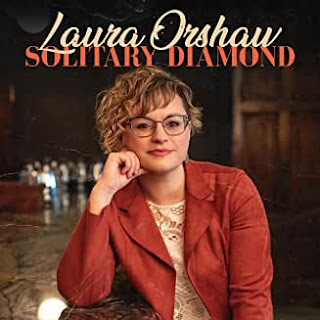 Fiddler and vocalist Laura Orshaw has performed with several groups, and is a member of The Po’ Ramblin’ Boys. She has now released her debut solo album. Titled Solitary Diamond, this album contains some delicious bluegrass music, featuring mostly material written by other folks, along with one song that she co-wrote. Joining her on this release are Catherine “BB” Bowness on banjo, Reed Stutz on mandolin, Casey Campbell on mandolin, Alan Bartram on bass and backing vocals, and Tony Watt on guitar, along with several guests on various tracks.

The album opens with “I’ll Trade You Money For Wine,” which was written by Robbie Fulks and included on his 2013 album Gone Away Backward. That original recording features some good stuff on fiddle, and you can be sure that Laura Orshaw’s rendition does as well. This version also features some nice work on mandolin, and a strong vocal performance. Laura Orshaw is certainly not shy, not reluctant to belt out key lines. And check out these lyrics: “Pockets of change don’t drive my worry down/Diamonds don’t make me shine/It’s a short life and a long time underground/I’ll trade you money for wine.” Oh yes, I think we can all appreciate those lines. Life is short, and getting shorter all the time. I think I’ll have a drink. Tim O’Brien joins Laura Orshaw on harmony vocals on this track. We then get a sweet rendition of Jim Ringer’s “Linda’s Out There On Her Own,” here titled simply “On Her Own.” This version is delivered as a duet with Trey Hensley. “Oh, but didn’t we sound good when we sang together?” Yes, indeed! Plus, this track features a whole lot of good banjo work. In fact, there are two banjo players on this one. Eli Gilbert is the special guest on banjo here.

Laura Orshaw delivers a fast rendition of “After You,” a song written by Jerry Chestnut and originally recorded by George Jones. “After you, when someone smiles at me I wonder what’s the price/After you, I’ll be suspicious of anything that’s nice.” Though it is delivered at a more rapid pace, this version still features some pretty work on fiddle, particularly in that instrumental section in the middle. Also, there is some nice back and forth on mandolin and banjo. Jana Mougin and Garnet Imes Bowman provide backing vocals on this track. “Loving you, it’s just too good to last forever/So the world could end tomorrow, I don’t care.” Why is it that lines about the end of the world stand out these days? That’s followed by a cover of The Gordons’ “Rock-A-Bye Cindy.” It has a rather gentle bluegrass sound, but there is a darkness surrounding this song. “No, he ain’t the man I met long ago/But some trouble’s deceiving/Some tears fall slow.” I love the way Laura Orshaw delivers this one, the way she draws out certain words, like “night” on the line “Rock-a-bye Cindy, good night.” Lindsay Lou joins Laura Orshaw on backing vocals. That in turn is followed by a cover of The Kendalls’ “I’ll Be Hurtin’ Either Way,” a song from that duo’s 1979 album Heart Of The Matter. As you might guess from its title, this is a sad song, though this rendition has a rather cheerful sound, thanks in large part to the banjo. “I don’t want to go, but there’s no other way/But it’s so hard to leave you/And it’s so hard to stay/I can never win/In this circle that I’m in/‘Cause you know I’ll be hurtin’ either way.” Jana Mougin and Stephen Mougin join her on backing vocals.

“High Mountain Rising” is a slower number with a passionate vocal performance and a pretty instrumental section in the second half. Laura Orshaw’s work on fiddle in particular is gorgeous. Ronnie Bowman and Garnet Imes Bowman provide harmony vocals on this track. Laura Orshaw then picks up the pace with another Gordons cover, “I Can’t Settle Down,” which comes from Our Time, the same album that featured “Rock-A-Bye Cindy.” It is interesting to me that there is always something appealing in songs about rambling, while there is also always something appealing in songs about home. Go figure. This track features three fiddle players. Joining Laura Orshaw are Brittany Haas and Jenee Fleenor, with Fleenor also providing some harmony vocals. So, yes, fiddle is at the heart of this track. Fellow Po’ Ramblin’ Boys member Josh Rinkel is on guitar. Then we get “Lonely Is My Name,” which Laura Orshaw wrote with Josh Rinkel, who also plays guitar on it. It is the only song on the album that Laura Orshaw had a hand in writing, and it is one of my favorite tracks. Alecia Nugent joins her on vocals for this one, their voices blending beautifully. “And the need for just one more/Reason to sit there thinking/And drive yourself insane/I’m your new companion/Lonely is my name.”

“The Band Of Jesse James” is the second of the album’s songs penned by Jim Ringer, this one coming from his 1977 LP Tramps And Hawkers. Alecia Nugent joins Laura Orshaw again on backing vocals, along with Alan Bartram, who is also on bass. “He told me that he loved me just in passing/He was playing, but I’m still paying/‘Cause I fell.” That’s followed by “Veins Of Coal.” There are a lot of great songs about mining. In fact, the Freakons just put out an entire album of mining songs. On this album, Laura Orshaw delivers a powerful rendition of the Daniel Stearns song. Check out these lines: “Let the wind blow through my ribcage/Let the sunshine bleach my skull/One day my tears will reach the ocean/And my bones will turn into coal.” Alan Bartram provides some good harmony vocals. Laura Orshaw’s fiddle work is as moving as the vocal performances. This is another of the disc’s highlights. Then Jana Mougin and Stephen Mougin provide backing vocals on “Speak Your Heart,” a song written by Mark Simos. The album concludes with “Hank,” which was written by Cy Winstanley and originally included on the 2014 Tattletale Saints release How Red Is The Blood. Laura Orshaw’s version moves at a faster pace, and features some wonderful playing on mandolin and banjo. “I want to sing Hank Williams songs/They must be right, ‘cause honey he ain’t wrong.”

Solitary Diamond was released on May 27, 2022 through Dark Shadow Recording.