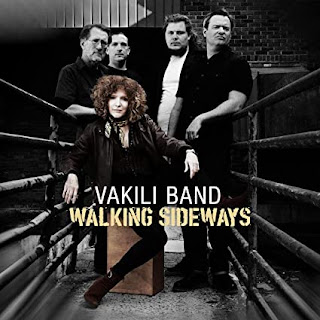 On a recent episode of Saturday Night Live, Michael Che made this joke: “The Rock And Roll Hall Of Fame announced that Dolly Parton would be inducted this year, along with Eminem, Lionel Richie and Carly Simon, which begs the question, What is rock and roll?” Indeed. Sometimes I wonder if rock music still exists. Well, Vakili Band is here to shout a resounding “Hell yes” in response. The band is led by vocalist and guitarist Lily Vakili, and includes Ben St. Jack on electric guitar and backing vocals, Joel Darrow on harmonica and backing vocals, Gordon Kuba on drums and backing vocals, and Matt Jovanis on bass. Their new album features all original material, written or co-written by Lily Vakili. Joining the band on this release are Jim Tyndall on bass and backing vocals, David Amlen on keyboards and acoustic guitar, Cecile Williams on backing vocals, and the horn section of Alexandre Desrivieres, Scott Peebles and Peter Lin.

This album kicks off with its title track, a rock song with a punk edge and a wonderfully raw vocal performance, the kind of voice that has attitude, a snarl in it, a voice ready for a fight. “I don’t think I need you anymore,” she sings near the beginning of this one. That sense of defiance comes from some experience, and some pain. “I gave my heart and soul/I’ve got nothing left to show/Yeah, but a weakness for liquor and crying/And a few broken bones.” As for this song’s ending, there is a strangely spiritual bent to that final word, with the backing vocalists joining her, a surprising and wonderful touch. That’s followed by “Sharp Devil,” a song that Lily Vakili first recorded back in 2013. As she begins this one, her vocal delivery has a more intimate quality. But soon she’s belting out certain lines. This one has a bluesy element, particularly that great work on harmonica. There is also some delicious work on keys, but it is her vocal performance that is the focus here. Just listen to the way she delivers these lines: “Maybe tomorrow I’ll find the strength that I lack/Maybe tomorrow I’ll show the devil my back/And when sweet temptation rears her lovely head/I’ll wrap a chain around my neck/And I’ll fill my pockets with lead.”

Something about the way she delivers certain lines reminds me of Meat Loaf, like the chorus of “We Got Dreams.” There is that power. “She’s got dreams and she won’t let go/No matter how many times people tell her so.” And the verses have a punk delivery. This music is just so damn good. “He looks around, he asks himself/What the hell am I doing in a place like this?” This song is about pursuing your dreams, and doing it with a fist up in the air and a dance in your step. Then “Freeman” begins kind of softly, with a darker, more somber vibe. Then when this one kicks in for the chorus, it has something of a catchy pop sound, which comes as a surprise. Another wonderful surprise is the song’s short drum solo toward the end. And then “Rachel” just seriously rocks and is one of my personal favorites. This is what rock and roll is all about, and includes some great stuff on electric guitar. This song is about women not taking any shit. Check out these lines: “Someone said it’s a man’s world/And I’d better sit myself down/Because of my so-called biology/I don’t get to swing it around.” Maybe when protestors are camped outside of rapist Brett Kavanaugh’s house, they can blast this song, make it a party. That’s followed by “She Wants What,” which contains yet another powerful, kick-ass vocal performance.

“When 21” has a different vibe as it begins, a mellower, prettier sound that draws us in. “Who doesn’t want to be bright and young/Life’s nice and easy, every day is fun/No need to think about obligation/Just nice and easy when 21.” This track features some nice work on harmonica. That’s followed by “Facial Recognition Technology,” another of the disc’s highlights. It is an incredibly cool track, and it contains two Shakespeare references. The first, to a line from The Tempest comes early on, when Lily Vakili asks, “Is it a brave new world?” The other is to a line from Macbeth: “Milk of human kindness.” I totally relate to this line, “The only thing that makes sense to me is loving you.” The world is completely crazy and harsh. As she sings here, “Another active shooter/Roams the high school halls/Another hurricane, don’t call it climate change/Just the weather, that’s all/Absolute power corrupts absolutely/Now that’s a fact/That’s why freedom of the press/Is enshrined in the Constitution, baby.” Halfway through, this song really takes off. It is one hell of a great song. I highly recommend checking it out.

“Dreamy Dreamer” is a song that originally appeared on an earlier release, where it was titled “Dreamy Dreamers.” This new version is quite a bit different. “I stand with you in your quest to believe/In justice tempered by compassion.” Yeah, these guys deliver great rock music, but also have something to say. What more could one ask for? The album then wraps up with “Father’s Son,” which comes on heavy and strong, the lyrics delivered as sort of spoken word. “I find myself in an indiscriminate rage/Over misperceived aggressions and slights.” And this track features the horn section. Yes, it’s another highlight. I am so glad to learn that this band exists. Now I need to see these guys in concert.

Walking Sideways was released on February 25, 2022.

Posted by Michael Doherty at 8:08 PM