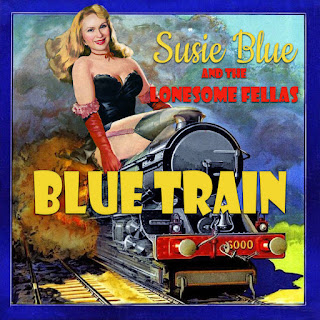 In 2015, vocalist Solitaire Miles released an album titled Susie Blue And The Lonesome Fellas, which showed her taking a new direction, toward country and western swing. Since then, the name has stuck as the band name, and the group has a new album out titled Blue Train. This new release is great fun, and features some delightful vocal work. The band is made up of Neal Alger on guitar, Howard Levy on harmonica, Don Stille on organ, Tom Hope on piano, Chris Bernhardt on bass, Eric Schneider on saxophone, Jack Gallagher on trombone, Phil Gratteau on drums, and Paul Abella on cajon, with Jen Zias and Mike Harvey on backing vocals.

The album opens with “I Wanna Rock,” a totally enjoyable number written by Andy Jarvis of the band Bang Bang Betty And The H-Bombs (and not a cover of the Twisted Sister song, just to be clear). This track features some delicious work by Eric Schneider on saxophone. And check out that guitar work in the second half. “It thrills me and chills me and drills me ‘til I’m feeling sore/But when we get in the groove, I wanna rock some more” (I think in the original, the line is “‘til my feet are sore”). Oh yes, things are swinging right from the start of this album. The music then gets bluesy (but still swings) with a cover of Ruth Brown’s “Sweet Baby Of Mine,” here titled “Big Sweet Baby,” another delightful number, this one written by Robert Sharp, and featuring a wonderful vocal performance, as well as some great work by Howard Levy on harmonica. I love the way that instrument and others react to certain lines and phrases that Solitaire Miles sings. Plus, there is a cool lead on saxophone. The band follows that with another Ruth Brown song, “Lucky Lips,” this one written by Jerry Leiber and Mike Stoller. What a wonderful rendition, with some great stuff on guitar, a cool bass line, and, perhaps the best element, those playful backing vocals by Jen Zias.

Dominic Halpin joins Solitaire Miles on vocals for a sweet cover of Carl Perkins’ “Forever Yours.” The vocal work here is outstanding. And check out that gorgeous, melancholy harmonica. This, for me, is one of the disc’s highlights. The group then picks up the energy again with a great rendition of “Love And Kisses,” this one featuring more wonderful vocal work, with Jen Zias again joining Solitaire Miles. I also love that lead on guitar in the second half. That section will have you dancing. This track has a playful ending, which is just a delight. The band dips into the blues again with a fantastic, sexy rendition of “Hummin’ To Myself,” one of my personal favorite tracks. And yeah, she does hum, and even that is seductive. She delivers one hell of a strong vocal performance. “Won’t somebody listen to me?” Of course! And speaking of sexy, check out that lead on saxophone. Oh yes, everything about this track is working perfectly.

“Blue Train,” the album’s title track, written by Mel Harker, comes on strong, with an intense pulsing rhythm. It includes some great stuff on harmonica. And I totally dig that bass line. There is also a powerful lead on guitar. Toward the end, there is a spoken word section, as the drums mimic the rhythm of a train, and the harmonica acts as the whistle. That’s followed by another train song, “She’ll Be Gone.” This is a cool rendition, with Mike Harvey joining Solitaire Miles on vocals. I love how that guitar howls and soars over that steady, mellow rhythm in the middle. The band then delivers a hopping blues rendition of “Chills And Fever,” with Neal Alger getting another chance to shine during that lead on guitar. This track also features some nice backing vocal work, particularly at the end. And on an album titled Blue Train, it just makes complete sense to include a rendition of “One Way Ticket To The Blues.” And this version is another of the disc’s highlights. “Choo choo train chugging down the track/Got to travel long, never coming back/Ooh, ooh, got a one way ticket to the blues.” In addition to a wonderful vocal performance from Solitaire Miles, this track features some nice work on organ. There is certainly something playful about this one, and that adds to its appeal. I enjoy this track more each time I listen to it.

“How Could I Help But Love You” is delivered basically a duet with the harmonica. And it is that work on harmonica that makes this rendition something special. That’s followed by “Give Up That Honey,” a rocking blues number that is a total delight. It features a lively, strong vocal performance, and some good backing vocal work, plus more wonderful stuff on harmonica. But it is that rhythm that keeps us going. The fun continues with a good rendition of Cookie Jackson’s “Do You Still Love Me,” here listed as “Do You Love Me?” It’s those backing vocals that really sell this track. That’s followed by “In The Palm Of Your Hand,” another totally enjoyable track. “Oh How I Miss You Tonight” is a classic number that gently swings, and features yet another strong vocal performance. Listen to the way she delivers the lines, “Each moment, though we’re apart/You’re never out of my heart.” Wow. Yes, this track is another highlight of the disc, even before that great lead on sax. The album concludes with a rendition of “The Peter Gunn Theme” with vocals. You don’t often hear the lyrics to this one, but I’m seriously digging this version. There is plenty of attitude in her delivery, which works so well. And there is some excellent stuff from the brass section. It’s a great way to close out the album.

Posted by Michael Doherty at 2:40 PM