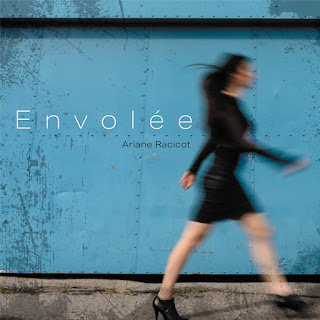 Ariane Racicot is a pianist and composer based in Montreal. You might have seen the video of her solo piano rendition of Queen’s “Bohemian Rhapsody.” Now she has released her debut full-length album, Envolée, which features all original compositions. Joining her on this release are Antoine Rochefort on electric bass and Guillaume Picard on drums, with Martin Plante playing drums on one track.

This album opens with “Vertige,” which begins in a rather dark and somber place. There is even a sense of danger, of something menacing in the air. That soon that gives way to a light, but a light tempered by melancholy memory. Then there is a frantic moment on piano, sounding like an urge to run, to flee. This is an exciting track, with moments of calm beauty mixed with moments of panic, but throughout is the sense of confronting the fear, like a journey that she gains control of and enjoys. And in the second half a cool drum solo emerges, which I appreciate. “Vertige” is followed by “Coffee And Cigarettes.” This one has a warmer vibe as it begins. And of course because of its title, it makes me think of the Jim Jarmusch film, of conversations, of short pieces that build off of each other. This track soon begins to build and grow, and there are different moods, sometimes more contemplative, sometimes more excited. It has a full sound, particularly in the more passionate sections, that seems to gather us up and carry us along. In the middle, there is a good lead on bass. And just before the end, the direction changes again, and she delivers a rather beautiful, touching ending. This is one of my favorite tracks.

“Bicycle Ride” gets right to the action, beginning with a fast pace and featuring some wonderful work on drums. There is an energy right from the start, sort of like when you decide to go out and get some exercise, be it a bicycle ride or a run, and there is that joy from the moment you begin, that sense of personal power. Then after a few moments, this track relaxes just a bit, turns inward, just as we do when we are out for a run. The excitement is still there, of course, and there is something of a dance to the movement, which is delightful. I particularly love that drum work toward the end. Ariane Racicot then changes gears with “Crépuscule,” which has a much mellower, relaxed vibe at its start, perhaps signaling a time for introspection, or perhaps just a time to let out a long breath and look to the fading light in the sky. It is a time for letting go of tension, and letting your mind wander both backward and forward in time. She delivers some gorgeous work on piano, and there is something romantic in the style. As this track nears its conclusion, Antoine Rochefort gets a chance to perform a rather moving lead on bass. Ariane Racicot changes gears again with “À Ciel Ouvert,” the album’s concluding track, which has an intensity right from its start. It’s interesting the way she allows a brief moment to breathe before going into the second section of this track. Things then build again.  It is on this track that Martin Plante joins the trio on drums. There is a heaviness to this piece, at least for a time. But it does relax at a certain point, and as it builds again from there, a sense of excitement courses through the piece, nearly air of celebration. Things then get intense again just before the track’s final gentle moments.

Posted by Michael Doherty at 9:33 AM