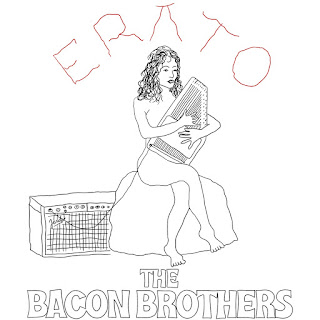 Though his film career had started several years earlier, Kevin Bacon became known to a lot of folks through Footloose, a movie that is all about the music. That was back when original soundtrack meant original soundtrack. And so it seemed perfectly natural when he started his own band a decade or so later with brother Michael Bacon. They’ve put out ten releases over the last twenty-five years. Their new EP, Erato, contains five original songs, with both brothers contributing material. Both Kevin Bacon and Michael Bacon sing and play guitar on these tracks, with Kevin also providing some work on percussion. Joining them are Paul Guzzone on bass and backing vocals; Tim Quick on guitar, mandolin and backing vocals; and Frank Vilardi on drums.

The disc opens with “In Memory (Of When I Cared),” the only track on which the brothers collaborated with other songwriters. It was written by Kevin Bacon, Michael Bacon, Desmond Child and Berkay Birecikli. Desmond Child has a lot of songwriting credits. He co-wrote “I Hate Myself For Loving You” with Joan Jett, Aerosmith’s “Angel” with Steven Tyler, and Bon Jovi’s “You Give Love A Bad Name” and “Livin’ On A Prayer,” among many others. Berkay Birecikli is a composer and music producer known by his professional name, Void Stryker. So there is a significant amount of talent behind this first track, and it shows. The track begins with some interesting percussion, creating a compelling atmosphere. The vocals are then in strong focus at the beginning, with the instruments somewhat softly supporting them. The song soon kicks in, a combination of rock and pop sounds, with a cool vibe running through it. “Lesson learned/Love ain’t fair/Even burned the bed we shared/This song’s in memory/In memory of when I cared.” Chris Day joins the bothers on lead guitar on this track, delivering some memorable work, particularly in the second half. “In Memory (Of When I Cared)” is followed by “Dark Chocolate Eyes,” which has a mellower, more laid-back vibe with a folk and country feel. This one was written by Kevin Bacon. Here is a taste of the lyrics: “You were looking like you just woke up/Something stupid written on a coffee cup/Ready for your close-up/Like magic in a chair/Dark chocolate eyes, angel hair.” There is a kind of dreamy, nostalgic groove to this one, which is wonderful. Then suddenly in the middle of the track, there is something an ELO-type sound to the vocals for a couple of lines. This is one of my favorites. Interestingly, this duo has also recorded songs titled “Grey-Green Eyes” and “Brown Eyes.”

“Let Me Happen To You Girl” has a more playful sound from the start, with an island sound. It’s a lot of fun, and I love that percussion. It’s a good one to dance to, feeling like a celebration designed to raise our spirits, just as the lyrics suggest. “Put your devils on the run/Bring you back into the sun/Let me happen to you, girl/Let me happen to you, girl.” And somehow it becomes even more enjoyable as it goes on. This song was written by Michael Bacon. We can continue dancing with “Erato,” the EP’s title track, written by Kevin Bacon. This is another completely enjoyable track, with more great summer sounds. Erato is one of the nine muses in Greek mythology, the patron of lyric and love poetry, so clearly a good choice of goddesses to be addressed in songs. “Here I am still staring into space/Are you a goddess or a muse/Are you just a figment of my blues.” I love that last phrase, “figment of my blues.” That’s great. This track features some strong vocal work, and I imagine it’s a crowd-pleaser at the duo’s live performances. It certainly has that potential. By the way, The Bacon Brothers are putting on several concerts in support of this new release, so check out their tour schedule to see if they will be near you. The EP concludes with “Karaoke Town,” an interesting song, with a surprisingly darker folk sound. I wasn’t sure what to expect from a song with that title, but I guess I was thinking it would be more of a pop tune. So, yes, this is far more interesting than what I’d imagined it would be, featuring a passionate vocal performance. It was written by Kevin Bacon, and produced by his son, Travis Bacon. “When they tried to take away the axe that you have learned to swing/You poured honey on your wounds and you got back in the ring.”

Posted by Michael Doherty at 3:34 PM