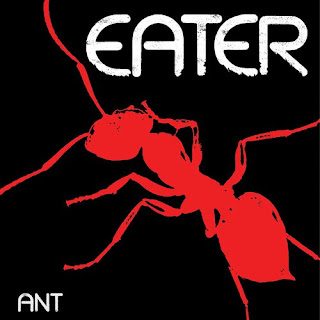 Eater is a punk band that was around in the late 1970s, forming when its members were still in high school. They put out only one album, which at the time was titled The Album, but which was supposed to be titled Ant. It came out in 1977, and the story behind it is pure punk, how the guys were only just learning how to play their instruments, and how time was wasted in the recording studio, and how the mixes that were released weren’t at all what the band was going for. The story is included in the liner notes of the new release, Ant, which contains the mixes they wanted. The songs are also presented in a different order, and some songs are not on it at all. “Get Raped,” “Luv ‘N’ Peace,” and their covers of “I’m Eighteen” (listed as “Fifteen”) and “Sweet Jane” are all absent from this new release. And one track that wasn’t on the original release, a cover of “Jeepster,” is included here. Most of the tracks are original, written by singer and guitarist Andy Blade and bassist Ian Woodcock.

The original album opened with “You.” This new version begins with “Anne,” and yes, it sounds a whole lot better than the original mix. The original had a certain raw charm, no question, but hearing this version, it is clear that the earlier recording wasn’t finished. And, look, this is still 1970s punk, and fortunately they didn’t screw with it on this new release, so it still has a raw edge. “And I love you for your body/But not for nothing else/When I get tired of you/Then I’ll go find someone else.” That’s followed by “Space Dreaming,” a fun, and incredibly brief, rock song, featuring some good guitar work, particularly at the end.

The original record had two Velvet Underground covers – “Sweet Jane” and “Waiting For The Man.” The opinion expressed in the liner notes is that their recording of “Sweet Jane” was awful, which I suppose is why it’s not included here. I don’t think it’s quite as bad as they say, but it’s certainly not very good. However, “Waiting For The Man” is included. It is delivered at a much faster pace than the Velvet Underground original, which works really well. The fifteen seconds of studio banter that was included on the version on The Album is cut here, which is fine. This is a cool rendition. That’s followed by “Lock It Up,” one of the album’s best tracks, and I think the only track to retain its original spot in the sequence. This song has a terrific energy. “I’ve got no car, I’ve got no bike/But I’ve got no misery.” “You” was originally positioned as the album’s opener. It begins with some great stuff on bass, and is another lively, exciting number. You can see why it was chosen as the opener, but of course it works in this spot too. The band also covers David Bowie’s “Queen Bitch,” a song from his Hunky Dory album. It’s a choice that makes sense, particularly on the original record, since that included two Velvet Underground songs, and this song has a strong Velvet Underground vibe. As with Eater’s cover of “Waiting For The Man,” this version picks up the pace from the original. It’s a damn good rendition. It seems that maybe two seconds have been trimmed from the beginning.

“No Brains” is a slower one, in which Andy Blade sings, “I said you ain’t got no brains/You ain’t got nothing at all.” I’m sure you can think of a few people you could sing those lines to. It begins to speed up toward the end. When I’m listening to this song, I can’t help but think of Return Of The Living Dead, and how those zombies would have walked away still hungry. Then we get a cover of T. Rex’s “Jeepster,” which was not included on The Album, but was released as the flip side to Eater’s “Lock It Up” single. This cover jumps and pops; they’re clearly having a good time with it. That’s the last of the album’s covers. It’s followed by “I Don’t Need It,” another good punk song with attitude, and one that is clearly written by teenagers, with lines like “Well, I’m always getting letters/Saying I should be in school/I’m always being told/What I should do.” But it also contains these lines: “And I’d bet you love to score/With a fourteen-year-old whore/Don’t think I’d put it past you/Just because you’re an inspector.”

It seems the first couple of seconds of “Public Toys” have been trimmed, and I’m not sure why. I like that drum intro from the original. Still, it’s a solid track. It’s followed by “Bedroom Fits,” which was titled “No More” when it originally appeared on The Album. Interestingly, the beginning of this one has likewise been trimmed, just that false start, which isn’t necessary. This is one of this disc’s coolest tracks, with a great energy, and some good rock and roll guitar work. The lyrics mention Lou Reed. This band was obviously really into Velvet Underground. Then “Room For One” likewise comes on strong. Oddly, the beginning is cut from this one also. In the original release, they count off the beginning, and in this version you only hear the number “four.” The chorus to this track is rather catchy. “There’s only room for one/There’s only room for one/There’s only room for one/And it’s always her.” This disc then concludes with “My Business,” which has an angrier sound, a good amount of attitude.

Ant was released on June 3, 2022 through Cleopatra Records.

Posted by Michael Doherty at 11:41 PM