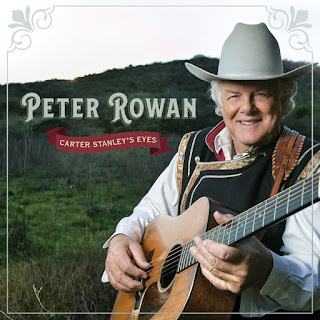 Is there anything that works better at relieving stress than good bluegrass music? Listening to bluegrass seems to make troubles become lighter, lift from our shoulders and backs and maybe even disappear in a small cloud of smoke above our heads. And I know I’m far from the being the only one who desperately needs that these days. Every morning I wake and wonder what fresh hell is brewing in Washington, D.C. Well, one musician we can rely on to help us cope is Peter Rowan, and he has a new album coming out soon, Carter Stanley’s Eyes. As you’d guess from the album’s title, there are some Carter Stanley tunes here, as well as a couple of Ralph Stanley compositions. There are also several original compositions written by Peter Rowan, though at least one of these too is connected to the Stanley Brothers. The band backing Peter Rowan on this release is made up of Blaine Sprouse on fiddle and vocals; Patrick Sauber on banjo, guitar and vocals; Tim O’Brien on guitar and vocals; Chris Henry on mandolin and vocals; Don Rigsby on mandolin and vocals; Jack Lawrence on lead guitar; Paul Knight on acoustic bass; and Jamie Oldaker on snare drum and percussion. This album follows 2017’s My Aloha! It includes liner notes written by Peter Rowan and Pete Wernick.

Peter Rowan kicks off the new album with an original tune, “Drumbeats On The Watchtower,” a song that was recorded by Ralph Stanley, who gave it this title (it was originally titled “Wild Geese Cry Again”). This is exactly what I need today – some real music played by talented musicians. There is some damn fine playing here, particularly on fiddle. By the way, Peter Rowan did previously release this song as “Wild Geese Cry Again.” It was included on his 1996 album Bluegrass Boy. That version features a completely different band, with Peter Rowan on mandolin. And Ralph Stanley did record it as “Wild Geese Cry Again,” on his 2004 album Great High Mountain. At any rate, under whichever title, it’s an excellent choice to open this album, with a fantastic vocal performance. I especially love the way he delivers these lines: “I wrote a letter to my darling/I received no reply/In the Black Hills I hear rumors/In my dreams, battle cries.”  That’s followed by “A Tiny Broken Heart,” a song written by The Louvin Brothers and Eddie Hill. This rendition by Peter Rowan has a sweet sound, particularly in the blending of voices, and it’s followed by another cover, a good version of the traditional tune “The True And Trembling Brakeman.”

The fiddle is the focus at the beginning of “The Light In Carter Stanley’s Eyes,” the album’s title track, an original song by Peter Rowan. This song tells a story about a meeting with Bill Monroe and Carter Stanley, a story delivered largely as spoken word, and featuring some wonderful humor (“And Bill Monroe introduced me to Carter Stanley and said, ‘Carter, this here is Peter Rowan. He thinks he’s a bluegrass boy’”). That’s followed by a Ralph Stanley song, “Let Me Love You One More Time,” a song recorded by The Stanley Brothers And The Clinch Mountain Boys. This one features more wonderful work on fiddle and some nice vocals. “Take My Ashes” is a beautiful and moving song written by Peter Rowan and Rex Foster. “I’ll be gone/Don’t wait for me/I’ll be gone/But I’ll never leave.”

The album’s first track written by Carter Stanley is “Too Late To Cry,” a sweet-sounding number full of love. This is such a great song, and this version is excellent. “Come take me by my trembling hand/And hold me close to you/And think of all the days gone by/The days when love was true.” This song feels true, you know?  It is certainly doing the trick today, taking me away from my worries about the world. “I know I’ve done you wrong, sweetheart/But now it’s too late to cry.” That’s followed by a fun, playful and lively rendition of “Alabama Bound.” It’s a totally enjoyable track, and is followed by a Bill Monroe song, “Can’t You Hear Me Calling,” another highlight, in part because of the vocals. I also dig the steady percussion on this version.

Peter Rowan delivers a moving and beautiful rendition of The Carter Family’s “Will You Miss Me When I’m Gone” (here simply titled “Will You Miss Me”), with the focus on the vocals, the first several lines delivered a cappella. Written by A.P. Carter, this song mixes gospel and folk sounds. And yes, this version includes the bass vocal part, “Miss me when I’m gone.” The album concludes with a couple of Stanley Brothers songs. The first, “Ridin’ On That Midnight Train,” was written by Ralph Stanley and is one of those fun and fast bluegrass songs. Even as they sing “These awful blues will follow me wherever I may go,” I feel my blues lifting, disappearing. The second is a Carter Stanley composition, “A Vision Of Mother.” Todd Pons (of Bearwallow Bluegrass Band) joins Peter Rowan on vocals for this gentle, pretty song.

CD Track List
Carter Stanley’s Eyes is scheduled to be released on April 20, 2018 on Rebel Records (yup, a day to light up and enjoy some bluegrass music).
Posted by Michael Doherty at 5:45 PM