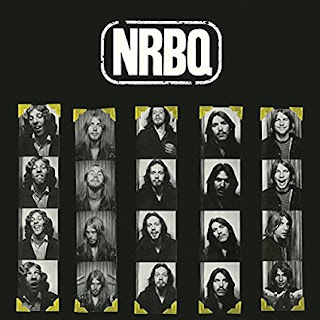 I know that reality is difficult to accept these days, where each day brings at least half a dozen items that leave us bewildered and disgusted. Bonkers is our new normal, and every morning I have to smack myself across the face to see if this warped and ugly reality is in fact real, that a delusional, racist prick is occupying the White House, that the answer to the serious gun problem is more guns, that the absolute worst that humanity has to offer is running the show, that a large number of people still support this hideous bag of fetid air and his fascist associates. One thing that I find particularly difficult to believe is that the self-titled debut album from NRBQ has never before been released on CD. In our world of daily nonsense and bizarre news, this still strikes me as absolutely crazy. How can this 1969 release have escaped a proper CD release? Well, no worries, as Omnivore Recordings is now correcting this problem (ah, if only Omnivore could also correct the problems of the existence of Trump, Pence, DeVos, Pruitt, Sessions and the rest). There are no bonus tracks, but there are new liner notes from Jay Berman, and a bit of the original liner notes (the piece written by Donn Adams). If you haven’t heard this record yet, now is the perfect time to become familiar with this strange and utterly wonderful album.

The album begins with an excited scream. Yes, “C’mon Everybody” is a fun, lively, classic rock and roll tune that functions as a call going out to the world for everyone to enjoy himself or herself, a welcoming of folks to the NRBQ party. The song was originally recorded by Eddie Cochran, and later done by the Sex Pistols. Then surprisingly it’s followed by a jazz piece by Sun Ra, “Rocket Number Nine Take Off For The Planet Venus,” here simply titled “Rocket #9.” It begins somewhat quietly, but of course, after a few moments, it kicks in, becoming a strange number, one that might make you think of Frank Zappa. “Kentucky Slop Song,” the next song, begins somewhat gently on piano, but after “Rocket #9,” we’re not likely to be caught off guard if it suddenly explodes. This one is kind of goofy, kind of silly, kind of wonderful. It’s somewhat jazzy, and I dig the horn (Donn Adams is on trombone) and then the harmonica. And there is plenty of cool work on keys. This delightfully demented song ends up being one of my favorite tracks. “Stop pouring orange juice down my socks.” Indeed!

“C’mon If You’re Comin’” is a cool folk-blues tune, with some nice work on harmonica and guitar. This is a song the band also included on its 1972 album Workshop. I greatly prefer this earlier, looser back porch rendition. It reminds me a bit of some of the work of The Lovin’ Spoonful, and is just wonderful. “Stomp” is a fun rock and roll number. Speaking of fun rock and roll, “Hang Up My Rock And Roll Shoes” is a song I mostly associate with Eddie And The Cruisers (I still love that movie), and on this album “Mama Get Down Those Rock And Roll Shoes” takes that tune and basically responds to it within the structure of the song. Ah yes, there a bit of damn good rock and roll jamming in the middle of this one. This album also includes an interesting rendition of “Hey! Baby,” a song originally recorded by Bruce Channel. It has a cool, loose, relaxed, playful vibe, like the band stumbled onto the song and decided to make it a wonderful country rock bar band tune, and then went on to nail it. The album ends with another playful, odd number, “Stay With Me,” written by Terry Adams and featuring some very cool, jazzy moments. “Stay with me/Don’t leave us here alone/Just hum this happy song.”

CD Track List
NRBQ is scheduled to be released on CD on March 16, 2018 through Omnivore Recordings.
Posted by Michael Doherty at 4:39 PM