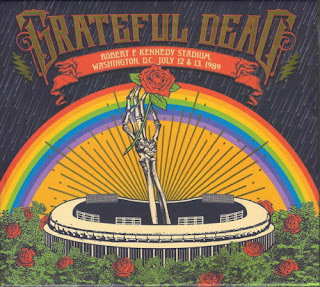 Quite a bit of the Grateful Dead’s 1989 summer tour has been officially released – July 4th became Truckin’ Up To Buffalo, on both CD and DVD, and July 7th was released as Crimson, White & Indigo, while July 17th was released on VHS and DVD as Downhill From Here (and the following two nights were Meet-Up At The Movies selections) I saw only one show that summer, July 2nd, which has not yet been released, though it was shown in movie theatres a couple of years ago. I’ll be patient. In the meantime, two more shows from that tour have been released in a box set – July 12th and July 13th at RFK Stadium in D.C. This six-disc set also includes a booklet with thoughts on the show and lots of photos.

The guys open the first show with “Touch Of Grey,” the band’s only big hit (and the song they chose to open my first show on April 7, 1988), and the song that taught me the meaning of “arrears.” This is a good, cheerful rendition, perfect to get you dancing. Jerry sounds so fucking happy, especially toward the end of the song, and that is enough to make me happy. “We will get by/We will survive.” I need to hear that these days. Bob then turns thing a little rougher with an excellent “New Minglewood Blues,” with Brent doing something approaching scat at one point. It’s a solid rendition, with Bob giving it to us straight. It’s no wonder so much has been released from this tour; the boys were on! And Jerry clearly has energy to spend; you can hear it in the way he delivers “Mississippi Half-Step Uptown Toodeloo.” Then, for those in the Phil Zone, the band goes into the Bob Dylan song “Just Like Tom Thumb’s Blues,” and Phil is certainly having a good time with it. I always loved seeing the band cover this song, in large part because of what Phil would do with the vocal line and lyrics. Here he sings, “They got some hungry creatures there” instead of “hungry women” and he adds a humorous “woo” at one point. And it sounds like he changes “My best friend, my doctor” to “My best friend, my drummer.” And the crowd is totally digging it. Then Brent gets a turn, with an energetic version of “Far From Me,” shouting out “No, we can’t fucking relate at all.” Man, Brent is letting it all out here, at the end singing, “This song is my last fucking song for you, bitch.” Bob then leads the band into one of my favorites, “Cassidy.” Hey, is there a bit of a “Land Of 1000 Dances” tease in this version, first in the tuning before the song starts, and then in the jam for just a moment? Jerry then eases into “Friend Of The Devil.” A vocal miscue is a cause for some laughter among the crowd, but this is a good version. The first set concludes with Chuck Berry’s “Promised Land.”

The second set opens with a nice “Sugaree,” with guest Bruce Hornsby playing accordion (Bruce Hornsby And The Range opened the show). He would, more or less, become a member of the band a little over a year later, after the death of Brent Mydland. Bruce also sits in on a fun and rousing rendition of “Man Smart, Woman Smarter,” which features some delicious work on keys. I love the verse sung by Brent, but it is the jamming that makes this version something special. And there is a wonderful vocal jam toward the end. This is one of the best versions of this one the band ever did. Jerry follows that with a passionate “Ship Of Fools.” Then comes one of the best combinations, “Estimated Prophet” into “Eyes Of The World” (sometimes done as “Eyes Of The World” into “Estimated Prophet”). “Estimated Prophet” builds in intensity, with Bob belting out “Glory, glory!” and later giving us those great shouts. The jam is good, and “Eyes Of The World” emerges from it. They don’t spend too much time on it before Jerry goes into the first verse. At ten minutes or so, it’s certainly not a very long version, but the band packs some tight jamming between verses, and the pace has a sense of urgency. This is not a laid-back, exploratory “Eyes,” and it’s only a couple of minutes after the final verse that the drummers take over. Right before that, Jerry offers some surprisingly pretty work on guitar. Bill and Mickey rumble toward us like a dark and hungry yet powerful beast, before getting into stranger, more thoughtful territory, but with the beast never far away, at one point ready to rise straight out into space from a volcano.

The third disc picks up with an odd and at times unsettling “Space,” the drummers sticking around for the first part of it. Is that like a weird steady footstep, that popping? And at times it feels like a demented spirit leading a carnival. When the band emerges from “Space,” they move into “I Need A Miracle,” taking a few moments to get into it. I believe “I Need A Miracle” was the first Grateful Dead song I ever heard. When I was seven or eight, traveling on the school bus, it played on the bus radio (I think the station was WAAF). I had no idea what band it was, but I liked the song. From there, they ease into “Dear Mr. Fantasy.” This time, there is no “Hey Jude” refrain, but instead Jerry takes the band into a nice “Black Peter.” The second set then wraps up with “Turn On Your Lovelight.” The encore is “Black Muddy River,” a beautiful and moving song that I never got a chance to see the Dead perform.

The second night opens with the briefest of “Dark Star” teases, which must have gotten the crowd excited, even if the acid hadn’t quite taken hold yet. After a bit of tuning, the band gets things going with “Hell In A Bucket.” “I may be going to hell in a bucket/But at least I’m enjoying the ride.” And I’ve always loved the lines about dancing – or crawling – across someone’s grave. This version has a lot of energy. More tuning follows, and then they deliver a good version of “Cold Rain And Snow.” Do these choices of opening numbers show a bit more attitude than the previous night? Maybe, for Bob then dips into the blues with “Little Red Rooster.” “Dogs begin to bark now, hounds begin to howl.” It’s blues with a good groove. And if it’s attitude you want, just wait until that section when Brent takes over on vocals. Bruce Hornsby then joins the band on accordion for “Tennessee Jed,” and his presence seems to energize Jerry more. “Catch a few winks, baby, down under the bed/Then you head back to Tennessee Jed.” Bruce Hornsby also plays on Dylan’s “Stuck Inside Of Mobile With The Memphis Blues Again.” But it is with “To Lay Me Down” that the band really grabs me. This is a moving rendition, with some beautiful blending of voices. Powerful, wonderful. And it seems that Bob wants to keep that going with his choice of “Let It Grow” to conclude the first set, and it’s an excellent version with a strong jam – a nice finish to the first set, and something to get folks excited and optimistic about the second set.

Certainly no one that night was disappointed when they kicked off the second set with “He’s Gone.” Oh yes, listen to Jerry shout out the line, “Nothing left to do but smile, smile, smile.” And yet this version has a kind of easygoing vibe that I love, and the vocal section at the end is absolutely wonderful. What a fantastic way to start the second set. Then “Looks Like Rain” begins gently, and quickly builds to something beautiful. “But it’s all right, ‘cause I love you/That’s not gonna change.” I love Bob’s vocals on this version. But is that real thunder or a thunder sound effect toward the end (starting around the six-minute mark and getting more intense around the seven-minute mark)? Weird, particularly as I’ve heard an audience recording of this show, and I don’t recall that noise on that recording. That leads to “Terrapin Station,” a song that always seemed to contain its own special magic. And this rendition is no exception, lifting me with the line “Inspiration, move me brightly,” and transporting me to another realm. “And I know we’ll be there soon.” The “Drums” segment follows, and soon it’s clear we are still in an unusual realm, a strange jungle, part of a tribe, part of a ritual. Things turn darker later on, as we edge toward “Space.”

The final disc begins with “Space,” which seems to thrust us into another world, an eerie dawn, during which some strange intelligence communicates with us, ultimately setting us at ease. And the band then brings us back, quite literally saying “I Will Take You Home,” Brent’s sweet song to his daughter. I love the way it comes out of “Space,” one of those perfect moments, promising us all that things are okay. But of course, things are about to get crazier again, as the band goes into “The Other One,” kind of easing into it at first, and we wait for that explosion, anticipating it, feeling it even before it arrives. This is one of the band’s most interesting songs, because they approached it differently every time. Or the song approached – or overtook – the band differently each time. And this time it becomes intense and fantastic, a breathing, pulsing monster with multiple limbs, tossing us about, not quite contained. It then slides into “Wharf Rat,” another of the band’s best and most powerful songs. And this night the band is on; listen to those vocals, listen to the crowd responding. “Wharf Rat” leads to “Throwing Stones,” a song that feels particularly pertinent these days (I suppose it always was). “The darkness never goes from some men’s eyes.” Indeed. “The future’s here, we are it, we are on our own.” I love the way Bob repeats “On our own.” And instead of going into “Not Fade Away,” the band chooses to end the second set with “Good Lovin’,” with Brent taking a verse. The encore – so appropriate to the concert’s Washington D.C. setting, and to our lives right now – is “U.S. Blues.” 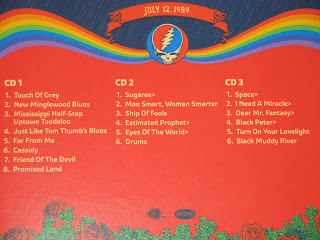 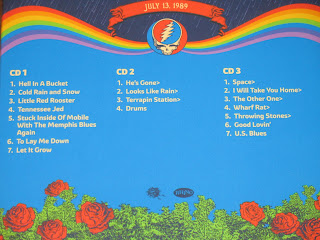