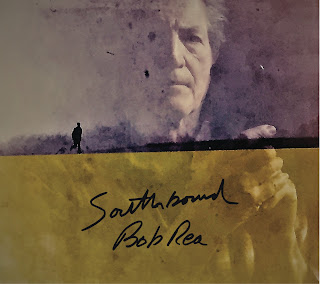 As the world continues to spin out of control, with the absolute worst person we have to offer seated stupidly and arrogantly behind the wheel (a delusional old twit who seems to deliberately aim the vehicle toward the cliff while we all scream from the back seat), I am more and more grateful for good music, and the comfort and solace and understanding and even reason it offers. In a time when the country seems hell-bent on its own destruction, it’s good to hear from individuals who are determined to take things in a better direction, or at least try, and to remind us we are not alone in this frightening void. One new release that I am really enjoying is Southbound from singer and songwriter Bob Rea. This album features all original material, written or co-written by Bob Rea. Joining him on this release are Mike Daly on steel guitar and dobro, Steve Daly on guitar and banjo (Steve Daly also produced the album), Michael Webb on keyboards and accordion, Herschel Van Dyke on drum and percussion, Aaron Shaffer-Hais on drums, Dan Eubanks on bass, Jeremy Holt on mandolin, Lois Mahalia on backing vocals, and Laura Mae Socks on backing vocals. This disc is giving me momentary relief from the horror show blasting from the nation’s capital.

This excellent album opens with its title track, “Southbound,” with a sound somewhere between folk and country, and featuring a train, one of those perennial elements of the genre, and one that always seems to be effective. Something about movement, something about the romance inherent in that image, it always works for me. And check out these lines: “She’s a beautiful distraction in her cowgirl boots/She keeps them babies dancing/So they never grow roots/You might as well be trying to wrap your hands around the wind/Enjoy it while you can/’Cause she won’t be back again.” Plus, there are nice touches on mandolin. “Southbound” was written by Bob Rea and Erik Stucky. Then “Soldier On” has a darker vibe, a thumping rhythm. I love the juxtaposition between the heavy, ominous beat and the joyful sound of the banjo, creating an intriguing effect and pulling me in. This is one of my favorite tracks. “March between the lines of right and wrong/Soldier on, soldier on/Rattle that saber and drag that stone.” This one was written by Bob Rea and Steve Daly.

“Say Goodnight” immediately has a more pleasant and hopeful sound, and its first lines are delivered almost as spoken word, in an immediate and honest fashion: “Wondering and wandering ain’t that far apart/Just two different ways of letting go.” Like this is something he needs to tell us directly, and the delivery is effective over that appealing folk sound. This one too uses the image of a train, although a train that hasn’t yet arrived. And interestingly, it almost refers back to the first track in one line. Whereas in the first song a character is southbound, in this one Bob Rea sings, “And I was nowhere bound.” There is something beautiful about this song, which was written by Bob Rea and Jody Mulgrew. It’s then followed by a more fun, rockin’ number, “The Highway Never Cries.” I’ll be adding this one to my road trip playlist (man, I am itching for a road trip), because of lines like “But the thing about the blacktop is it will take you anywhere/Hitch your wagon to the white line, the white line never lies/Hang your hat out on the highway ‘cause the highway never cries.”

“Screw Cincinnati” has me smiling with lines like “And he whispers romance while he steps on her toes” and “Screw him and that horse he rode in on,” but it also tells a good story with well-drawn characters. I can’t help but love this song, with details like “Her coat and her patience have begun to wear thin” and “She might take out her lipstick and write on his forehead/The words that he don’t want to hear.” Then check out these lines from “Whisper Of An Angel”: “One of these days I’m gonna stand up on the mountain/Look back down at the valley far below/Every step I climb will remind me of how far I have to go.” Not bad, eh? This song has a positive, uplifting sound, urging us to “lay those burdens down.”

“The Law” has a meaner vibe, telling us “You’ll see that the law ain’t got no consciences/No, the law ain’t got no soul.” This one is obviously striking a strong chord. “We oughta know better now/It’s time to get out of town/When the law got a license to kill/You better break the law.” This is a compelling song. “Wanna Do” is a song that makes me feel good from its start; it has an energizing effect somehow, even if its lyrics are perhaps less than cheerful. “It’s a long, long way from heaven/To the streets of San Antoine/In between the sheets with you/Feeling that much more alone/As lonely as the only soldier in a war.” Yeah, this album features some damn good lyrics. This one was written by Bob Rea and Stephen Styles.

“Lonely Is Lonely” is one that got to me right away, perhaps because it was late at night the first time I listened to this album, and I was feeling sad and lonely. Its opening lines are “Three thirty in the morning and you’re feeling so alone/Listening to the clock tick down the hours ‘til the dawn.” And check out these lines: “The only thing that’s harder than leaving is to stay/But you won’t find any pardon/In those halls of yesterday.” This song is so effective, and is another of my favorites. It was written by Bob Rea and Patty Castillo. The album concludes with a sad country song about the end of a relationship, “A Place In Your Heart.” Actually, it seems to take place after its ending, when the hurt is mostly gone. And hell, isn’t that even sadder, when there is nothing, just a void? Yet, there is something hopeful about this song. “I’m all over falling apart/And I don’t need a place in your heart.”

CD Track List
Southbound is scheduled to be released on April 20, 2018 on Shiny Dime Records.
Posted by Michael Doherty at 11:56 PM