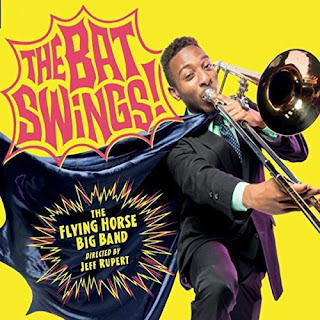 As you are likely aware, the world has gone completely sideways, and total assholes are running (and ruining) the show. How do we combat that? Sometimes it seems what we need is something silly, perhaps even ridiculous. Enter The Flying Horse Big Band, in costume. In Batman and Robin costumes, to be precise. Yes, this is what is required: classic superheroes with horns. Let’s send them to the White House to POW! BANG! WHACK! Donald Trump and the other bad guys. They can wrap up this mess in a half hour (actually, it took the dynamic duo two episodes back in the day, so a full hour), and we can all go back outside and play. By the way – and no arguing with me on this – Adam West was far and away the best Batman. I loved that show as a kid, and I love it even more as an adult. Funniest damn show in the history of American television. And those characters understood proper grammar! Geez, they could defeat Donald Trump on that point alone.

The Bat Swings! features compositions written by Nelson Riddle for the classic series, but with new arrangements, some of them by Michael Philip Mossman (ooh, Mossman sounds like a comic book villain, so watch out!). And there are a couple of other non-Batman tunes. The band is made up of Ryan Waszmer on guitar, Luther Burke on bass, Mudel Honore on piano and organ, Gus D’Angelo on drums, Courtland Beyer on trumpet, Taylor Grubbs on trumpet, Aidan Lakshman on trumpet, Marco Rivera on trumpet, Matt Kerr on trombone, Christian Herrera on trombone, Brian Morris on trombone, Juwan Murphy on trombone, Saul Dautch on baritone saxophone, Andy Garcia on tenor saxophone, Dylan Hannan on tenor saxophone, Kristian Rey on alto saxophone and flute, and Dylan Young on alto saxophone. They also have a few guests joining them on several tracks.

These musical marvels get things going with “Batmobile To Airport,” which has little teases of the “Batman Theme.” We all wanted a Batmobile of our own, didn’t we? Well, settle back and let this big band take you on a cruise around Gotham City. There is a short drum solo just before the end. Jeff Moore plays bongos on this one, and Marty Morell is on vibes. Michael Philip Mossman did the arrangement. Between tracks there is a brief Batman musical cue, like we’re switching locations or something. A wonderful and unexpected treat. Cues like this one are included after several tracks, and are labeled “Bat-Spin,” and if you recall the show, that will make total sense. That’s followed by “Batman Riddles The Riddler,” a cool, groovy jazz number. Ah, who among us can honestly say that he or she hasn’t at least once said, “Riddle me this, Batman”? Mark Taylor did the arrangement for this track, and Marty Morell joins the group on congas. Then, after another brief cue from the show, we get “Batman Blues,” which is a kind of sexy (and at times brash) strut. Cat Woman must be around here somewhere. This is a very cool tune, with plenty of great stuff from the horns. It was arranged by Harry Allen.

There is no “Bat-Spin” after “Batman Blues.” What follows is the “Spider-Man Theme.” Why not? Sure, it’s a bit of a departure from the dynamic duo, but it’s a seriously fun tune, and this is a completely enjoyable take on it. Check out that groovy work on organ, and that cool stuff on guitar. Jeff Rupert (who directs the band) arranged this one. A Batman musical cue takes us from Spider-man back to Batman. And here is Cat Woman, or Miss Kitka, as she calls herself in the 1966 movie. “Kitka” begins with a big of intrigue, a bit of mystery, and soon turns sexy and romantic. By the end of this song, Batman and Cat Woman should be shacking up. There is some really good drumming in the second half of this track, and for a moment it seems like the tune is finished. But then it kicks in again, sounding playful. Things turn romantic again toward the end, as the cat and the bat do a slow dance toward stately Wayne Manor for some interspecies coupling.

“Holy-Hole-In-The Doughnut” sounds from its title like it will be the goofiest track, driven with a youthful Robin-like energy, but it is actually a mellow, easygoing tune with a bossa nova vibe. This one was arranged by Per Danielsson. “Murciélago En La Cueva” (meaning “bat in the cave”) is perhaps the most interesting track, a strange collection of nods to the series, with a bit of that great theme mixed in (isn’t the Batman theme one of the best television theme tunes of all time?). Yeah, it is a joy listening to this track. The CD then concludes, oddly, with a rendition of “Amazing Grace.” It’s wonderful, though – as far as I know – unrelated to the caped crusader. But it’s such a hopeful song that I am happy to hear it. Hey, the whole country seems lost these days, but perhaps soon it will be found.

CD Track List
The Bat Swings! was released on March 12, 2018 on Flying Horse Records.
Posted by Michael Doherty at 1:57 PM