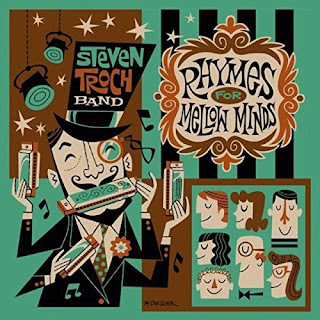 Look, I’ll be honest: I put the new Steven Troch Band disc on because there is a track titled “Going To Dagobah.” A blues song about going to the planet where Yoda trained Luke Skywalker? Oh, hell yes, that’s a song I needed to hear. I was a huge Star Wars fan as a kid, and actually right up until the moment I saw The Force Awakens (fuck you, Disney, you suck). Anyway, it’s a fun track; but then again, the entire Rhymes For Mellow Minds album is fun, and it is far from being strictly blues. This band finds inspiration in all sorts of musical realms, and seems to take delight in combining styles and ideas. And the results are a delight for us. All the tracks are originals, written by Steven Troch. The band is made up of Steven Troch on lead vocals and harmonica, Steve Van Der Nat on guitar and vocals, Liesbeth Sprangers on bass and vocals, and Erik “King Berik” Heirman on drums and vocals. There are also several special guests joining the band on various tracks.

The album opens with “Short End,” a groovy, bluesy number about a man who is perhaps not able to live up to his potential and is making the most of things. “Sometimes life treats you like a bitch,” Steven Troch sings in this one. And that’s the way it seems for basically the entire country these days, but perhaps things are going to turn around soon. (It was great seeing so many folks out marching to end gun violence today.)  That’s followed by “Bad Taste,” a goofy, fun song about a sexy girl of dubious taste. Its opening lines are “She’s got bad taste/She puts ketchup on spaghetti/But, oh lord, she’s so damn pretty.” Aw, this song is a bit mean to Woody Allen (one of the best film directors ever), but it features some really nice work on harmonica.

That’s followed by “Going To Dagobah,” which has a false start and just a bit of studio chatter at the beginning. But then it kicks in, and is a fun number, as I mentioned. But it’s an instrumental tune, so there are no blues lyrics about the long ride to the planet, or about dealing with damp clothing or whatever. However, the harmonica could be a distant relative of the old Jedi Master, and this harmonica has plenty to say. Also, there is a brief R2 noise toward the end of the song. “Going To Dagobah” refers to Luke’s first trip to the swampy planet in Empire (rather than to his return trip in Jedi), as we learn right at the end, when there is a brief imitation of Yoda saying “Yes, found me you have.”  “Long Long Beard” is another fun, delightfully silly number, this one about growing a beard. It has a cool folk vibe, with backing vocalists adding to the wonderful lunacy. “I know it may sound weird/But a man without a beard is like a bar without beer/I’m going to grow myself a beard.” Sounds reasonable. This one also features nice work on harmonica.

“White Line Express” swings, and has a good energy (well, any song about cocaine should have good energy, right?). It features David Loos on tenor saxophone, and Nicolas Talbot on baritone saxophone. “White line express/You’ll feel like a success/And we’ll drop you off/When you’re a complete mess.” There is also some swing to “15 Minutes,” a jazzy number that begins with the sound of an old, scratchy record being put on, the record being this song. And then we’re suddenly within the record and everything is clear. Yes, transported to a more enjoyable time. “Fifteen minutes of sin/Put me in the state I’m in/I’m on my way to Dallas/Oh, it’s a long and rocky road/When the clothes on your back is all you own/And you leave behind the one you truly love.” And how great is that guitar? It makes me so happy.

“Bedroom Eyes” is a sweet-sounding blues song, with good work on harmonica and drums. “I love you in the morning/Dream of you every night/I love you in the morning/Dream of you late at night/I’m crazy about you, baby/I like your bedroom eyes.” The discs ends with a groovy, energetic blues number titled “Walk Away,” featuring yet more good work on harmonica. Bruce James joins the band on piano on this track, and David Loos and Nicolas Talbot return on tenor and baritone sax, respectively. “I’m going to drink just enough to forget/All the troubles that I have/And walk away, just walk away.” Oh yes, that sounds just about right. “I’m tired of talking to myself/Nobody wants to listen/Tired of wasting my money/On these wishing well wishes.” There is some excellent stuff on guitar toward the end. But actually, that’s not the end of the album. That song ends around the 3:50 mark, but at 4:50 a hidden tune begins, just vocals and piano, and just about a minute long. “I can tell by the way she’s lookin’/Something’s cookin’/I can tell by the way it smells/Better stop what I’m doing/Because trouble’s brewing.”

CD Track List
Rhymes For Mellow Minds was released on March 2, 2018 through Sing My Title.
Posted by Michael Doherty at 2:44 PM