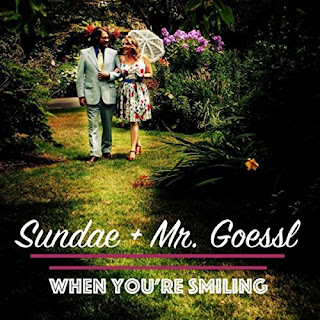 Sundae + Mr. Goessl is the duo of Kate Voss and Jason Goessl, a married couple based in Seattle, and on their new album, When You’re Smiling, they offer some completely wonderful takes on familiar songs. They also offer an abundance of charm and joy, just what we need to stave off the depression and anger so many of us feel daily. They are joined on most tracks by Adrian Van Batenburg on drums, and on a couple of tracks by Sam Esecson on drums.

This album is a delight right from the first seconds of its opening track, “When You’re Smiling.” I love Kate Voss’ voice, which has a beautiful, joyous timeless sound. This rendition is absolutely adorable, and then when it kicks in, it somehow gets even better. It features some really nice, jazzy work on guitar. Could this be my favorite rendition of this song? Certainly, it’s up there among the best. Do yourself a favor and give it a listen. That’s followed by “Perhaps” (which is usually titled “Perhaps, Perhaps, Perhaps,” or “Quizás, quizás, quizás” in the original Spanish). These days, when I hear this song, it’s nearly impossible for me to not think about the British show Coupling, which used it as its theme (performed by Mari Wilson). This is a wonderful rendition, with its own sly style at times, going in some surprising directions. This is one of the tracks to feature Sam Esecson on percussion. And I love the melodica.

“Bye Bye Blues” is a perfect song for this duo to cover. Listening to that early version by Les Paul and Mary Ford, it seems like it was custom-made for these two. Though this version takes more inspiration from the Peggy Lee version. Sundae + Mr. Goessl’s take on it is playful and joyful, with some fun work on melodica over that steady, happy rhythm. Okay, is it just me or is there a moment at the beginning of the lead guitar part that reminds you of Steve Miller’s “Abracadabra” (just for a moment, at the 1:31 mark, it sounds like that section near the end of the Steve Miller song; or perhaps I’m simply mad). Kate Voss does some wonderful stuff vocally here, playing with certain words, almost like scat.

I’ve said it several times, but you can never go wrong with Gershwin. Here, Sundae + Mr. Goesl offer an interesting rendition of “Embraceable You,” with Kate’s vocals accompanied by just guitar, giving it a sort of friendly, improvised air, an honest and passionate sound. And that isn’t the only Gershwin song to be included on this album. They also cover “‘S Wonderful” (which here is misspelled as “S’ Wonderful”), and this version features some playful backing vocals by Robb Davidson and Jason Goessl.

Sundae + Mr. Goessl deliver a wonderful rendition of “Caravan,” with a fast pace. I often forget that there are lyrics to this song, because usually it is performed as an instrumental. But there is an extended jam that is a total delight. I love that guitar! And does Kate Voss give a little nod to the Harlem Globetrotters Theme Song nearly halfway through on melodica? Sure sounds like it! That’s followed by “Bang Bang (My Baby Shot Me Down)” (here simply titled “Bang Bang”) a seriously cool song written by Sonny Bono and originally recorded by Cher. This song is now associated with “Kill Bill,” which used the Nancy Sinatra version, the version that Sundae + Mr. Goessl take some inspiration from for their version. This is a really good version. Kate’s vocals are both delicate and strong, and completely captivating. “A Wink And A Smile” was originally written for the film Sleepless In Seattle, but let’s not hold that against the song. The song can clearly exist outside that awful movie, as it does here. In fact, I would argue that if it took that movie to bring this song into existence, then it was worth it (though I never want to suffer through that damn movie again). This rendition features some adorable whistling, and just has a great vibe about it.

I have always loved “My Blue Heaven,” a song that has been delivered different ways over the years. I love the sweet renditions like that by Gene Austin, and the fast-paced versions like that by Fats Domino. This version by Sundae + Mr. Goessl opens with Kate’s vocals accompanied by just finger snaps before the guitar comes in. A baby becomes a puppy in this rendition (no problem, just don’t dress the dog like a baby). The CD concludes with a cool blues number, “Crescent City Blues,” the song that Johnny Cash basically ripped off for “Folsom Prison Blues” (I still love that Johnny Cash song, however; don’t get me wrong). Anyway, Kate can sure deliver the blues. There is also a nice lead part on guitar, with effective pauses. “I’d let that lonesome whistle blow my blues away.”

CD Track List
When You’re Smiling was released on March 6, 2018.
Posted by Michael Doherty at 1:43 PM