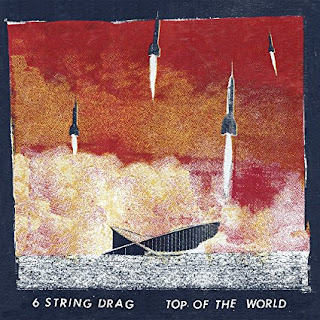 In January, 6 String Drag released a special 20th anniversary edition of High Hat (well, 21st anniversary, actually), on both CD and vinyl. It wasn’t too long after the original release of that excellent album that the band broke up. But they got back together a few years ago and released Roots Rock ‘N’ Roll. And now it seems the band is going strong again, with equal parts determination and joy, as made clear by the release of Top Of The World, a new album of original material written or co-written by singer and guitarist Ken Roby.  The band is made up of founding members Kenny Roby on vocals and guitar and Rob Keller on bass and backing vocals, along with recent additions Luis Rodriguez and Dan Davis. Rodriguez is on guitar, keys, trumpet, glockenspiel, and backing vocals; and Davis on drums and percussion. Joining them on this new album are John Ginty on organ and keyboard, Matt Douglas on saxophone, and Jason Merritt on guitar and backing vocals.

High Hat often sounded to me like some wonderful marriage between Uncle Tupelo and Elvis Costello, and the opening track of Top Of The World, “Never Turn My Back On You Again,” has a strong Elvis Costello sound, a wonderful, positive pop vibe and well defined characters and scenario. Here is a taste of the lyrics: “Is it because of the pills, babe/Or is it because the rent/But we wouldn’t be in the jam we were in/If you never turned your back on me again.” That’s followed by “Wrong Girl,” which has some elements of early 1960s rock and roll. Hmm, I wonder just who the woman in this song is, especially after lines like “Did he split your tongue/Do you still speak Slovenian” and “Oh, that imaginary place/Has been corrupted by the state.” “Wrong Girl” was written by Ken Roby, Rob Keller, Luis Rodriquez and Dan Davis.

“Small Town Punks” then has more of a driving rock feel, right from the beginning, even before the drums kick in. That guitar is enough to get things moving forward. And I love that brief moment after a verse, with that steady drumbeat and that great punk bass line. That’s really the part that makes me love this song. This one is a look back at youth. “Suddenly I fear/I’ll never ever ever get away from here/Wastin’ all my time/On runnin’ away from nothin’/But the back of my mind/But nothin’s easy to see/When you’re lookin’ back on it /With a small town punk like me.” And by the end, this one is really rocking. It is then followed by the album’s title track, “Top Of The World,” a mellower, thoughtful song that also looks back. It opens with this question: “How can we be empty/When we fill our time and space/With love and gin?” Approximately halfway through, it bursts through to another level with a pretty and moving instrumental section. “Top Of The World” was written by Ken Roby, Rob Keller, Luis Rodriquez and Dan Davis.

“Every Time She Walks On By” has a fun pop feel, with hand claps and all, and something of a 1980s thing. The lyrics even mention Madonna, and the first line seems to be a Cyndi Lauper reference: “Oh we bop fun.” “Let’s Fool Around ‘Til The End Of The World” has my favorite song title of all these tracks. And check out these lines: “Tell me about the battle/That went down in the church/Some heavy duty make-up/In a patriot’s purse.” And these: “And if buyin’ pretty dresses/Is the best they can do/Your family’s more a mess/Than the one you’re wed to.” Not bad, eh? I want to fool around with a particular woman until the end of the world; I only worry that the end will come too soon. The world is a serious mess, and people are bloody stupid.

“I Wish You Would” has a bright, cheerful rhythm, like a pop band invaded a country rock roadside bar and got everyone dancing. “I wish someone like you/Would help me break my heart for good.” And I appreciate this line from “Be Like You”: “Some kinds of Jesus/Are hard to chew.” The album ends with “Robert & Lucy,” a rockin’ number with something to say and a full sound, including horns. I’m definitely curious to see where this band goes from here.

CD Track List
Top Of The World is scheduled to be released on March 9, 2018 through Schoolkids Records.
Posted by Michael Doherty at 4:56 PM