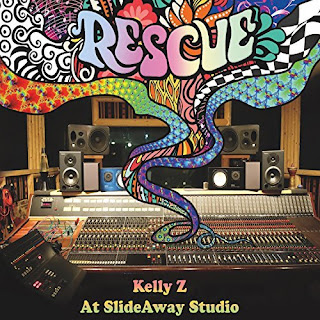 For more than two decades now, Kelly’s Lot has been pumping great original blues and rock music into Los Angeles. Now lead singer Kelly Zirbes, under the name Kelly Z, offers an album of covers, Rescue. These tracks were recorded in 2011 and, according to the note on the back of the album cover, left unfinished. This, of course, isn’t the first time Kelly has covered other artists’ material. There are quite a few covers on Pastrami & Jam, for example. But this record is something different. First of all, it’s not a Kelly’s Lot release, though of course Perry Robertson does play on it. This album features mostly a classic sound, complete with a horn section and back-up singers (including the excellent Teresa James).

The record kicks off with “What Do I Have To Do To Prove My Love To You,” here shortened to “What Do I Have To Do,” a great funky number written by James Brown and Marva Whitney, and originally recorded by Marva Whitney. This version by Kelly Zirbes has a classic sound, with raw energy, and is a whole lot of fun, with Kelly belting out those lyrics. And I dig those backing vocals. Even though it is a studio recording, it has a live feel. That’s followed by a good rendition of “Baby It’s You,” written by Burt Bacharach, Mack David and Barney Williams, and originally recorded by The Shirelles. This version by Kelly Z is much closer to that by Smith, who had a hit with it in 1969. I particularly like the work on horns here, and that cool (though brief) lead guitar part (that’s Perry Robertson on guitar).

Kelly then slows things down with “You Don’t Realize,” a wonderful song released by The Electric Flag in 1968, and written by Michael Bloomfield. This is an excellent rendition. Man, I love those horns. Roy Wiegand joins on trumpet on this track. It is Kelly’s vocal work that is the focus here, and at times it is absolutely gorgeous, while other times powerful. That’s followed by “It’s Gonna Work Out Fine.” Okay, the “Yes, dear” at the beginning caught me off guard and made me laugh out loud. It had been a while since I’d listened to the Ike & Tina Turner recording, and had forgotten about Ike’s part. (In that version, it was “Yes, Tina.”) Here Perry Robertson does that part, giving us his best Ike Turner. This is a playful number, and Kelly deliberately holds back here, which works well with the song. This version has an early sixties rock and roll sound, along the lines of the original, which was released in 1961, and then those backing vocals are wonderful.

Kelly Zirbes kicks off side 2 with another Ike & Tina Turner song, “Trying To Find My Mind” (though the lyric is “I’m trying to find my mind,” the tune was titled “I’m Looking For My Mind” on the Ike & Tina Turner records), a rockin’ tune that comes on strong. Kelly is certainly not holding back here, but letting loose, showing that great raw power her voice has. This track has a strong ‘70s rock song sound. Chuck Kavooras plays slide guitar on this one. I love when Kelly rips into a lyric, but I also appreciate when she finds those sweeter tones, as she does on Harlan Howard’s “He Called Me Baby,” particularly at the beginning. Of course, the sound builds from there, her voice rising especially as the horns do, which is wonderful. This rendition has more soul and is less country than most versions, and ends up being one of my favorite tracks. I dig that part on keys.

Then we get into some very cool funky soul with a rendition of Isaac Hayes’ “Do Your Thing.” I love that bass. This version has the sound and vibe of a great Stax recording. “If you feel like you want to scream/’Cause that’s your way of letting off steam/Scream on, scream on.”  I do, I do, nearly every day since November of 2016! This track features some cool work on guitar too. The album then concludes with an unusual take on Jimmie Davis’ “You Are My Sunshine.” She gives this delicious rendition a meaner vibe. And I love those bursts of horns. I don’t think you’ve heard a version quite like this before.

Side 1
Side 2
Rescue was released on CD on October 6, 2017, and on vinyl on January 18, 2018. Though it’s available on CD, I recommend getting it on vinyl. It just feels right to listen to this one on vinyl. You know? If you don’t have a record player, this is a good time to get one. After all, Record Store Day is this Saturday.
Posted by Michael Doherty at 7:30 PM