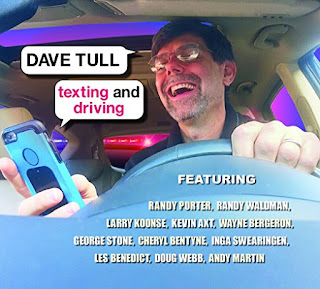 First off, I have to say that I am not a fan of using the word “text” as a verb, or in this case, I suppose, a gerund. Okay, enough about that. I also have to forgive Dave Tull for playing with Barbra Streisand on her recent tours (that dishonest woman should have been forced to stop performing back in 2000 when fans had to pay an extraordinary amount of money for tickets to what she promised was her final show). Okay, now I can relax and enjoy his new album, Texting And Driving, which features all original material, much of it with a delightfully humorous bent. Dave Tull, known for his drumming, here is both on the drum kit and providing lead vocals. He has a voice that is perfect for jazz standards, and that makes these original songs even more enjoyable. It’s like a singer went a bit whacky during a formal gig, veering far off from the agreed upon set list, and the band had no choice but to follow him and keep going. But it’s not like these are all humorous songs. Take “The Moment,” for example, which is a sweet, earnest duet. And he’s got a pretty talented group of musicians backing him, a group that includes Randy Porter on piano, Larry Koonse on guitar, Kevin Axt on bass, and Doug Webb on saxophone and clarinet, among others.

Dave Tull opens the album with “The Texting Song,” a wonderful big band song about the modern habit many people have of sharing every damn thing they do online, taking photos and posting constant updates on social media sites, assuming that the rest of us care. It is told from the perspective of someone who is suffering from a phone addiction, and the lyrics come rapidly, which is perfect for the subject. After all, people seem in a rush to post things, often not even proofreading (please proofread, people!). “I know I ought to pay attention to my driving/But another instant message is arriving/When my smart phone beckons I just got to reply/I can’t wait ten seconds, though I’ll probably die/In the auto wreck that happens next/I just got to send a text/I just can’t imagine doing anything at all without a phone in my hand.” There is even a bit of scat toward the end, though I’m not sure how one would send that in a text or a Facebook post. How do you spell that? The music is excellent, by the way. I particularly dig the bass line. And there is a wonderful lead part on piano halfway through. Randy Waldman plays piano on this track.

“Henrietta” has a classic, somewhat romantic sound, working in wonderful juxtaposition with the song’s first line, “I didn’t fall for Henrietta.” But that is just the beginning of the story. And love can creep up on you when you’re not expecting it. I really like these lines: “I didn’t see it at first glance/But fate gave me a second chance/To meet Henrietta and fall in love at first sight.” That’s followed by “The Moment,” which is performed as a duet with Inga Swearingen. I love the line, “But a silent heart only knows regret.” And it’s followed by the line, “Ever wondering what would she have said had I only asked her.”  Nice, right? There is some wonderful work on strings, this track featuring Brynn Albanese on violin, Peter Jandula-Clark on viola, and Ken Hustad on cello. Plus, there is a good lead section on flugelhorn by George Stone.

“Please Tell Me Your Name” opens with the sounds of an airport, and with a surprise meeting of an old band mate leading to the beginning of the song. He can’t recall the guy’s name, something I can relate to. I am terrible with names, so I can appreciate this song. Wayne Bergeron, Pete Olstad and Mike Gutierrez are on trumpet, and Andy Martin plays trombone on this track. Doug Webb provides the tenor saxophone solo. Dave Tull uses Wayne Bergeron’s name at the end, making me wonder if he did actually forget the trumpet player’s name at one point. “The Stoplight At The End Of The Street” is a fun song that, like the first track, involves someone using Twitter while driving. “I’ve watched a thousand fender benders go down right here at my feet/So spend just a minute of your day with the stoplight at the end of the street.” I really like the song’s groove, and there is also a seriously enjoyable lead on piano by Randy Porter. There is a bit of scat near the end. “You know the light changed like thirty seconds ago.”

“Watch Your Kid” is another track I really appreciate, and one that every parent (and every potential parent) should have to listen to, and pay close attention to. Here are the opening lines: “If you choose to have a baby, I wish you joy, but be aware/One important detail comes with that decision/When you let sperm and egg collide/You sign yourself up to provide/Eighteen years of nearly constant supervision.” (And, hey, text messages play a part in this one too: “While you text and pick out groceries/He careens about the store.”) George Stone is on trumpet, and Dave Becker plays saxophone on this track.

“The Date” has a delightful, adorable, playful vibe, and is presented as a duet with Cheryl Bentyne, though she doesn’t come in until nearly two minutes into the song. First we get the male perspective on the date, and then the female perspective, which – perhaps not surprisingly – is somewhat different. This song follows my theory that when it comes to relations, men are stupid and women are insane. Toward the end, they simultaneously sing their perspectives, without listening to each other, which is perfect, don’t you think? Another sort of date is described in “Clapping On One And Three,” in which Dave Tull sings “She talks right over the band, but then her kiss makes my concern just disappear.” I think a lot of us that love music have been in that situation at one point or another. The CD concludes with “Fly By The Seat Of My Pants,” a groovy tune about remaining spontaneous and avoiding plans. “Some people feel they’ve got to plan up every minute/But it makes ‘em go through life in a trance/I say that life is a wheel and every day I want to spin it/I like to fly by the seat of my pants.”

CD Track List
Texting And Driving was released on March 16, 2018 on Toy Car Records.
Posted by Michael Doherty at 6:45 PM