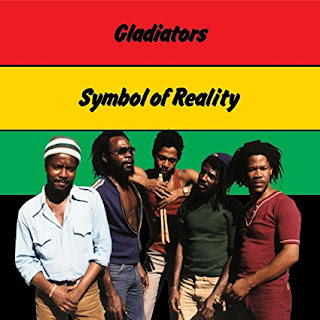 In these twisted days, my musical needs are great. Music is what is keeping us sane, isn’t it? And sometimes nothing works better than some good reggae. Omnivore Recordings is re-issuing a couple of 1980s albums from The Gladiators, Symbol Of Reality and Serious Thing. Symbol Of Reality, featuring mostly original material written by lead vocalist and rhythm guitarist Albert Griffiths, was originally released in 1982. The new re-issue includes several bonus tracks. Interestingly, most of the bonus tracks are sprinkled throughout the CD rather than all placed at the end. Alternate versions of songs are included directly after the album versions, and simply have the word “Version” added to the titles. A couple of these tracks were previously included on an earlier CD release of this album, while the rest were previously unreleased. Liner notes by Leroy Jodie Pierson are included in the new CD. By the way, you might notice a difference in the cover from the original release. The “The” is missing from “The Gladiators.”

Symbol Of Reality opens with its title track, a good tune with an easygoing reggae beat. “Where there is reality, there is dignity/Look at the Rastaman, he is the true messiah.” I’m not into the religious aspects of reggae music, but that doesn’t keep me from enjoying the music. It’s followed by another version of this song, titled “Symbol Version.” The bass and percussion are given more prominence in this version, and I dig it. What’s strange is that a lot of the vocals are missing from this version, focusing on the music. This track was also included as a bonus track on the 1997 CD release of Symbol Of Reality.

There are only two covers on Symbol Of Reality, and both are Bob Marley songs. The first, “Small Axe,” eases in before then kicking in with a wonderful, cheerful vibe. Light up and dance around your home, and you’ll be feeling good in no time. “If you are a big tree/Let me tell you that I am the small axe/Ready to cut you down, ready to cut you down.” Yes, these are lines we should sing to Donald Trump and his gang. The song “Cheater” also makes me think of Donald Trump (I really can’t wait for this administration to be buried out in the desert), with the lines, “A girl like you is a big disgrace/’Cause only when you see money, your eyes begin to shine.” Yeah, it’s about a girl, but whatever. The Gladiators also cover Marley’s “Stand Alone” on this album.

“Bumping And Boring” is a total delight, which you might expect from its playful title. I love the backing vocals echoing the end of the lines, reminding me of certain 1960s pop songs (particularly “She Hangs Out” by The Monkees). Here is a taste of the lyrics: “Well, you don’t know what you want in life (want in life, want in life)/I said, you don’t know what you’re looking for (looking for, looking for)/Always talkin’ about the past (not the present, not the present)/That’s why you’re always bumping and boring (bumping and boring, bumping and boring).” This is one of my personal favorites. Another highlight is “Watch Out,” again in part because of the way the backing vocals are used. But there is something about the overall vibe that I really like. “He who have ears will hear/He who have tongue will tell/He who have eyes will see/What you sow is what you shall reap.”

“Streets Of Gold” is another highlight. It is so sad that these anti-discrimination songs, these songs about standing up for your rights are still needed. “If I am wrong, be not afraid to say so/Is there any difference between black and white?/Oh no/We are all of one skin, same blood, same soul.” This CD also includes an alternate version, which was previously unreleased. Like the other version of “Symbol Of Reality,” this track has the vocals cutting out at points to focus on the beat, so not all of the lyrics are present in this version. “Righteous Man” contains a play on the phrase “love and understanding,” with them singing, “love and overstanding.” I like the work on keys. There is also an alternate version, which was included as a bonus track on the 1997 release of this CD.

The original album concluded with “Not Afraid To Fight,” a positive tune that opens with these lines: “I won’t give up, hey, I won’t give up this fight/Said I’m not running away from reality/I’m not afraid, hey, to fight for what is right.” It is interesting to me that the album opens and closes with songs that mention reality in their first lines. Maybe that’s because reality is something I don’t want to have much to do with these days. On this disc, this track is followed by a different version, previously unreleased. This version is nearly an instrumental, focusing on the rhythm, with only the first two lines of each verse being heard. The CD then ends with a couple of instrumental tracks, both of which were previously unreleased – “Symbol Of Reality” and “Streets Of Gold.”

CD Track List
This special expanded re-issue of Symbol Of Reality is scheduled to be released on April 20, 2018 (hmm, that seems the perfect date, doesn’t it?).
Posted by Michael Doherty at 8:23 PM