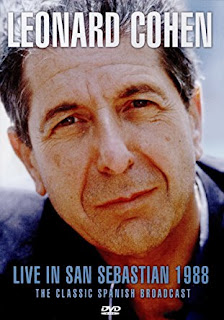 The year 2016 was an absolutely atrocious and abysmal year. A year that could give Donald Trump the presidency and take Leonard Cohen from us – and that was actually in the same week – is a foul year indeed. Fortunately, we still have all the excellent music that Leonard Cohen recorded, and we’re getting new releases of some live recordings too, including this filmed concert from May 20, 1988. Until God takes Steve Poltz up on his splendid offer (listen to “Hey God I’ll Trade You Donald Trump For Leonard Cohen”), these releases will have to suffice. As Leonard Cohen tells us in “Tower Of Song,” “But you’ll be hearing from me, baby, long after I’m gone.” And what a treat it is to be able to watch this concert, which was originally broadcast on television. Apart from a couple of minor glitches near the beginning because of the source material, the picture is pretty good. And the sound is fine. The music, of course, is fantastic.

As he did at every concert of his that I attended, Leonard Cohen opens with “Dance Me To The End Of Love.” And look at that smile as Julie Christensen and Perla Batalla sing at the beginning. I’m always struck by how giving Leonard Cohen was. I experienced that myself the one time I met him, and you can see it here in the way he focuses his attention (and his joy) on his fellow musicians, such as on Bob Furgo when he takes the lead on violin. He follows that with “Ain’t No Cure For Love,” from what was at the time his new album, I’m Your Man. And this is a really good rendition. I love the moment when Leonard Cohen steps between Julie and Perla near the end. He then straps on his acoustic guitar for “Who By Fire,” which features a beautiful instrumental introduction. This is a pretty and gentle performance of the song, and it’s followed by a passionate “Bird On The Wire.”

Leonard Cohen plays guitar on “Avalanche,” which he performs solo. I do wish the camera would pull back slightly so we could see his finger work on the guitar. The concert is presented in a widescreen aspect ratio, and I wonder if in making it widescreen we’re actually losing the bottom of the frame. Because there are several shots that seem odd, like the camera needs to pan down slightly or pull back just a bit, and that would provide an explanation for those shots. Because overall the show is shot really well, with the camera basically always where you would want it to be.

Leonard Cohen introduces “Chelsea Hotel No. 2,” saying “This is a song that I wrote a thousand years ago for Janis Joplin at the Chelsea Hotel.” Perla translates this introduction into Spanish for the audience. Leonard plays guitar on this one too. He gives a little laugh on the line, “But for me you’d make an exception.” He plays keyboard on “Tower Of Song.” There is no audible crowd reaction to the “golden voice” line, perhaps because the song was still quite new at the time. That’s followed by “Sisters Of Mercy” and then a really good rendition of “One Of Us Cannot Be Wrong” – so good, in fact, that it was chosen to be included on the 1994 release Cohen Live.

In the introduction to “First We Take Manhattan,” Leonard Cohen tells the audience they’ve been warm and kind, but that their kindness would “not divert me from my appointed task, which is first to take Manhattan and then Berlin and several other cities and do with them as I will.” (Perla does not translate this time.) Stephen Zirkel plays trumpet at the beginning. You can see the sweat dripping down the side of Leonard’s face during this song. “First We Take Manhattan” must be the last song of the first set, but Leonard gives the audience a salute as if it’s the end of the show. It’s difficult to tell because the song comes to a sudden ending. I feel like we’re missing the last moments of it, moments that might indicate if they’re taking a set break. (I’m not certain that we’re getting the complete concert. There are moments when I feel something is cut, and this concert is not quite two hours, significantly shorter than the shows I saw him do.)

He is then back, introducing “Everybody Knows,” also from I’m Your Man. It sounds like he sings “Everybody knows this broken feeling” rather than “Everybody’s got this broken feeling.” And this version includes some different lyrics: “Everybody knows that Jesus was born/In Bethlehem without a single dime/Everybody knows that the homeless people/Could be themselves some other time.” Those lines lead to “Everybody knows the deal is rotten.” I don’t recall hearing him sing those lines before. But it is during “Hallelujah” that the most significant changes come. This concert was only four years after the release of Various Positions, the album containing the studio version of “Hallelujah,” and in that time he had completely rewritten the song. This version has no verses in common with the studio recording. And this version has only three different verses, with the first then being repeated at the end. These verses will be familiar to those who saw him in concert later on, but there are still some other changes within those verses. He begins with the “Baby, I’ve been here before” verse, which is the one with the line “But love is not some kind of victory march.” He follow that with the “There was a time when you let me know/What’s really going on below” verse. The third verse is the “Maybe there’s a god above” verse. However, in this verse he sings “Not the abandoned laughter of someone who claims to have seen the light” rather than “It’s not some pilgrim who claims to have seen the light.” (“Pilgrim” was sometimes replaced with “fool.”) He then repeats the first verse, changing “broken” to “lonely” this time. You can hear a somewhat similar rendition on Cohen Live, which was recorded on the same 1988 tour, though several months later (though that version does not include the repetition of a verse, but rather the final verse from the studio album version). Anyway, it’s a wonderful rendition.

During “Take This Waltz,” at one point he sings “dragging its ass in the sea” instead of “tail.” Julie Christensen is excellent on this song, and I also love the trumpet. It appears that this song ends the second set, as Leonard Cohen walks off before the song ends. In that case, there must be songs missing from this DVD, because the second set contains only four songs. There is a shot of the audience, and then Leonard Cohen is back with “The Partisan,” followed by “Suzanne” and “Heart With No Companion.” Leonard Cohen walks off again at the end of “Heart With No Companion,” and this time we see the band leave too. They come back for “Coming Back To You,” which is one of my favorites. This is a passionate rendition, and it is followed by “I Can’t Forget.” The show then concludes with an unusual version of “So Long, Marianne,” with an added vocal section by Perla and Julie at the end.

Leonard Cohen: Live In San Sebastian 1988 was released on DVD on April 7, 2017. The DVD contains no special features. Apparently, an interview with Leonard Cohen was recorded for the original broadcast, but that is not included here. The DVD is approximately 107 minutes. The scant closing credits do not even include the band members or song titles.
Posted by Michael Doherty at 3:32 PM