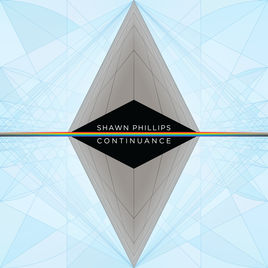 Shawn Phillips has been having a pretty noteworthy career, from his early work with Donovan and his two dozen or so solo albums. His music has elements of rock and roll, folk, jazz, hard rock, progressive rock and even classical. While you might hear such influences and elements on his new album, Continuance, Shawn Phillips really has his own sound, and seems to let his music follow its own direction. Joining him on this release are Brockett Parsons on keys, Anthony Crawford on bass, Sebastian Persini on drums, Danny Janklow on saxophone, and Josh Seguin on lead guitar. And, according to Shawn in the CD’s liner notes, the musicians recorded this album live in the studio, with everyone in the same room, playing together, without much rehearsal, in order to capture the magic as it happened. So this is an album that came from improvisation, and with very few takes, and it consequently has a certain undeniable energy. It’s also kind of amazing, because these aren’t simple songs. Many of the tracks run directly from one to the next without pause. All of the songs are originals, written or co-written by Shawn Phillips, and they feature some good lyrics. For example, check out these lines from “In Grace We Intend”: “At the heart of the matter is avarice and greed/Enacted by people this world doesn’t need.” Guess which people I think of when I hear those lines? (If you guessed anyone in the Trump regime, anyone at all, you are correct.)

The CD’s first track, “Life,” opens with some crowd sounds, and a bit of Sousa’s “The Liberty Bell.” Okay, I know that “The Liberty Bell” existed before Monty Python used it, but as far as I’m concerned it is just the Monty Python’s Flying Circus theme song, and whatever came before is of no importance. Anyway, we get just a bit of that before this song begins in earnest. It’s a cool track, an introduction to what will follow, referring to it as “the show of shows” and mentioning that “the stage is set.” So is it an admission of artifice? Perhaps, but it seems that it is also in line with Jaques’ famous speech from As You Like It, that all the world’s a stage. And this track invites us to take part, like a barker for the carnival of life. The vocal line has a good rhythm. Check out these lines: “And the world keeps turning, live are churning, loving and killing are part of this burning/The best and the worst they make this scale, we haven’t realized we are so frail.” I love that moment when the saxophone suddenly comes in.

“Life” leads straight into “The Force That We Call Life,” a short, somewhat pretty tune featuring an orchestral arrangement by Paul Buckmaster. That, in turns, leads straight into “Tribute To D,” an instrumental rock track that features some nice work on saxophone. The sax becomes a part of the atmospheric rock sounds, until the end, when it rises above the other instruments. This track fades out. Then “Man With A Gun” opens with a thumping hard rock force. The gun problem is more serious than ever, and yet some folks still want to blame everything but the easy availability of the guns themselves (someone really ought to smack Ted Nugent across the face). If those pro-gun people become the victims of gun violence themselves, perhaps they will change their horrible, indefensible stance. Anyway, this song has a serious, intense tone. “Like the sunlight in a day, he will never go away/He is holding onto all his power/And in the hour of your need, he is only feeling greed/And he simply wants to see you cower.” I hope the line “You know that without fail, they will never go to jail” will prove incorrect. How is Donald Trump not already spending his life in prison?

Henry David Thoreau wrote, “The mass of men lead lives of quiet desperation.” What a lot of us feel these days is something more like “Furious Desperation,” which is the title of one of my personal favorite tracks on this CD. “Furious Desperation” begins with a good beat and a snippet of a speech from Bernie Sanders. When Shawn’s vocals come in, the lyrics are delivered almost like beat poetry over the beat. Halfway through, a very cool bass line comes in, and then there is some delicious and kind of funky work on keys. Check out these lines: “No insurance, county’s full, the ambulance is transportation/To take you on those useless rounds, in furious desperation.” Not bad, eh? “Don’t look to god or devil now, for both of them are taken/This is the earth for all us folks, it’s not yet all forsaken/Just wake up to priorities, forget the conflagration.”

“C’mon Round” has more of a fun, cheerful, optimistic sound and vibe, with something of a country feel, and is another of the disc’s highlights. This is one that I like more and more. “Ain’t nobody here immortal; if you’re hearin’ this, you’re alive.” Jonathan McEuen plays guitar on this track. “Bach To The Fusion” features some beautiful work on guitar. Settle in and let this track transport you. I love the mix of electronic and acoustic sounds, a combining of worlds. This is another of my favorites. “Dancing In Survival,” which has my favorite title of the album, takes us on a ride too, particularly in the instrumental section in its second half. The album concludes with “Some Things Will Never Change,” an idea that frightens me. We need some serious change, and we need it immediately, beginning with the absolute and total destruction of the entire Trump regime. Not one of them should be left in a position of power. Trump has surrounded him with the absolute worst that humanity has to offer, which makes sense, as a guy like Donald isn’t going to attract decent or intelligent people. Anyway, the track begins with the eerie sound of winds across what is perhaps a desolate landscape. The lyrics are delivered as spoken word, as poetry over gentle music. “Through the wonders of perception, we question time and space/We grapple with the issues, but never that of grace/In seeking God we kill ourselves, I find this so deranged/But in the order of this chaos, some things will never change.”

CD Track List
Continuance was released digitally on January 31, 2018, and is now available on CD.
Posted by Michael Doherty at 5:07 PM