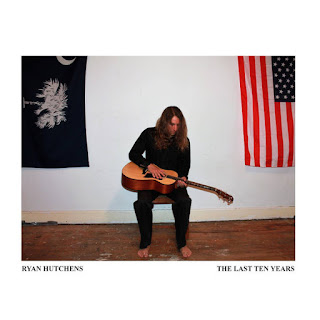 The world is crazy, and seeming to get crazier at a rapid, dizzying pace that one can hardly keep up with. Sometimes what we need is to calm down, to give ourselves a break, so that we don’t explode. The music on Ryan Hutchens’ new album, The Last Ten Years, is the perfect vehicle to take our thoughts elsewhere. Many of these tracks have a beautiful, calming effect. Not that they’re dull or anything; far from it. But they seem to work to refocus our thoughts, at least for a time, giving us a much needed break, shutting out the news, creating a space where those things don’t exist, or at least don’t matter as much. That is achieved in part because these songs are emotionally engaging. This album contains all original material, written by Ryan Hutchens. Ryan plays several instruments on this release, including acoustic guitar, electric guitar, bass, banjo and percussion. Joining him are Kenny McWilliams on piano, synthesizer, guitar, bass and percussion; Idris Chandler on cello; and Travis Wright on pedal steel guitar. The Last Ten Years is the second album that Ryan Hutchens has released under his own name. Earlier he released CDs under the name Cancellieri, and on this new album he revisits a couple of songs from the Cancellieri album 46 And Raleigh.

The album opens with “Green My Eyes,” which has a beautiful, very pleasing folk sound. The song features some seriously good lyrics. “You said that life has been a mess/It’s been a crazy year/You’d like to get things off your chest/I probably wouldn’t care/To hear about the times you cried or where you spent your nights/Pretty mouth and green my eyes, there’s nothing left to try.” That’s followed by the album’s title track, “The Last Ten Years,” which has a gentle, comforting folk sound, which works well with the song’s lyrics. Check out these lines: “If you’re struggling with a troubled mind you should know I’ve been there before/Spent the better part of the last ten years just knocking on your door.” This track features Idris Chandler on cello, an instrument I am always happy to hear. Something about its sound never fails to move me, and it is effective here. And the line “If that Boston cold makes you feel alone, you can keep your love with mine” hits home with me, as my girlfriend is currently in that city, so far from me. This is a gorgeous song, one of my personal favorites.

“Education” is a song that Ryan Hutchens included on the Cancellieri album 46 And Raleigh, and he revisits it on this album. This one too has a calming effect. The approach is gentle and pretty, and I feel I can succumb to its sound, ease myself into warm, dark waters. You know? At the end, Ryan repeats, “Let me sleep/Let me sleep/Let me sleep.” Then “New Remedy” is more in the country realm, with the presence of pedal steel. Travis Wright’s work on that instrument is beautiful. This one too features some really good lyrics, such as these lines: “Spending all of my time coming up with new plans to make a living and get some rest/I wish a warning had come with this ache in my chest/But walking alone beats working to death for a person.”

Idris Chandler again joins Ryan Hutchens on cello for “Fortunate Peace.” “So tell me more about your writing and the way your family’s strange/Tell me anything you like, girl, in the end I can’t stay.” After those lines, there is a moment where it feels like the song is ending, and then the tone changes, the song taking on a happier feel. “The Landing” has a cheerful vibe and is another of my favorites. It has a country sound, and some excellent lyrics. Check out these lines: “But all I’ve learned I’ve soon learned how to forget/’Cause I’ve stood on top of castles/Yeah, I’ve slept on top of graves/Nothing lasts forever/The worms will have their way.” Not bad, eh? This is one I love more and more, the more I get into it. There is wisdom, there is experience, there is acceptance in his voice, in his delivery, in these thoughts. Travis Wright plays pedal steel on this track. On “The Trouble With You,” Ryan Hutchens performs solo, just vocals and acoustic guitar, giving the song a simple, but wonderful folk sound. “I only ever told the truth/I only loved the thought of you/I could leave it/I could take it/It all seems a little fake.” The album then ends with an instrumental track titled “Instrumental In C,” a pretty tune that is delivered just on guitars.