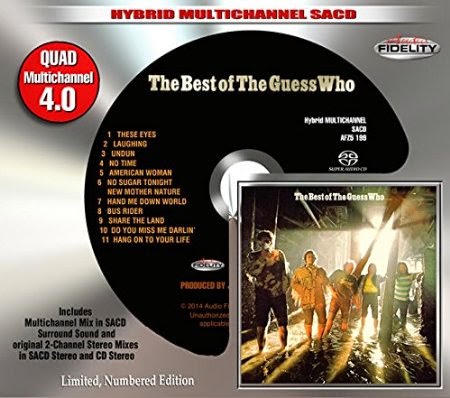 The Best Of The Guess Who is an album I’ve now owned three times – first on cassette when I was a child, then on CD, and now on the new limited edition hybrid multichannel SACD surround sound disc. It’s an album that I’ve always loved, and one I’ve never tired of. And with this new limited, numbered edition, these tracks sound as good as, or better than ever before. The sound still isn’t perfect, as you can tell immediately at the beginning of “These Eyes,” but overall the sound is as good as it gets. And these are excellent songs. Also, a small pink-and-black fold-out poster is included, something that was not included in either of the other two editions of this album that I’ve owned.

“These Eyes,” the CD’s lead track, was a big hit for the group, both in the United States and in Canada, and it’s a good tune, but I’ve always preferred the following track, “Laughing.” “Laughing” reached #1 in Canada, and #10 on the U.S. chart. Both of these songs were written by Randy Bachman and Burton Cummings. A highlight of “Laughing” for me is when Cummings sings, “And now the best years – the best years have come and gone.” So good.

“Undun” has that great jazzy feel, and I love the doom told in these lines: “She found a mountain that was far too high/And when she found out she couldn’t fly/Mama, it was too late.” “Undun” was written by Randy Bachman, and was included as the flip side of “Laughing” before being released as a single itself.

“No Time” was always another favorite of mine. This one reached #1 in Canada and #5 in the United States. I always liked the casual cruelness of the lines, “No time for a summer friend/No time for the love you send/Seasons change and so did I/You need not wonder why/You need not wonder why/There's no time left for you.” “American Woman” is probably the band’s most well-known tune. My favorite part is the cool, bluesy opening. By the way, I cannot stand the Lenny Kravitz version; it is awful and tedious. So if that’s the only version you know, do yourself a favor and listen to the original Guess Who version.

My all-time favorite Guess Who song is actually two songs: “No Sugar Tonight/New Mother Nature.” It has such a good groove and a lot of energy and interesting changes. I remember this was the track that made owning this album a necessity when I was a kid, and I still enjoy dancing around to it. “Hand Me Down World” also has a great energy, and was written by Kurt Winter. The lines that always kind of made me laugh are “Anybody here see the fuzzy-wuzzy loving cup explosion?/I think we missed it.”

“Share The Land” is another strong track, released as a single and as the title track of a 1970 LP. And actually tracks from that LP make up the entire second side of The Best Of The Guess Who, including the pretty “Do You Miss Me Darlin’” and the excellent “Hang On To Your Life.” For some reason, I always forget about the ending to “Hang On To Your Life,” and it surprises me.

CD Track List
This limited, numbered edition of The Best Of The Guess Who was released on March 10, 2015 through Audio Fidelity.
Posted by Michael Doherty at 3:34 PM