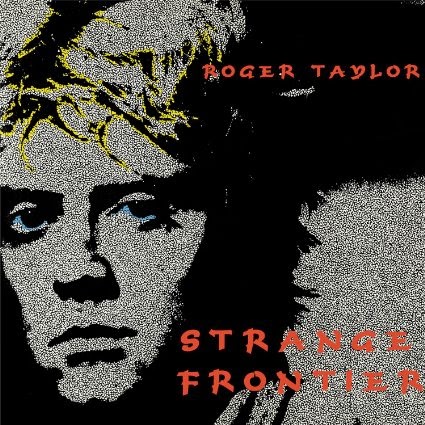 Omnivore Recordings is re-issuing the first two solo albums by Queen drummer Roger Taylor, with bonus tracks. Strange Frontier, his second album, was originally released in 1984, just after Queen’s The Works, an album that included the hit “Radio Ga Ga,” which Roger Taylor wrote. It was clearly a creative period for him. Roger Taylor plays most of the instruments on this album, as on his first release, Fun In Space. But on this one he does get a bit of help from his fellow Queen bandmates, with Freddie Mercury providing some vocals on “Killing Time.” And unlike his first album, this one features a couple of cover tunes. This re-issue includes liner notes by Greg Brooks (along with a short note from Roger Taylor), and the song lyrics.

The album kicks off with its title track, one of its strongest songs and one included on last year’s compilation Best. I love his vocal approach to this song, beginning with a softer, more intimate tone as he sings, “We’re off the tracks/We’re off the lines/You and me seen better times/Now we’re on the borderline/And I wish I wasn’t here.” The song then bursts open, and his voice takes on more passion on the lines, “Freedom fighters/Come and go/Bloody - righteous/And mentally slow.” This song is still quite powerful, and it really raises the spectre of those awful Reagan years when we were all taught to be afraid.

It’s followed by the surprisingly pretty “Beautiful Dreams,” a song also included on Best. This one at first feels almost like a lullaby, or a wistful look back to childhood, but then takes some interesting turns, mentioning “chemical dreams” and then “Colourful dreams we have at night/Nuclear purity/This is the final twilight.”

“Abandonfire” has more of a pop dance feel, yet just as you’re starting to dance around, the lyrics give you pause: “Abandon hope who enter here/Land of hopelessness and fear/A band of gypsies, a band of gold/Won’t save your hide, won’t save your soul.” Certain songs of the 1980s did this so well – making your body move while hitting with you some pretty serious lyrics.

Roger Taylor does two covers on Strange Frontier, the first being Bruce Springsteen’s “Racing In The Street,” a song originally included on his 1978 record Darkness On The Edge Of Town. It might seem like an odd choice, but it fits with the general mood of this album, with lines like “But now there’s wrinkles ‘round my baby’s eyes/And she cries herself to sleep at night/When I come home, the house is dark.”

The second cover is Bob Dylan’s “Masters Of War,” from his The Freewheelin’ Bob Dylan. Considering the time Strange Frontier was recorded, and what was happening, this cover is less surprising, and completely apt. But what is surprising is what Roger Taylor does with this song. He takes a folk song of anger (with none-too-subtle lyrics: “And I hope that you die/And your death will come soon”), and creates a haunting electronic atmosphere that is kind of frightening.

This special re-issue includes five bonus tracks. The first is an extended version of “Man On Fire,” which was originally released on a promotional record in 1984. It opens with a percussion section that I totally dig, and the song slowly but surely builds from there. It’s nearly two minutes before the vocals come in. That longer introduction really helps, and I actually prefer this version.

The bonus tracks include two versions of “I Cry For You,” the first being the single remix from the British single. The second is an extended remix, which was released on a 12” UK single in 1984. The other two bonus tracks – an extended remix of “Strange Frontier” and “Two Sharp Pencils (Get Bad)” – are also from that same 12” release. The extended remix of “Strange Frontier” is the longest track on this CD, coming in at nearly nine minutes, and it includes a drum solo near the beginning. “Two Sharp Pencils (Get Bad)” is an odd and kind of delightful pop song. Check out these lyrics: “Got stung on the knee by a wasp/When asked if it hurt, said no not a bit/He can do it again if he wants to.”

CD Track List
This special re-issue of Strange Frontier was released on CD on March 24, 2015 through Omnivore Recordings. This album will also be released on red vinyl.
Posted by Michael Doherty at 2:31 PM