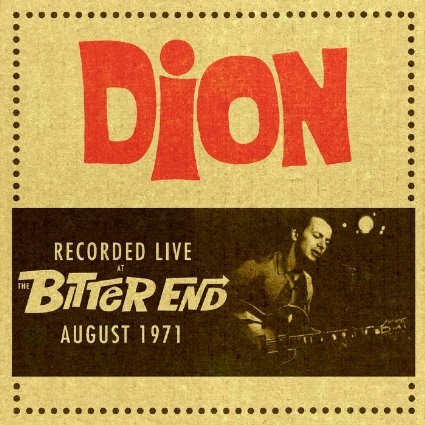 Dion DiMucci’s career is so interesting. He started with Dion And The Belmonts in the late 1950s, with hits like “Teenager In Love” and “I Wonder Why.” Then as a solo artist in the early 1960s, he had a string of giant rock and roll hits – songs like “Runaround Sue” and “The Wanderer.” And then the late 1960s saw a big change in his sound and material, and he had a hit with “Abraham, Martin And John,” which had more of a folk feel. In 1971, when the tracks on Recorded Live At The Bitter End August 1971 were recorded, he had dipped into the blues, while also continuing in the folk realm. He did a residency at The Bitter End, performing solo with an acoustic guitar, and a few tracks from those dates were included on his album Sanctuary. Now this new live album, put out by Omnivore Recordings, includes seventeen tracks, giving us a great feel for what Dion was doing at that time, and what his live performances were like. These tracks include some original material, as well as covers of songs by Bob Dylan, Leonard Cohen and The Beatles. The CD includes liner notes by Dean Rudland, with material taken from an interview with Dion DiMucci conducted in November of 2014.

The CD opens with a Dylan cover, “Mama, You’ve Been On My Mind.” Dion's vocal delivery is earnest and passionate. He follows that with “Brand New Morning,” an original tune which was included as the flip side to his single of “Sanctuary.” This song is quite short – he even says so at the end of it – but his vocal delivery has so much power and emotion that it is for me one of the highlights of the disc. There is not a whole lot of stage banter on these tracks, but at the beginning of “Too Much Monkey Business” he talks a bit of his experience as a rock and roll artist and a bit about Chuck Berry. And he jokes, “I usually do choreography with this tune, you know.” He stresses the blues aspects of this song, pulling back from the rock and roll of the original.

He also does a couple of excellent blues covers – Sam Hopkins’ “You Better Watch Yourself” (with the line, “You better stop drinking that wine, Sonny Boy”) and then Sonny Boy Williamson’s “Don’t Start Me Talking.” He does such a great job with the blues.

And of course he performs “Abraham, Martin And John” (joking as he starts it, “It was in tune when I bought it” – I wonder who first used that line), and the audience applauds once they recognize the song. It’s a really nice version, and he includes a little nod to “Will The Circle Be Unbroken” before the Martin verse. “Abraham, Martin And John” was written by Dick Holler, who also co-wrote “Sanctuary” with Don Burnham.

He does a fairly good rendition of The Beatles’ “Blackbird,” though I’m not sure about his whistling at the end. (Around the time of this recording, he also recorded a cover of “Let It Be.”) I have mixed feelings about his cover of Leonard Cohen’s “Sisters Of Mercy,” but that might be because that is one of my favorite songs, and some of the slight pauses throw me. He doesn’t repeat the song’s final line, “We weren’t lovers like that and besides it would still be all right.” And then he says, “Sure” at the close, which I don’t like, for it’s like he’s commenting on the song.

“Your Own Back Yard” is an original song that has a very personal feel, being about troubles with drugs and excessive drinking, with lines like “I lost everything near and dear to me” and “My idea of having a good time/Was sitting with my head between my knees.” In the CD’s liner notes Dion talks a bit about getting sober in 1968. This song was released as a single in 1970. He does several other original tunes, including “Sunshine Lady,” which features a humorous introduction (“I really got into this tune, I was singing it, man, for god-knows-how long… this is the short version”). It’s a totally delightful song. I’m also fond of “Sunniland,” which was released as a single, and “Harmony Sound.”

And if you were wondering, the answer is yes, he does a couple of his early rock and roll numbers: “The Wanderer” and “Ruby Baby.” In his introduction to “The Wanderer,” Dion says, “It's not to be taken too seriously.” This is a cool, slow, bluesy rendition. “Ruby Baby” already had a blues thing at its base, and so this blues version is close to the original, and Dion is clearly having fun with it.

CD Track List
Recorded Live At The Bitter End August 1971 is scheduled to be released on April 7, 2015 through Omnivore Recordings.
Posted by Michael Doherty at 3:15 PM