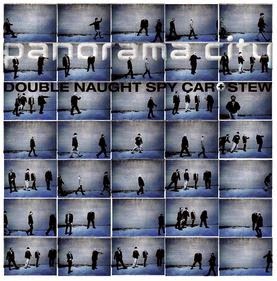 Panorama City, the new album by Double Naught Spy Car & Stew, was improvised in the studio, according to a note on the CD case, without rehearsals and without any second takes. This is certainly the band that can pull off this sort of thing and come out the other side with some great material. Double Naught Spy Car includes Paul Lacques on guitar and dobro (you might know him also from his work in I See Hawks In L.A.), Marcus Watkins on guitar (he’s played with Nina Hagen and has his own group, The Marcus Watkins Sintet), Marc Doten on bass and keyboards (he’s played with Shelby Lynn and Dave Alvin, among others), and Joe Berardi on drums (you might know him from his work with The Fibonaccis and Non Credo, and he’s played with Donovan and Ann Magnuson). And of course Stew is known for his work with The Negro Problem, as well as for the musical Passing Strange. Sure, some of the music is a little nutty and sometimes gets just a bit repetitive and messy. But that’s the nature of the experiment, and I sometimes prefer the realness of something messy over the contrived feel of more polished music. This is an album that I dug the first time I listened, but which I appreciate more and more. There is a lot to sink your teeth into here.

“Chat Noir” has kind of an odd, dark feel, particularly at the beginning, but also mentions K-Mart in its lyrics, so you know not to get too carried away by its tone. “Sweet Jackie’s Revenge” is a more interesting track, with a spoken word style that actually calls to mind at times some of the louder work of King Missile. Yes, seriously. There is also a kind of beat thing happening here that is fantastic. But figuring out where to come in with your finger-snaps might be difficult – and unnecessary, as the band is filling out the poetry with inspired sounds. There is some seriously cool work on guitar on this track.

But my favorite track is “Blue Dust,” with its slow, delicious acoustic vibes. Like a country song twisted around a bluesman’s bloody arm. And with great and surprising lines like “She’s an uncharted member of the upper crust” and “She says she’s just waiting for that train to rust.” Improvised? Wow. Just fucking wow. And I dig what Joe Berardi is doing on drums. Basically, I love this song.

“Bodhi Tree Mama” quickly develops a very cool groove, and they play with it for a couple of minutes before Stew comes in on vocals. This is such an unusual song, because it simultaneously feels like a bit of funk and a meditation. You could move to it, or sit with it, and be very happy either way. It’s followed by “Bumpin’ Morton Subotnick,” which opens with the question, “Is Moorpark a boulevard or avenue?” (The answer, by the way, is – surprisingly – “street.” Moorpark Street is located in the San Fernando Valley.) Stew asks the rest of the band while they begin another excellent groove. You can’t really hear the answer, if there is one, and Stew gives up and sings the first line of the song, “Cruising Moorpark,” leaving a gap after “Moorpark” where “Avenue” or “Boulevard” or “Street” would be. This song has a great sense of humor, with lines like “Don’t tell me it’s the wrong approach/I’m Morgan Freeman and you’re the acting coach” and “Tuesday night in Tarzana, what the hell did I expect?” I love what Stew does vocally on this track. This is another highlight for me.

“President” has more of a straight rock flavor, but with some less-than-usual lyrics. “Behind My Green Door” is a groovier tune and again with some unusual lyrics. “Keep the torture chamber tidy/Bring the homegrown from the hills/Call the lawyer nightly.” There is also a cool drum solo midway through. The album then concludes with “Blowoff Therapy,” which has more of a trippy vibe which I like.

CD Track List
Panorama City is scheduled to be released on April 14, 2015 on 11 Foot Pole Records.
Posted by Michael Doherty at 10:49 PM