The Magical Mystery Psych Out: A Tribute To The Beatles (2015) CD Review 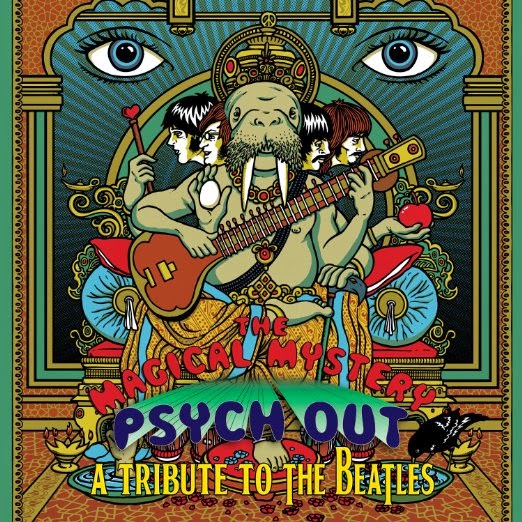 January saw the release of Stoned: A Psych Tribute To The Rolling Stones, and so of course it’s only fitting that The Beatles get a similar tribute. The Magical Mystery Psych Out: A Tribute To The Beatles focuses on the psychedelic elements of the band’s music, and is perhaps even better than the Rolling Stones tribute album. There is an interesting selection of compositions. You might think a compilation like this would focus on Sgt. Pepper’s Lonely Hearts Club Band, but there are actually no tracks from that album. I’ve always preferred Revolver anyway, and this tribute includes a few selections from that album, as well as a few from The Beatles (known forever as The White Album).

This CD kicks off with Electric Moon’s version of “Tomorrow Never Knows,” the perfect song to open a psychedelic tribute to The Beatles. This is one that the Grateful Dead covered in their later years, pairing it with The Who’s “Baba O’Riley.” Electric Moon does a great job with it, bringing up the guitars a bit and slightly downplaying that excellent drum beat. “Rain” is another Beatles song that the Grateful Dead covered, and here it is done by Sugar Candy Mountain, a band based in Oakland. I really like their version, with some sweet backing vocals and moments of exploration toward the end.

“Julia” is performed by The Vacant Lots, one of only two bands from Stoned to be represented on Magical Mystery Psycho Out. They give it a sort of 1980s new wave feel, which oddly works quite well. It’s obviously a large departure from the soft, intimate feel of the original recording from The White Album. KVB, the other band to be represented on both tributes, does a somewhat slow, dark version of “Taxman.” And Kikagaku Moyo’s “Helter Skelter” is loud and intense, with violent, twisted tones that call to mind the song’s screwed up interpretation by Charles Manson.

The Blank Tapes deliver a totally groovy and fun rendition of “The Word,” a song originally from Rubber Soul. Since this was never my favorite Beatles tune, I’m surprised to find this to be one of my favorite tracks on this collection, but it’s just so damned good. “Love You To” is another highlight, and this version by Fantasmes incorporates those Indian vibes of the original and is one of the trippiest tracks of this CD. I’m also quite fond of Quilt’s rendition of “Cry Baby Cry.”

CD Track List
The Magical Mystery Psych Out: A Tribute To The Beatles is scheduled to be released on March 3, 2015 on Cleopatra Records.
Posted by Michael Doherty at 1:03 PM