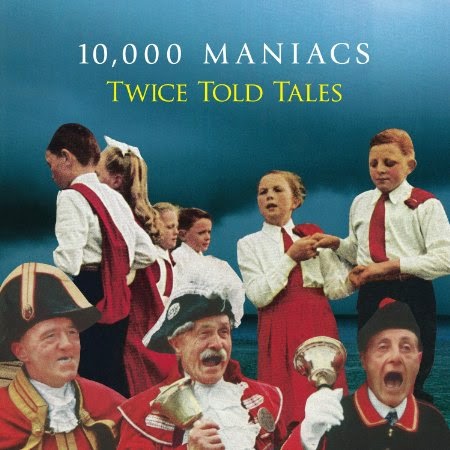 Formed in 1981, 10,000 Maniacs have gone through several changes in their three decades, the most obvious still being the departure of singer Natalie Merchant in 1993. Mary Ramsey took over on lead vocals that year, and then departed in 2001, returning in 2007. In addition to Ramsey, the current lineup includes original members Dennis Drew, Steven Gustafson and John Lombardo, along with Jerome Augustyniak, who joined in 1983, and Jeff Erickson, who joined in 2001 after the death of founding member Rob Buck. Folk music has always had a strong influence on the band, but until now they’d not released an album dedicated to that genre. Their new release, Twice Told Tales, is a collection of British Isles folk songs, but with a definite 10,000 Maniacs spin to them.

The album opens with “Lady Mary Ramsey I,” a pretty, though brief violin instrumental track that immediately gets us in the right mood. It is followed by “The Song Of Wandering Aengus,” a poem by William Butler Yeats beautifully sung a cappella by Mary Ramsey. It is after that that 10,000 Maniacs move into the traditional folk songs with their rendition of “She Moved Through The Fair,” a well-known tune that has been covered by many artists over the years, including Pete Seeger, Fairport Convention and Sinéad O’Connor. This version has a beauty, and more of a pop feel than many other versions. Mary changes the gender, singing “He moved through the fair.”

They follow that with “Dark Eyed Sailor,” which opens with a typical traditional folk line, “As I roved out one evening fair.” There is a bright, pop feel to this rendition. But one of the most catchy and fun tunes on this CD is “Misty Moisty Morning” (which is often titled “One Misty Moisty Morning”). This band does such a great job with this song, and this track is one of my personal favorites. There is such happiness in Mary Ramsey’s vocals, and there is a nice instrumental section as well. I also love what this group does with “Bonny May,” a song that’s been recorded by June Tabor and Damien Barber & Mike Wilson. This might be the best version I’ve heard, and I especially love the short instrumental section.

They deliver an excellent and intense rendition of “Greenwood Sidey” (a song also known as “The Cruel Mother” and “Down By The Greenwood Side”), letting Mary Ramsey’s vocals dominate the track. “She took out her wee pen knife/All the lee and loney/There she took the sweet babe’s life/Down by the greenwood sidey-o/She wiped the blade against her shoe/All the lee and loney/The more she rubbed the redder it grew/Down by the greenwood sidey-o.”

I’ve heard a lot of versions of the Irish folk song “Carrickfergus” over the years (it’s often played at Irish pubs, with its line “I’m drunk today, and I’m seldom sober” being sung happily by the crowds), and this one by 10,000 Maniacs is sweet and pretty, but with a certain pop bent to it. They also do a sweet rendition of “Wild Mountain Thyme.”

“Marie’s Wedding” is one of my favorite tracks, with a bright energy that should get you dancing. I particularly love the work on violin during the instrumental sections. The album then concludes with “Lady Mary Ramsey II,” leaving us as it began, with a wonderful and pretty instrumental track.

CD Track List
Twice Told Tales is scheduled to be released on CD and on vinyl on April 28, 2015 through Cleopatra Records.
Posted by Michael Doherty at 2:24 PM